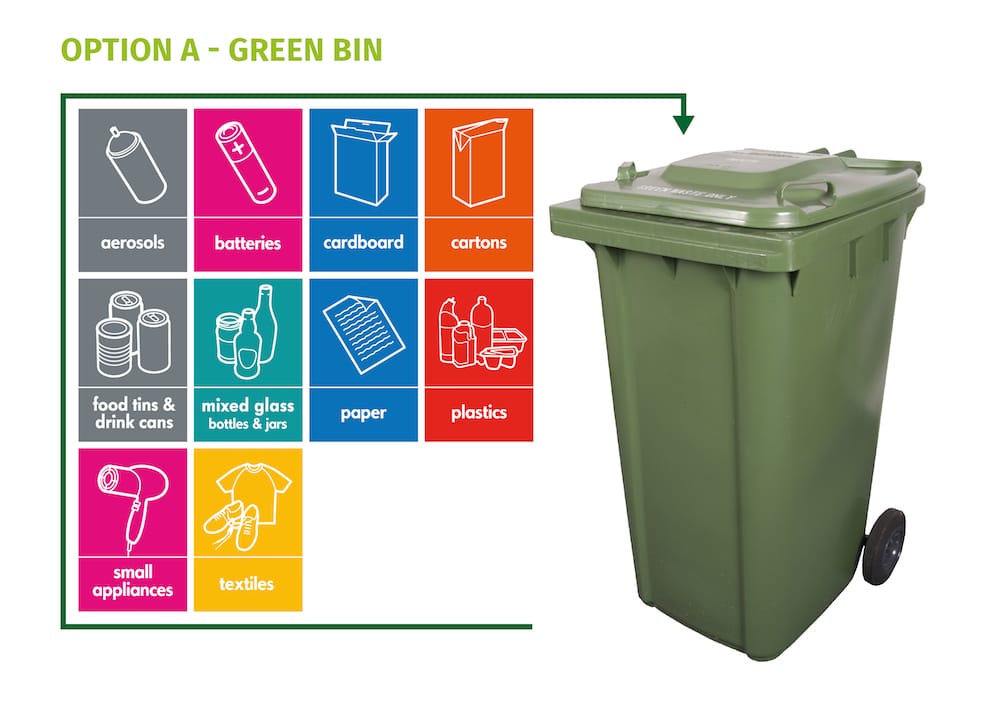 Over one third of Armagh households would recycle more if they had one bin for all recycling.

An NI-wide recycling poll, commissioned by Re-Gen Waste, carried out in March 2019 revealed that just over one third of householders in Armagh rated bins being too small as being the biggest issue they have with their collection service, with 35% saying the size was inadequate.

– Of those who only recycle when convenient for them, 38% said they would recycle more if they had one bin for all mixed dry recycling instead of insert caddies or kerbside boxes
– 72% of those who complained, asked for their recycling capacity to be doubled

Joseph Doherty, Managing Director of Re-Gen Waste Ltd said: “These survey results indicate that prioritising simplicity and convenience is the best approach to ensuring a high level of household recycling which can be achieved with commingling in one recycling bin, Option A.

“This has never been more apparent than during the Covid19 lockdown. Consumers have had to change their shopping behaviours, which in many cases has resulted in more transactions moving online.

“Households are now producing so much cardboard and packaging waste due to internet shopping, that small domestic recycling boxes simply cannot cope.

“I was dismayed to hear Councils across the UK advising householders to throw their recycling materials into their black bins, when their recycling services were disrupted.

“There have been major issues with fly tipping across many Council areas, with all manner of household waste being dumped, leaving ratepayers to foot the clean-up bill.

“The councils we with work in Northern Ireland, England and Scotland tell us that household friendly schemes such as commingling recyclables in wheelie bins, are much preferable to residents than pre-sort schemes, using small containers and that working with advanced Material Recycling Facilities (MRF’s) like ours, is actively improving their recycling rates.

“The top five NI Councils with the highest household dry recycling rates (DAERA LAC Municipal Waste Report (2018/19), use a commingled service including glass. They also have the highest landfill diversion rates, which is great news for the environment.

“Some argue that high quality recycling is reliant on having materials sorted directly by householders as opposed to mixed or co-mingled collections. This is simply untrue, we have invested tens of millions of pounds in cutting edge
plant technology to ensure that our recyclate materials are of high quality for use in manufacturing within Northern Ireland, UK and Europe.”

Mr Doherty also queried the notion that a commingling service was more expensive to the ratepayer, in comparison to using a Triple Stack kerbside sort option.

He said: “It is my understanding that it takes up to three times longer for the proposed Triple Stack kerbside sort system to be emptied when compared with the time taken for a collection crew to empty a commingled bin.

“The knock-on effect of this will be shorter collection rounds as they will not be able to cover the same distance as a commingled system over the same period of time. That means more collection vehicles to service households in a
Council District, more vehicle drivers and collection crew, therefore it will be more expensive to deliver the service on an annual basis.”

The Council is running a consultation process on the future of recycling arrangements across the Armagh, Banbridge and Craigavon Borough Council area.

To have your say visit https://armaghbanbridgecraigavon.citizenspace.com/environmental-services/public-consultation-on-mdr-collection-options/consultation/intro/