Young stars stole the show at the Tullyroan Oval 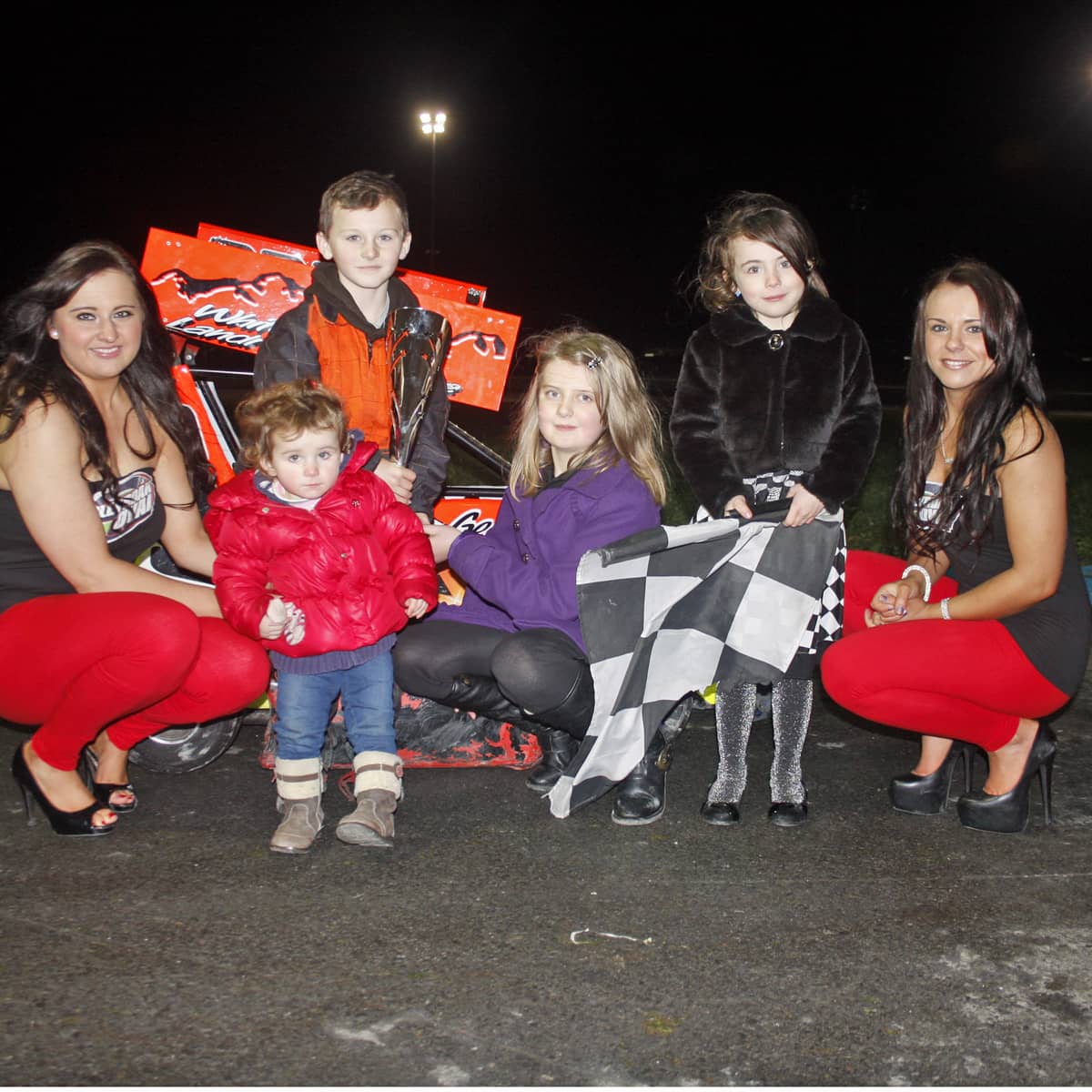 The young 6-11 year old stars of tomorrow in the Ninja Karts formula stole the show at the Tullyroan Oval Winter Series meeting on Sunday afternoon. Top quality racing was the order of the day as Adam McFall, Shea Fegan and Adam Weir shared the big wins between them after some frantic dicing. In the other formulae, Birches man Dave Haugh was the star of the National Bangers, World Champion Shane Murray won the 2.0 Hot Rods, Denver Grattan the Superstox and Del McLaughlin the ProStocks

The opening event of the day for the Ninja Karts was the Midway Autopoint sponsored Individual Achievement Award, open only to those young drivers who had yet to win a race during 2014. Broughshane’s Adam Weir was always going to be a hot favourite in this one, and he wasted little time in swooping through from the rear of the field to take up the running. He eased through the remaining laps to take the win, with Jack Morrow and Scott Hosie having great runs to second and third respectively. The sponsors then presented all the young drivers with a nice prize each.

Next up was the 2014 Hollytree Farm Champion of Champions for all the race winners in 2014, and it turned into a truly fabulous race. Jack Hazlett, who has improved immensely in recent meetings, set the early pace but he soon had the star men chasing him down. Aaron Ward was the first to challenge but Hazlett staved him off, and did likewise to Irish Champion Matthew Nicholl. Adam McFall found a gap down the inside though and sped through to take the flag ahead of Hazlett and Nicholl at the end of a classic encounter.

Hazlett made amends in the solitary heat by winning ahead of Lily Gallagher and Joel McPeake, before Belfast’s Shea Fegan powered through to win the final in some style over Stewart Hanna and Morrow.

Birches ace Dave Haugh made short work of the National Bangers feature race, the 2014 Tullyroan Challenge Cup. Despite the presence of several Scottish drivers, he took the win ahead of Neil Naismith and Willy Ogilby.

Haugh was again unstoppable in the Allcomers race in his unusual mount of a Granada hearse, tearing home ahead of Scotsman Naismith and Sheldon Murray.

A short but eventful Destruction Derby had a huge wrecking train on the exit of turn two, and it was one of the survivors Murray who finished off Scotland’s Ryan Scott with a big head on to take the win. Murray also took both the Best Presented Car Award and the Entertainer of the Day trophy, whilst the Best Wreck went to Rodney Herron’s Volvo.

Before the opening 2.0 Hot Rods event there was a very poignant minute’s silence observed by the drivers in memory of their fellow racer Lee Cherry who sadly passed away recently. Gareth Thompson, behind the wheel of the former Wayne Woolsey car, took victory in the opening heat over World and National Champion Shane Murray and Irish Champion Joel Richardson. Jack Boal made a welcome return to victory lane in the second race of the day, edging out Stuart Cochrane and Murray at the flag. The final saw Davy Potter set the early pace, before he clashed with Thompson. That opened the door for Murray and he surged on to victory and the Bevan Motorsport trophy. Thompson held on for a creditable second and he could well be one to watch in 2015 in his new car. Cochrane, Richardson and Sean Dynes rounded out the top five.

The Superstox formula continues to grow by the meeting, with debuts this week for Davy Clarke, Andrew Morrow, David Beattie and Adrian McKinstry, and we also once again had three lady drivers in the field too. Star grader Denver Grattan was again on top form to slice through to take the opener ahead of Gregg Hyndman and David McMenemy. Heat two looked all set to go Hyndman’s way until he picked up a puncture after hitting the front. That opened the way for Portadown’s Lee Davison to take the win over Grattan and McMenemy.

Grattan again made light work of the slippery track in the final to lead home McMenemy, Davison and the impressive Darren Bevan at the flag.

A grandstand finish on the last corner of the opening ProStocks heat saw Raymond Harper take victory ahead of Stephen McCready and Leonard Dunn, before usual Thunder Rod driver Del McLaughlin came to the fore in the remainder of the meeting on his first outing in the contact formula. He took the second heat ahead of Harper and Conor McElmeel before netting another controlled victory in the final over Dunn and James Goldie.

The next outing at Tullyroan Oval is the annual festive meeting on Sunday December 28th (2pm). The feature event will be the Big Van Bangers in their Van-dalism 2014 bash, with 2.0 hot Rods, Superstox, Ninja Karts and 1300 Stock Cars also on the bill.