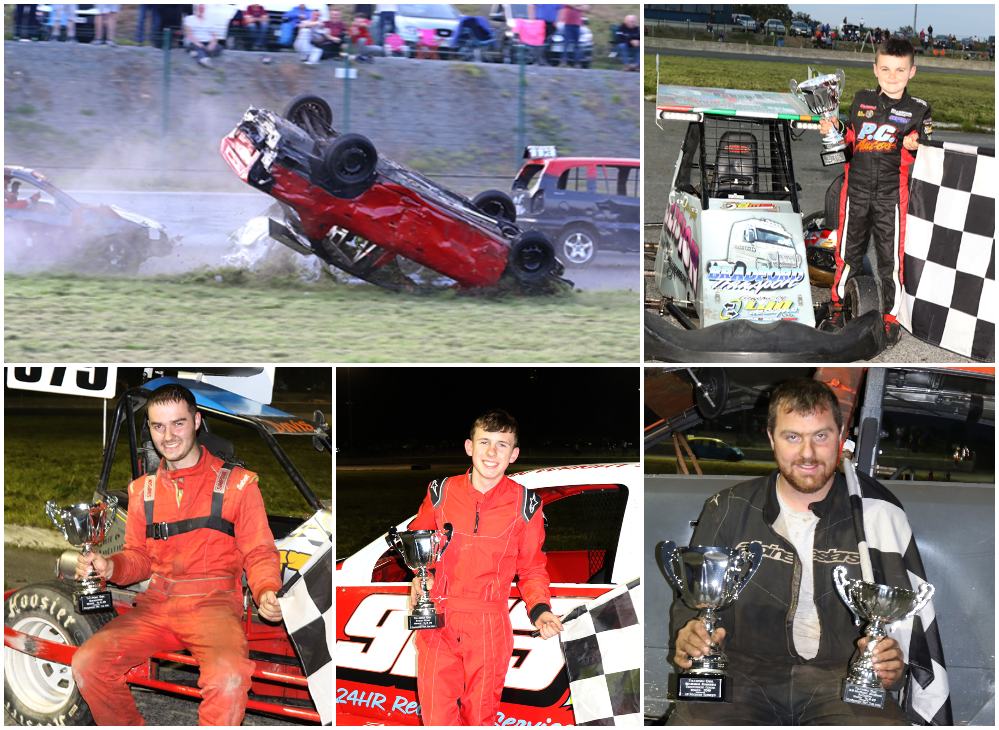 There was a welcome return to racing at Tullyroan Oval on Saturday night, with a fine turnout of drivers entertaining the socially distanced fans throughout the evening.

Sixteen-year-old Ballymena driver Adam McFall (bottom centre) was the star of the night, as he marked his graduation to the senior ranks with a faultless hat-trick of wins in the well subscribed Stock Rods division. Crumlin’s Michael Woods raced to glory in the 2.0 Hot Rods formula, with Garvagh’s William McFaul the winner of a destructive 2L National Bangers Tullyroan Challenge Cup.

The Superstox saw Portglenone’s Ed Davis (bottom left) steal through for a last gasp win, whilst young Antrim driver Leyton Hughes was the star of the outstanding Ninja Karts as he raced to a heat and final double.

An excellent field of Stock Rods were complimented by welcome visitor Gary Nicholls, with Adam McFall ominously lining up in the novice grade on his first meeting in the senior ranks.

The former Junior Productions Irish Open Champion quickly got his head down, racing off to eventually land the win by over half a lap! Whilst it was a win many had expected from the talented youngster, he then repeated the feat with ease in heat two to really make everyone sit up and take notice! Joshua McMullan and Philip Wilson chased Adam home in the opener, with Wilson and Colin McNiece completing the top three in the second race.

Two wins saw McFall immediately rise to the yellow grade for the final, where things were always going to be that bit more difficult. He quickly got into his stride and scythed through the other novices, although a clash with leader Ryan Andersen brought about a race suspension. On the resumption Colin McNiece edged right onto Adam’s tail, but he showed experience well beyond his years to land the victory and complete his hat-trick. Even a post race Stewards Enquiry into his clash with Andersen couldn’t deny Adam, as McNiece and Rick Purdy completed the podium finishers.

Another fine showing of 2.0 Hot Rods produced some close, fast racing all evening. Londonderry based veteran Colin McFarland rolled back the years to land both heat wins, the former Super Rods World Champion showing some good pace behind the wheel of the Citroen Saxo normally used by his son Dean. Michael Woods and Ryan McClure chased Colin over the line in heat one, before he just held off the same duo in a blanket finish to heat two.

With McFarland upgraded for the final, it was Woods who made good his escape early on ahead of Jonny McMillan, with McFarland again driving a superb race to hold off a huge pack of the star names. Woods reeled off the laps to land a deserved victory, with McMillan and Drew McKeown rounding out the top three at the chequered flag.

The 2L National Bangers fielded an excellent entry, and the Tullyroan Challenge Cup race got off to a spectacular start as Dubliner Stevo McGrath went for a big roll on the home straight as he took the green flag. He was unhurt, and at the resumption of hostilities there were some huge hits around the raceway, with Tony Gillespie’s Vauxhall Limo a particular target. Marty McKiernan also took a heavy fencing too from Deano McGrath, all this as Garvagh’s Irish Champion William McFaul raced clear to take the win over Paul Compelli and Tom Brown.

The Allcomers event saw Stevo McGrath back in action and he despatched Brown in no uncertain terms, as Donemana’s Leonard Dunn took the flag ahead of Steven Bolton and Compelli.

An entertaining Destruction Derby rounded off the evening, with Gillespie’s Limo and Jake Macnicol amongst those on the receiving end of some big hits. The result was settled by a great head on between Dunn and Deano McGrath, with McGrath’s Mondeo emerging victorious.

A sprinking of new Superstox was great to see amongst their more than respectable entry, as Steven Haugh raced ahead in heat one to take the chequered flag. He was unfortunately docked two places by Race Control for jumping the start, handing the win to Jordan Robinson over Irish Champion Kyle Beattie. Haugh made no mistake in heat two, this time winning ahead of Jamie McCann and Beattie, after Del McLaughlin was this time dropped from second for a jump start.

Haugh took early control of the final too, and just when he looked home and dry he picked up a puncture which ended his challenge. Steven really has been dogged by some cruel luck this year, as he suffered exactly the same fate when leading a final back at the last Tullyroan Oval meeting in March. Ed Davis duly accepted the top spot and picked up his first ever feature race win in the Superstox, ahead of Beattie and Keith McAreavey.

The 6-11 year old Ninja Karts stars again thrilled the crowds, with a number of newcomers and visitors on show. Scotland’s Eevie Ford led the majority of the opener before being undone by a late caution period for a collision. That closed the field together and Irish Champion Leyton Hughes sped past to take the win. Heat two saw Ford again pipped at the post late on, as this time Toby Tyson snatched a last gasp win over Eevie and Ryan Berry.

The final once again saw Ford out front before a late caution period brought the star graders into contention. Ford and Berry had no answer to Hughes’ pace at the restart, and he raced home to take the silverware over Ford and Berry.