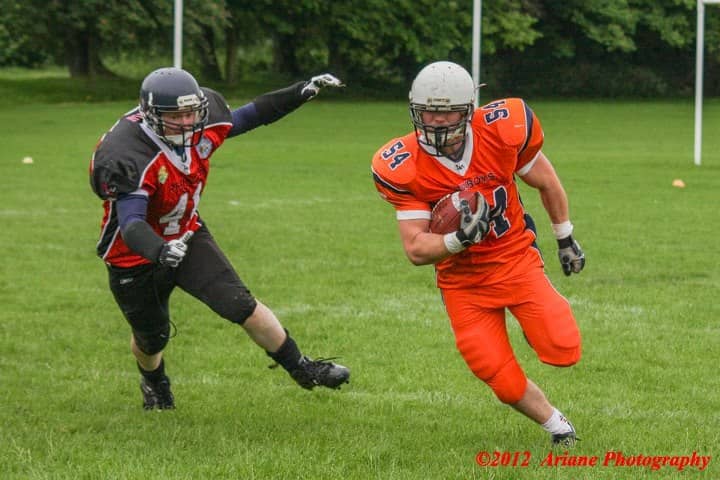 After one week off the Craigavon Cowboys continue their 2014 season by hosting Trinity College Dublin in Chambers Park, Portadown with a 2pm kick off this Sunday. Trinity were Shamrock Bowl semi-finalists last season as well as Atlantic Cup runners up and are sure to play some quality football, setting this game up to be a cracker.

It’s been a long time since these two clubs have locked horns on the field, the last meeting taking place four years ago in 2010. On that day the Cowboys ran out 17-8 winners at Brownlow Sports Complex, though that result will have little bearing on Sunday’s game with each club having come a long way from 2010.

While the Cowboys have only played one competitive game so far this season, a 28-0 home defeat to the Belfast Trojans, the students have completed three fixtures. With victories over the University of Limerick Vikings, the West Dublin Rhinos and the Carrickfergus Knights Trinity are the form team of the Shamrock Bowl Conference.

The Cowboys struggled on offence last time out against the Trojans, particularly in the first half. However after an improved second-half showing and a week of training to iron out some of the kinks the boys in orange will be quietly confident of a better performance, particualry after some impressive, tough running from Mark Hill and John Murray. Trinity’s stingy defence have only conceded 27 points over their three games however they did ship 18 points to a Carrickfergus Knights side the Cowboys held to 8 points.

On defence the Cowboys will be buoyed by a commendable showing against the Trojans in the opening game, conceding only two touchdowns to the defending champions. Trinity will present a different threat to defend, with QB Dan Finnamore having thrown 7 touchdowns already this season their aerial attack is a danger, as is running-back Rob McDowell. The Cowboys will be looking to the likes of safety Tom Neal and corner James Trouton to shackle the students passing game.

This game is set to be another cracker with plenty of talent on display and with a later kick-off time of 2pm there’s no reason not to get down to Chambers park to cheer on the Cowboys!