Traders to be briefed on Giro d’Italia’s pedal power 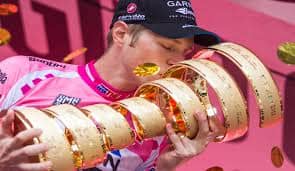 Briefing sessions with traders are expected to take place shortly as the city and district plans to cash in on this year’s prestigious Giro d’Italia cycle race, Armagh I can reveal.

SF Councillor Cathy Rafferty, speaking at a recent Armagh City and District Council scrutiny committee meeting, stressed the need for traders to be brought on board with May’s event so they could gain maximum benefit.

With regard to the Giro d’Italia, the Strategic Director of Regeneration and Development Sharon O’Gorman said this was viewed as a key event to be taken forward with traders and it was very much on the agenda to keep them informed and involved.

She said it was hoped to hold briefing sessions with traders as soon as possible after Christmas.

The confirmation arrived at the official launch of the cycling event in Italy in October – with Northern Ireland selected to host the Grand Partenza, or ‘Big Start’, on Friday, May 9.

The local stages will run from May 9 to 11, starting in Northern Ireland and coming to a close in the Republic, and also passing through South Armagh before crossing the border.

Considered second only to the Tour de France in terms of cycling prestige, the Giro d’Italia features a start on foreign soil – with three days of cycling set to thrill domestic race fans and thousands of anticipated tourists in just four months time.

The route from Belfast to Dublin over the May weekend will also include appearances by some of the world’s leading names in County Armagh areas.

Cyclists will fly from Dublin to continue the race in Italy.

Richhill’s Stephen Gallagher – a former professional cyclists and now joint owner of Dig Deep Coaching – was selected by the organisers, RCS Sport, to map out the route.

“Cycling in Ireland is currently booming and we are hopeful that Nicolas Roche, Dan Martin and Philip Deignan will all be competing here next May after stellar performances from all three in 2013.”

Statistics from last year’s Giro d’Italia list the broadcast to 165 countries, reaching 125 million households and a global audience of 775 million.