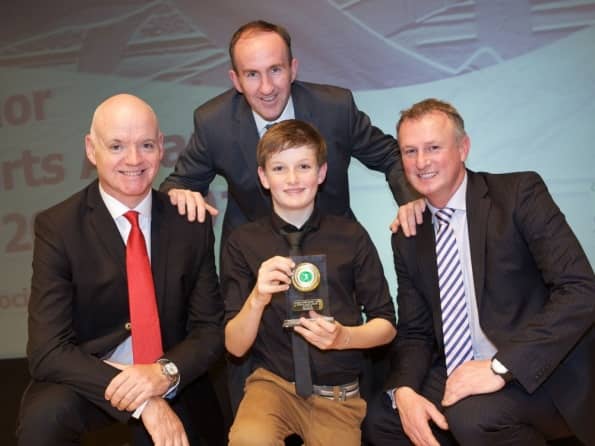 Success on the World stage by Shannon Lyness and Rosalind Connolly was recognised recently at the Craigavon Junior Sports Personality of the Year awards ceremony.

A gala evening was held at Craigavon Civic and Conference Centre with Northern Ireland manager Michael O’Neill the special guest, who presented every nominee with a certificate of achievement.

There is an abundance of sporting talent within the borough and the committee received over 50 nominations including 23 teams across six categories – making it a very exciting night for all involved. This year also saw Rushmere come on board as the main sponsor.

Speaking at the event, Michael was extremely impressed with the calibre of the young athletes.

He said: “Every young sportsperson here at this ceremony has a lot to feel good about, each individual has dedicated their effort and achieved the highest accolade possible in their own particular sport. There is a lot for everyone to take pride in.”

The awards evening began with the presentation of the Junior Sports Bursaries to 14 of the borough’s up-and-coming young sports people who have the ability and potential to compete successfully at the highest level in their sport.

The Minor Girl award, sponsored by the House of Sport, went to talented handballer Niamh Coleman. Niamh was the most successful player at the World Championships, winning two individual gold medals. She also won three individual Ulster Championship medals and an All-Ireland title.

In the closely-contested Junior Girl category, the award was won by Shannon Lyness for her exploits on the international scene in volleyball. During 2012-2013, Shannon represented Northern Ireland in the World Championships in Belgium and also helped Craigavon Aztecs win the National League.

In the boys’ categories, cricket star Jack Carson took the honours in the Minor section, which was sponsored by The Beautiful Game. Jack had a tremendous season which saw him selected for Ireland under 13s and also accept an invite to play and train with Sussex County.

The Junior Boy section was won by Declan Mulholland from Clann Eireann Cycling Club who had numerous wins in European Youth Olympic Selection cycling events and is a member of the Cycling Ireland Talent Team 2020.

All of the individual categories were hotly contested and the team awards were no different.

Clann Eireann collected the Mary Canniffe Award – a special sporting award in recognition of a truly memorable year of sporting success for the club across cycling, gaelic football and handball. The club made history by becoming “the most successful in the World” when they returned home with no fewer than 12 gold medals and five silver at the World Championships.

A special achievement award was presented to World gold winner, Portadown’s Rosalind Connolly, for her performance at the Special Olympics World Winter Games in South Korea earlier this year. Rosalind excelled in Alpine Skiing, winning the gold medal in the final of the Super G event.