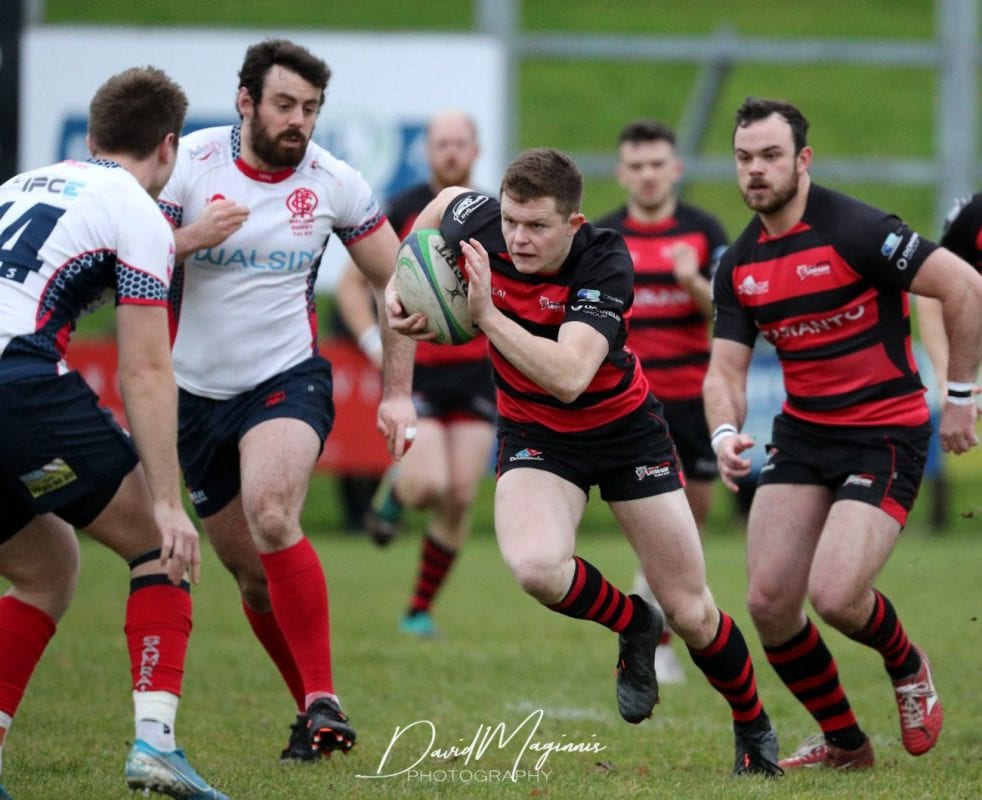 City of Armagh made it three wins in three weeks when they returned to action in the Energia All Ireland League on Saturday to complete a league double over Malone RFC.

Conditions were dry with a stiff breeze favouring the home side as Malone kicked off. It was the visitors who took the early initiative and a penalty for a high tackle allowed Cormac Fox to kick for a lineout deep in Malone territory.

The Armagh pack secured possession through Nigel Simpson and set up a driving maul. Gerard Treanor broke on the blind side but the scrum half was unlucky to put a foot in touch. Malone cleared to their 22 but Armagh set up another lineout maul, a tactic that had proved very effective in the reverse fixture at the Palace Grounds. An indiscretion by the visitors however led to a penalty for the home side.

Armagh then capitalised on a Malone lineout overthrow and won a penalty midfield, 30 metres out. The chance to open the scoring was declined in favour of the lineout option but this backfired with a crooked throw in the blustery conditions.

The visitors continued to dominate the opening quarter and Malone were under pressure when number 8 Azur Allison received a yellow card for a tip tackle on Armagh’s Andrew Willis. The penalty was kicked to touch and this time Armagh moved the ball wide where Chris Colvin, on his return from injury, almost broke clear.

A forward pass was called and the Orchard County side then turned over Malone possession at the scrum. A number of phases were set up before full back Timmy McNeice crashed through the centre to score under the posts. With 18 minutes on the clock, Fox’s conversion gave City of Armagh a deserved 0-7 lead.

From the restart, Malone won a lineout on the Armagh 22 but the visitors stole possession and Treanor cleared to halfway. A Malone handling error in midfield saw Armagh win a scrum penalty and another attacking lineout was set up. The ball was moved through the backline and Shea O’Brien slipped the ball to Andrew Willis for the winger to cross in the corner for Armagh’s second try on 26 minutes. The conversion was unsuccessful but Armagh were now leading 0-12.

With half an hour played, Malone won a turnover on the Armagh 22 but weren’t able to hold on to possession and Armagh with a penalty, cleared to halfway. A late tackle on scrum half Treanor saw Matty Dalton receive a lecture from the referee.

The penalty allowed the visitors back into the Malone 22 and they finished the half strongly, looking for a third try. The Armagh forwards were enjoying this dominant spell but a knock on by Willis saw a scoring chance lost. The half time whistle blew with Malone relieved only to be 12 points in arrears.

The second half commenced and Malone immediately showed more urgency in their game after Chris Henry’s halftime talk. Centre Callum Smith made a line break right up to the Armagh 22 as the visitors scrambled back in defence.

A knock on let Armagh off the hook as Eoin O’Hagan replaced Peter Lamb in the front row. An Armagh box kick saw Malone counter strongly but another handling error let them down.

Ten minutes into the second period and Armagh turned over Malone possession on their 22. Fox moved the ball swiftly to the right wing where Andrew Willis beat his marker on the outside to score his brace of tries. Leading 17 nil, the visitors were well in control of the match.

The home side however knew they needed to respond. Outhalf, Jack Milligan made a break into the Armagh 22 and Malone then had their best attacking spell in the match.

A number of phases by the Malone pack saw them just 10 metres from the Armagh line however their good work was undone when they were penalised for holding on after the tackle. Fox cleared to halfway and Armagh stole lineout possession to set up another attack.

Malone then received a lifeline on 57 minutes when Ireland U20 centre, Stuart Moore intercepted on the halfway line and sprinted 50 metres to score a converted try under the posts.

The scoreline was now 7-17 and Malone were spurred on to run the ball from deep at every opportunity. The Armagh defence however had been exceptional all day and the home side were frustrated in their attempts to break through.

On 60 minutes, Jack Treanor joined the action, as did James Hanna, returning from long term injury.

Harry Doyle also got a run out at scrum half and the fresh legs saw Armagh continue to dominate possession and territory. A couple of scrum penalties reflected the great work by Phillip Fletcher at the heart of the Armagh scrum and the final 10 minutes was spent in the Malone 22.

The match was coming to a close with the visitors pushing for a bonus point try and with a minute to go, the fourth try eventually arrived when Shea O’Brien crossed to the left of the posts. The conversion was unsuccessful but the final whistle blew with City of Armagh victorious by a scoreline of 7-22.

This was an impressive performance by City of Armagh, perhaps their best of the season. With five Ulster players on the Malone side, the visitors dominated the match from start to finish, with the Armagh forwards all playing with energy and commitment and captain Robbie Whitten leading by example.

Chris Colvin made his presence felt in the backline on his return from injury, his first match in six weeks. The experienced centre ensuring the team’s defensive duties were largely sound all day.

With Naas winning comprehensively at home, this was a crucial result for City of Armagh. Yet again, the league is proving to be incredibly tight and Armagh’s victory sees them climb from eighth to fifth position.

The senior squad can now enjoy a two week break from AIL action, before a three match run of fixtures in February against three of the top four teams in the current league standing.

Next month will be challenging, starting with league leaders, Highfield’s visit to the Palace Grounds, but the Armagh coaching team are more than happy with where the team currently sits in the league.