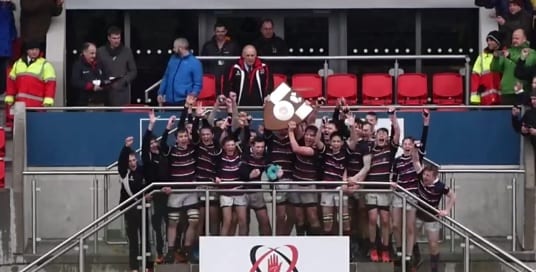 Royal School Armagh Under 15s team make history by winning the Medallion Shield for the first time in the school’s history.

Played at a very wet and windy Kingspan Stadium, both sides displayed some excellent skills and no lack of purposeful endeavour in the difficult conditions.

Armagh got off to a dream start when Peter Taylor got over for a try after just three minutes, the centre showing a blistering burst of speed to get over in the left corner. Ethan McAtarsney added the superb touchline conversion to open up a 7-0 lead for Armagh.

There were little further clear cut chances in the remainder of the half with both defences standing up well to any attacks.

Armagh added a penalty shortly after the restart to extend their lead to 10-3.

On 48 minutes Malone slotted over another outstanding penalty from almost 40m to reduce the deficit to 10-6.

In the final ten minutes Friends’ piled on plenty of pressure in search of a game-winning try but the Armagh defence remained resolute as they held on for the historic win.

The Danske Bank Medallion Shield was streamed live on Facebook, with guest commentary from Ulster players Chris Henry and Paul Marshall. You can watch a re-run of the game above.