A late drop goal proved decisive in this tie 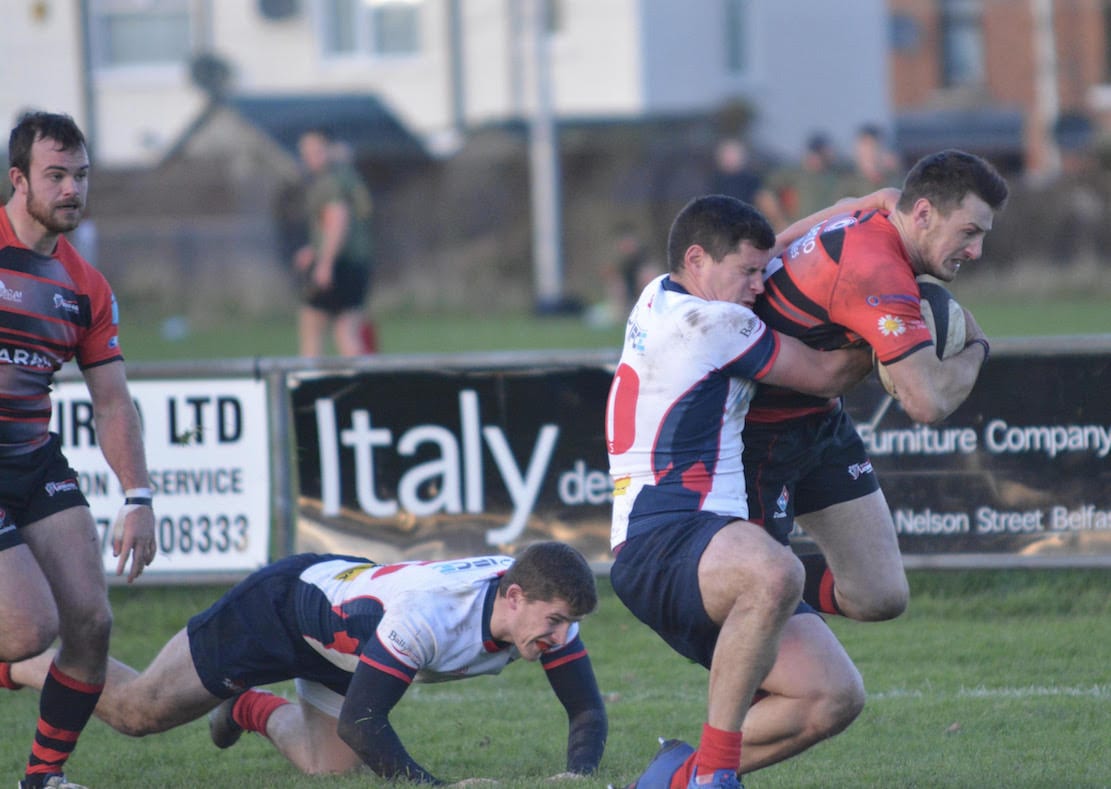 Both Malone and Armagh have a large travelling support that is vocal in its passionate, boisterous and what can be described as raucous support for their teams.

The climate was set as both sets of club officials and supporters clapped and cheered their teams on to the pitch.

What we witnessed on and off the pitch did not lack in intensity as we witnessed a match of total commitment and no shortage of skill from two determined teams who realised the importance of the match.

Referee Chris Busby made it clear from the outside he was going to let the game flow even though the offside lines were repeatedly infringed that denied both teams space to create attacking opportunities.

The opening exchanges were physical with both defences dominating with Malone backs showing early promise through centres Nathan Brown and Michael Cartmill.

It took 10 mins for the Armagh team to break into the Malone 22 lead by their Captain Ali Birch, Robert Whitten and the mobile loose head prop Daryl Morton.

When it looked like the visitors had to score Malone turned over ball on their own line for scrum Half Connor Spence to clear the danger.

Unfortunately the returning Phil Lucas making his return to the Malone team had to eave the field after 15 mins with an injury to be replaced by Josh Davidson taking his place in the second row.

The first 20 mins continued to produce few opportunities with no sign of a break through.

The second quarter went on to be dominated by the home side who went on to score 15 unanswered points.

The first score came when second row Michael Shiels made a 20 metre break to the Armagh five metre line.

The Malone forwards were there in numbers for back row forward Joe Dunleavy pick up and score the 1st try. Winger Mark O’Connor failed to add the conversion.

With Malone out half Josh Pentland attacking space he crashed through the Armagh cover to put centre Michael Cartmill in at the posts for O’Connor to add the points and increase the Malone lead to 12 – 0.

Armagh Head coach Willy Faloon made a change to his under pressure front row with Phillip Matthews coming on to replace Philip Fletcher.

When Armagh were penalised on their own 10 metre line up stepped Mark O’Connor to land a 40 metre penalty to leave Malone leading 15 – 0 at halftime.

The third quarter of the match belonged to Armagh with Captain Ali Birch, Neil Faloon and Daryl Morton creating openings through their strong carrying.

This pressure paid off with their out half Cormac Fox landing a penalty to reduce the Malone lead to 15 – 3.

Malone Head coach Paddy Armstrong brought on Andy Bryan’s to replace Mark O’Connor on the wing. Armagh were in the ascendency at this stage with the Malone team struggling to get any foot hole in the game.

The Armagh bench were making an impact as the home side struggled to with hold wave after wave of attacks with the visitors looking to attack the wide channels.

The Armagh backline just looked sharper with ball in hand.

Disaster then struck for Malone as referee Chris Busby exerted his influence. First up was replacement winger Andy Bryans as he attempted to slow up an Armagh attack deep on the Malone line.

The referee had no hesitation in showing him a yellow card. Armagh capitalised from their field position to make the extra man count as replacement winger Ryan Purvis powered over to score a try with Fox unable to add the conversation to reduce the Malone lead to 15 – 8.

When back row forward Joe Dunleavy was penalised for a high tackle the noise for a yellow card from the touchlines was answered as referee Chris Busby showed his second yellow card.

Now down to 13 players with second row Josh Davidson struggling with cramp you could see only one winner in this match. A further Cormac Fox penalty reduced the Malone lead to 15 – 11.

Urged on by Captain Ross Todd the forwards won a scrum just inside the Armagh half. With only seven forwards the Malone forwards drove the Armagh pack back several yards to win a penalty.

Up stepped Rory Campbell from 35 metres to increase the Malone lead to 18 – 11 with just under 25 minutes played in the second half.

With Andy Bryan’s time up there was an expectation he could return to the pitch. The touch judge said no.

Again Armagh were able to use their two man advantage for out half Fox to put replacement back Timothy McNeice in space to score his teams second try with Fox adding the points to level the match at 18 – 18.

Bryan’s was allowed to return to make Malone up to 14 players. Some how the Malone players dug deep after conceding 15 points in this 10 minute spell.

From the resulting scrum, out half Josh Pentland kicked to the corner for winger Andy Bryan’s to palm the ball down into the hands of supporting full back Jack Owens to shrug off a tackler and touch down for his teams third try.

Despite the cross field wind winger Rory Campbell landed a magnificent touchline kick from the corner of the Armagh twenty two to make it 25 – 18 to Malone against the run of play.

Malone were made up to 15 players with the return of Joe Dunleavy for the final eight minutes.

This Armagh team were not giving up without a fight and their pacy three quarters continued to be a threat.

Winger Robert Faloon then scored his teams 3rd try with Fox unable to land the conversion.

With the score at 25 – 23 to the home side the clock showed we had less than five minutes left.

Within a minute Malone had infringed with Fox landing a 35 metre penalty to give his side a 26 – 25 lead for the first time in the match with minutes to play.

We did not have long to wait for another twist in this all absorbing match.

From the kick off Malone Captain Ross Todd was able to palm back for his forwards to launch one final attack. They set up ball 25 metres from the Armagh posts for out half Josh Pentland to kick a superb drop goal to restore the Malone lead to 28 – 26 with two minutes to go.

Was there still a way back for Armagh? With the game in injury time Malone had control of the ball only to allow the ball to spill loose from a set scrum for the visiting side to attack once small.

Eventually Armagh knocked on and five minutes into injury time this incredible game of rugby ended with victory to the home side.

We have witnessed many exciting games at Gibson Park but we could not have anticipated the drama that unfolded out on the pitch.

Rugby was the winner on the day with these two teams due to meet again at the Palace Grounds on November 18 in the semi finals of the First Trust Senior Cup.

The seconds played Clogher Valley at the Palace grounds on Saturday with another much changed side and were below par for most of this conference league game.

Clogher were still looking for their first win this season and with the local seconds undefeated, the game turned out to be a feisty encounter with no quarter spared.

From the kick off both sets off forwards battled for supremacy with Clogher having the edge in the scrums and Armagh eager to carry ball into contact.

With play moving end to end, the stale mate was broke when Clogher elected to accept a simple penalty on 20 minutes in front of the posts, 3-0 to Clogher.

They followed this up with an unconverted try on 35 minutes when slick inter passing led to a try in the corner. On the half time whistle, Harvey Young converted a penalty after having missed an earlier more difficult attempt, 8-3 to Clogher.

The game restarted with Armagh determined to reduce the number of errors and step up to their usual intensity which had being missing in the first half. Five minutes after the restart, Crummie and McKeever worked the ball out to Misi Bogitini on the half way line where he made good yardage into Clogher territory.

When the ball was recycled several times, Crummie sailed over in the corner for a try. With the missed conversion,
the scores were level at 8-8.

With the coaching staff expecting the home team to push on, Clogher had other ideas and upped their game to bring play up to the Armagh line on two occasions where they scored two successive extremely
soft tries.

At 18-8 and only 15 minutes remaining, the game was in danger of slipping away from Armagh, however the team were determined to take the game to Clogher and what followed was their best spell of the game.

With Martin, Hooks, Kennedy and Finn probing the Clogher defence and scrumhalf Campbell linking with the backline, Clogher were having to scramble their defence on numerous occasions as Armagh were sensing that the game could
be saved.

With play again taken to the line, ball was switched from right to left were Campbell made a dart for the line only to be stopped short. Good support play from Crummie saw him pick up and dart over untouched at the posts.

Young’s successful conversion meant Armagh had levelled the game at 18-18 as the referee blew the final whistle.