Improvements needed before All Ireland League kicks off 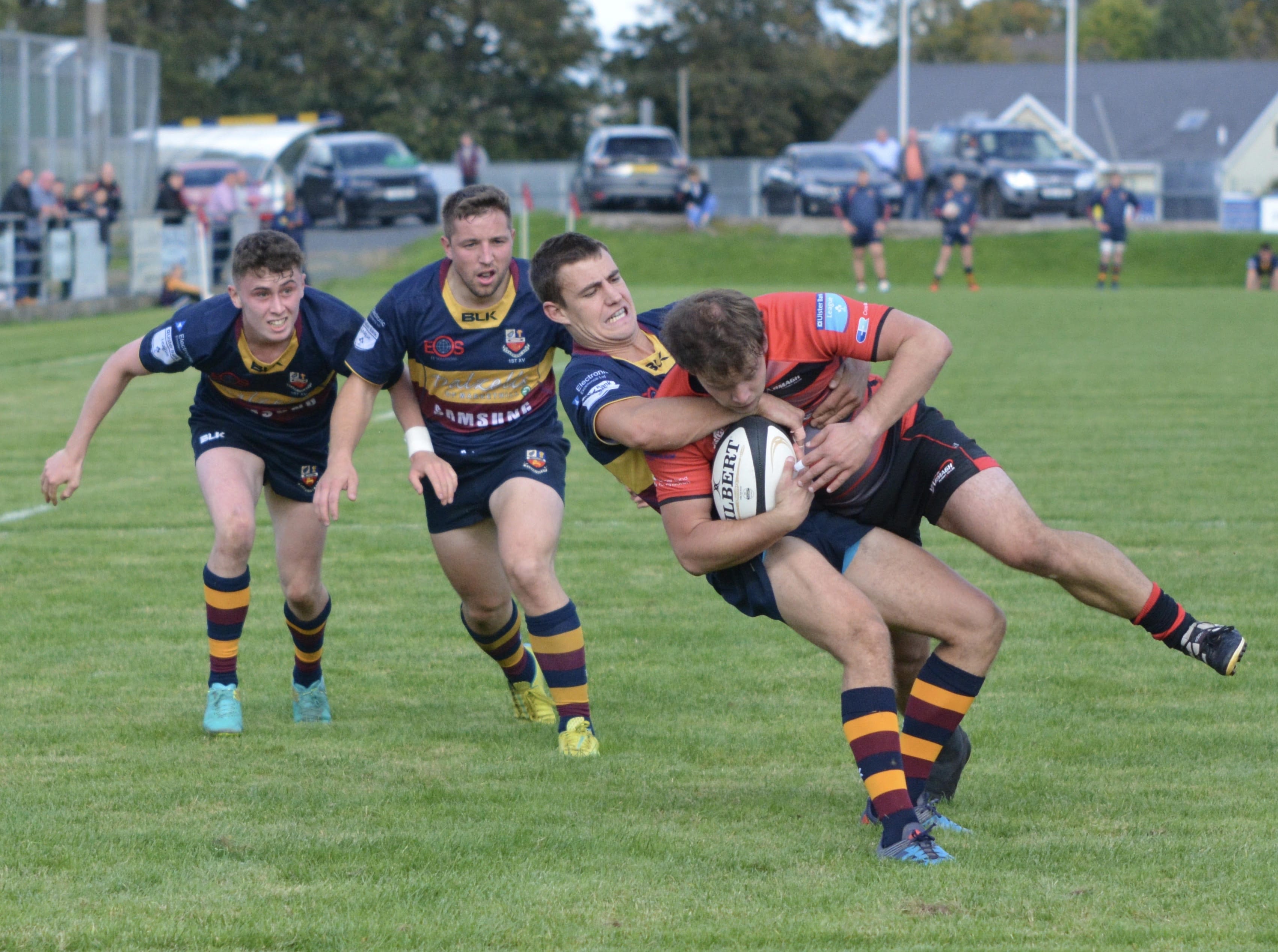 Chris Cousins makes a charge in the first half.

Banbridge kicked off in perfect sunny conditions at Rifle Park where City of Armagh were the visitors for the weekend’s SONI Premiership fixture.

The home team dominated the early stages and Armagh found themselves pinned back in their 22. The visitors’ defence held firm and a number of turnovers kept Banbridge at bay.

It was 15 minutes before Armagh entered Banbridge territory but they couldn’t take the momentum away from the home side.

With 20 minutes on the clock Banbridge would have been disappointed not to have converted their pressure into points but then the Armagh backs dropped the ball on their 10 metre line and it was hacked up the pitch for John Porter to score the game’s opening try. Adam Doherty converted to give Banbridge a 7-0 lead.

On 23 minutes Armagh had their first serious attack of the match but a handling error saw the chance of a score disappear.

The referee however was playing advantage and awarded a penalty on the 22 for Cormac Fox to open Armagh’s account at 7-3.

The visitors were now enjoying more possession and on 35 minutes were rewarded with a try. A crossfield kick was secured in the Banbridge 22 and ball recycled for flanker Nigel Simpson to cross to the left of the posts. The conversion by Fox now put Armagh ahead 7-10.

As the halftime whistle approached, Banbridge finished the half as they had started, pinning Armagh back in their 22.

The visitors strayed offside and Doherty converted the penalty to tie the match 10-10 at halftime.

The second half began with good attacking play from Armagh. Fox made a break into the Banbridge 22 and prop Paul Mullen was well up in support. Stopped a metre from the line, Treanor spread the ball to the right and winger Andrew Willis crossed for Armagh’s second try and a 10-15 lead on 45 minutes.

Hooker Andrew Smyth then had to retire injured and Michael Hoey took the field.

Banbridge then attacked deep in Armagh territory but Fox grabbed an interception and made 50 metres with Crummie and Simpson up in support. A forward pass saw the scoring opportunity lost.

In an evenly contested match, Banbridge then had a spell of pressure before Armagh returned to the home 22 and a penalty for offside saw Fox stretch Armagh’s lead to 10-18 on 57 minutes.

As the match moved into the final quarter, Armagh were having the better of the second half. They were dominating territory but weren’t able to turn this into further points.

The home side always look threatening to break out of defence and did so on 73 minutes but a foot in touch prevented a try being scored.

With five minutes remaining, former Armagh under 18 prop, Robbie Mathers, making his debut for Banbridge, had a storming run and kicked ahead but Armagh covered back to avert the danger.

With two minutes remaining Banbridge were able to exploit Armagh’s defensive gaps and Morrison crossed for a try under the posts.

The conversion made it a one point match at 17-18. From the restart Armagh pinned Banbridge back in their 22 but a missed tackle saw a break out and a 75 metre run from Niall Armstrong to score a winning try under the posts to stun the visitors.

The final whistle went with Banbridge victorious 22-18 when it looked like City of Armagh were set for their first win in the SONI Premiership this season.

The Armagh coaching team were disappointed with the final result with lapses in concentration proving costly.

There were some positives from the match but errors are still costing the team and improvements will be needed before the All Ireland League kicks off in two weeks time.