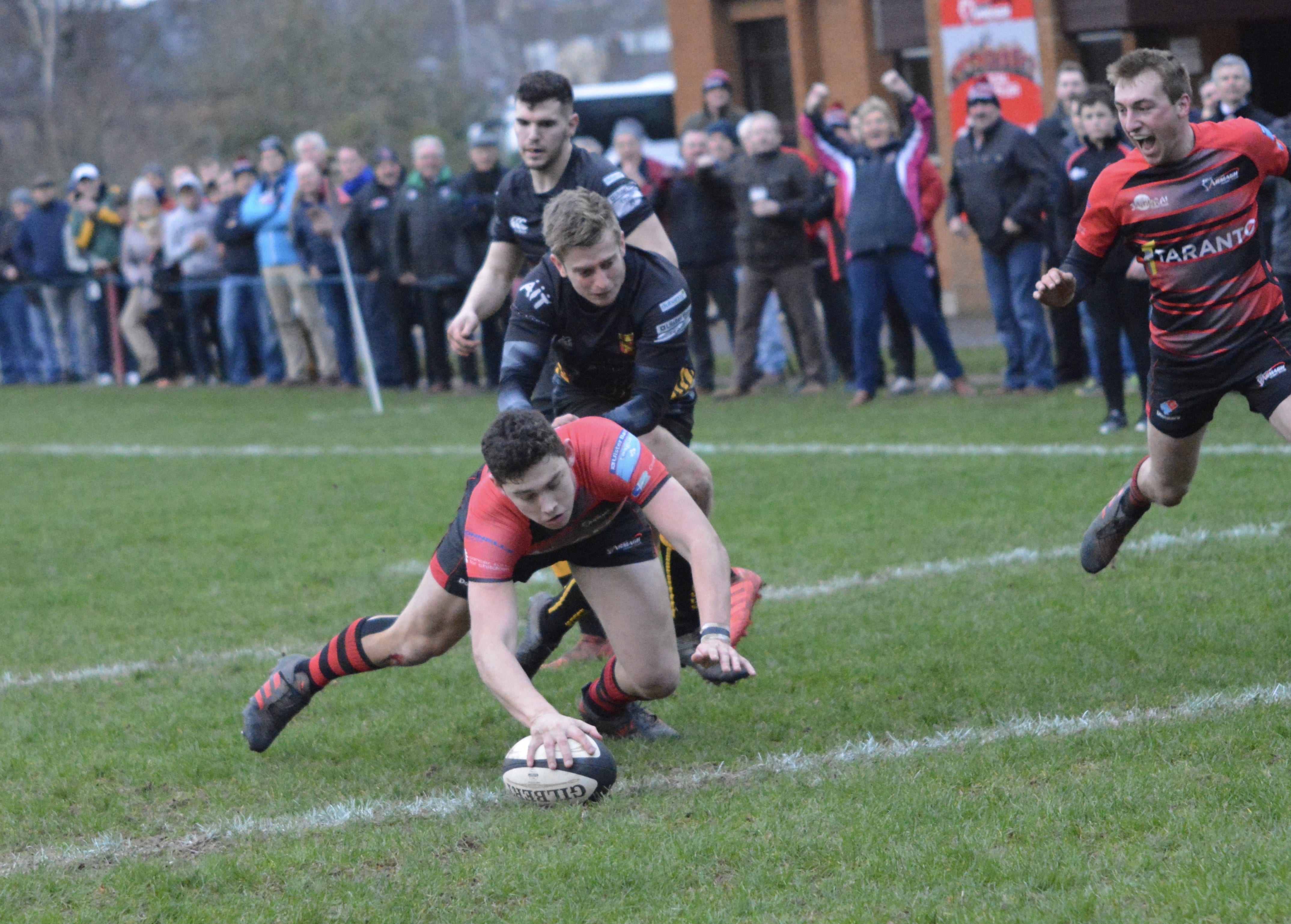 Evin Cromie scores for Armagh in the second half.

City of Armagh created history at the Palace Grounds on Saturday when they overcame Connacht champions, Buccaneers to reach the final of the Bateman Cup for the first time in the club’s history.

The Armagh side will now face Garryowen in the final on Easter Saturday after the Munster champions defeated Leinster champions, Lansdowne with a late try.

Conditions were near perfect when Buccaneers kicked off with a light breeze, playing towards the Palace. With Chris Colvin unavailable, Robert Whitten took on the captaincy role and the flanker led by example with a superb line break in the second minute. The home side looked sharp and went through multiple phases, taking play into the Buccs 22.

A knock on saw the ball turned over and full back Callum Boland made a searing break out of defence indicating that an exciting game lay ahead.

It was 10 minutes before the first scrum and Armagh won a penalty with young prop, Paul Mullen making his return from injury. Armagh then failed to find touch with their kick, Buccaneers returning it with interest.

Winger, Andrew Willis won possession from a box kick by Harry Doyle and the ball was moved swiftly to the left wing where Ryan Purvis kicked up field. The visitors were penalised for holding on and outhalf, Cormac Fox kicked a straight forward penalty from the 22 to open Armagh’s account at 3-0 after 15 minutes.

The first quarter came to a close with Armagh on the attack, with a penalty leading to a lineout on the Buccaneer’s 22. Number 8 Neil Faloon carried possession and the forwards drove towards the Buccs line. Andrew Willis then came off his wing to burst over from 5 metres for the game’s opening try. Fox converted and Armagh were ahead 10-0 after 20 minutes.

Buccaneers looked dangerous when in possession with Kieran Joyce and Hanley putting in probing kicks but a well-marshalled Armagh defence held firm.

An Armagh counter saw Whitten make a storming run down the left wing with just one defender to beat. Unfortunately the ball spilled forward in the tackle and Buccs cleared the danger. On 30 minutes, Buccaneers kicked a penalty into touch on the Armagh 22. Unfortunately the throw in was not straight but the visitors won a scrum penalty for Mikey Hanley to kick the opening points for Buccaneers, reducing arrears to 10-3.

Six minutes later, Hanley secured another 3 points when Armagh were penalised for holding on to possession after trying to run out of defence and Buccaneers were right back in contention at 10-6. With half time approaching, the Connacht side looked to have made another dangerous break in the Armagh half but the referee called a penalty for crossing and it remained 10-6 at the interval.

The second half commenced with Armagh continuing to dictate play. Prop Oisin Kiernan came off the bench and carried well leading to a penalty for a high tackle. Fox was unsuccessful with the kick and Buccaneers were let off the hook. A penalty to the home side from the restart was then wasted with touch not being found and Buccs countered well through Rory O’Connor.

A scrum penalty then saw Armagh gain territory in the Buccs 22, setting up their best attacking spell of the match. The home pack threatened to breach the try line with a series of pick and drives and finally the ball was moved out the backline where centre Evin Crummie crossed for a well-deserved try on 55 minutes. Cormac Fox converted and Armagh were now ahead 17-6.

Buccaneers then cleverly won possession from a short restart and looked to put pressure on the Armagh defensive line. Great work by the Armagh pack held up the maul and turned over possession. From the scrum on halfway, number 8, Faloon broke clear and fed the ball to the supporting Kiernan who charged towards the line. Replacement hooker, Jonny Morton was on his shoulder to take a scoring pass and dived over for a superb try.

Buccaneers were stunned by this second try in five minutes and Fox’s conversion now saw the Athlone side trailing 24-6 with 60 minutes on the clock.

Chris Cousens and Matthew Reaney were introduced from the bench as Willie Faloon freshened up his backline while Gareth McNeice slotted into the backrow. The Connacht side then showed their fighting spirit by putting a good spell of pressure on the Armagh side. Keen to spread the ball at every opportunity, Buccs looked to breach the Armagh defensive line and their patience paid off in the 65th minute when O’Connor crossed for a score wide out left. A fine conversion from Hanley made the scoreline 24-13.

Fox looked to settle any nerves Armagh might have had going into the last 10 minutes, but a long range penalty attempt from 45 metres, drifted just wide. Lock, Josh McKinley then showed his great mobility with a break on the left wing but Buccs forced him into touch.

With Buccaneers forced to run everything from deep, they conceded a penalty on halfway and Ryan Purvis kicked to within 5 metres of the corner flag. Armagh secured possession from the lineout and the pack drove for the line with Neil Faloon getting a well-deserved touch down for Armagh’s fourth try. The conversion was unsuccessful but Armagh were now leading 29-13 with 2 minutes remaining.

Buccaneers attacked for the final few minutes but it was City of Armagh who held out and secured an impressive victory, 29-13.

Two cup finals reached in successive weekends has seen a fantastic start to 2019 for City of Armagh.

The Armagh coaching team were delighted at the final whistle.

Willie Faloon commented: “Reaching the Bateman Cup final is a tremendous achievement for our club and our squad of local players deserve great credit. Garryowen will be another huge step up for our guys. We must however refocus quickly on the All Ireland League and we have a massive challenge ahead this Saturday against Banbridge.”

Club President, William Boyd echoed the coach’s statement: “Last season we had an epic match with Cork Constitution in our first ever Bateman cup match. Reaching the final this year is a terrific achievement and the whole club will be looking forward to the final in April.”

Next up for City of Armagh is another Ulster derby in the All Ireland League with Banbridge, visitors to the Palace Grounds on Saturday for a 2.30pm kick off.