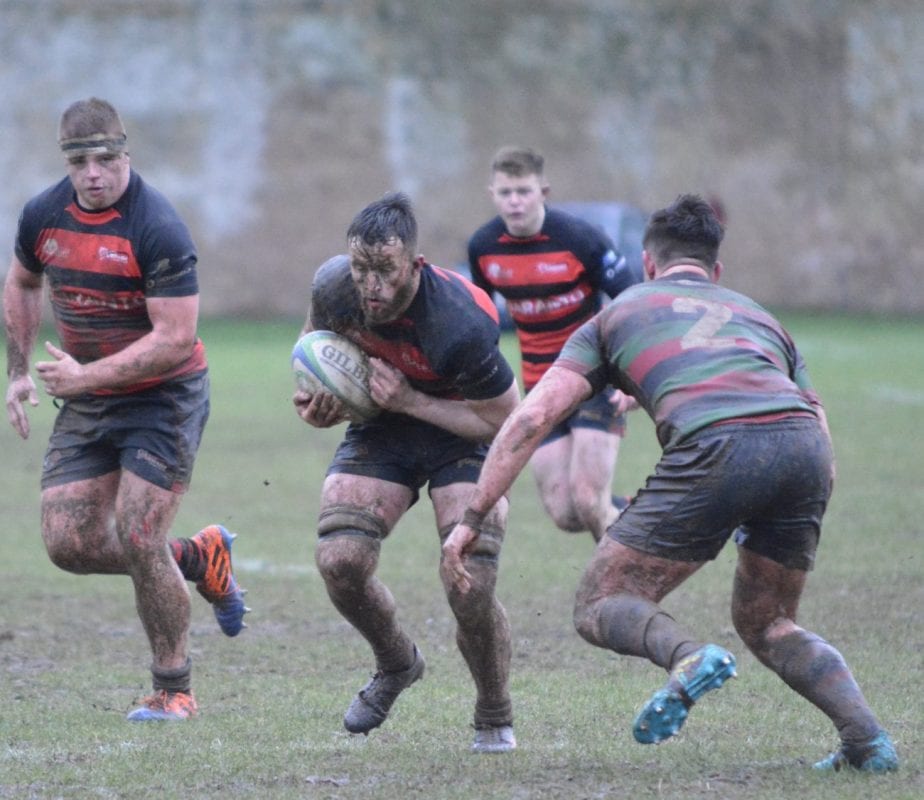 A very muddy Barry Finn makes a break late in the second half.

City of Armagh faced league leaders, Highfield at the Palace Grounds on Saturday and put in a tremendous performance that ultimately left them hugely disappointed not to have held for for victory.

The visitors tied the match at 10-10 with seven minutes remaining and then scored a try at the death to snatch four valuable league points.

In atrocious weather conditions, the visitors from Cork kicked off with few spectators straying from the sanctuary of the clubhouse.

An early penalty to Armagh was kicked to touch but Highfield’s maul defence was solid and the visitors then won a turnover in midfield.

Highfield were playing into the wind for the first period and attempted to stretch Armagh out wide. It was Armagh who won the first scrum penalty of the game but a second turnover saw Highfield make their first foray into Armagh territory.

Weather conditions were going to cause havoc with line-outs all day but Armagh secured possession and made a safe exit.

A loose ball was hacked up the pitch by Armagh’s Andrew Willis and the Highfield defender was penalised for holding on. The resulting lineout was then lost and a penalty to Highfield saw them clear the danger.

A crooked lineout then gave the initiative back to the home side who had been on the front foot as the first quarter came to an end.

Cormac Fox used the wind to peg Highfield back in their half and Armagh stole a Highfield lineout. Inevitably the conditions resulted in handling errors and both side tested each other with a spell of kicking.

With 25 minutes on the clock, the visitors’ full-back failed to secure the ball and Armagh had a scrum on the Highfield 22. Number 8 Neil Faloon broke from the back of the scrum, escaping the clutches of the Highfield back row and made a storming run right up to the tryline. Stopped just inches short, Armagh recycled as Highfield looked to desperately defend their line.

The visitors conceded a penalty in front of their posts and buoyed by their forward’s efforts, Armagh elected for a scrum. Highfield however are top of the table for a reason and their well organised defence held firm, preventing Armagh from opening the scoring.

The Cork side brought play outside their 22 but Armagh regained possession and some brilliant driving by the pack saw them make 20 metres and it was Neil Faloon again who popped a scoring pass to prop Pete Lamb to cross to the right of the posts. Fox’s conversion gave City of Armagh a deserved 7-0l lead with six minutes of the half remaining.

The home side were close to a second try a minute later when Gerard Treanor made a blind side break and chipped ahead. Highfield touched down for a 22 drop-out and the whistle for halftime blew with the home side leading 7-0.

Highfield might have been satisfied to turn around just one score down after playing into the elements but it was a confident Armagh side that restarted the second half. Thankfully the heavy rain had eased off providing some comfort to the spectators.

Armagh won a turnover in the first minute and full-back Timmy McNeice made a great run from halfway taking play into the Highfield 22. The Armagh pack then went through several phases as Highfield were forced on to the back foot.

The Armagh back row were having a tremendous game with Barry Finn almost breaking through some desperate Highfield defence. Shea O’Brien was forced into touch and then centre, Chris Colvin made valuable yards as the home side continued in the ascendancy.

On 52 minutes, Highfield were penalised for not rolling away and Fox put over a tricky kick into the wind to give Armagh a 10-0 lead.

The Munster side looked to respond and a penalty was kicked down the line. The visitors however were prevented from getting any momentum into their lineout maul. The ball was moved wide and full-back Sam Burns entered the line at speed to cross over for a converted try on 60 minutes.

With the scoreline, Armagh 10 Highfield 7, the final quarter was going to be tense for both sets of supporters.

On 65 minutes, Armagh were awarded a penalty 35 metres out and elected to kick into the corner. Highfield made a crucial lineout steal and cleared the danger to halfway. Armagh continued to press but a knock on saw possession turned over.

With 73 minutes on the clock, Highfield’s pressure paid off when they were awarded a penalty in front of the Armagh posts. Suddenly the match was level at 10-10 with six minutes to play and ironically the heavens opened again.

As the match came to a close, Armagh had possession on the halfway line when the ball was coughed up for Sam Burns to seize and the full back sprinted 50 metres to score the match winning try. The conversion was unsuccessful and the home side failed to get out of their half in the final two minutes.

The full time whistle blew and Highfield had come out on top 10-15.

A losing bonus point was scant reward for a City of Armagh team that had dominated the match for 70 minutes.

The coaching team were frustrated with the late score being conceded, as had happened in the reverse fixture down in Cork.

Willie Faloon commented: “We were delighted today with the effort from the team in a really physical match. We controlled possession and territory for long periods, but credit to Highfield, they are a very well organised side and difficult to break down. They capitalised on our errors but we can take plenty of positives from the match today.”

Next up for City of Armagh is another hugely difficult fixture, away to Dublin side, Old Wesley, currently in second place in the league table. The Leinster side had a very one sided victory at the Palace Grounds earlier in the season against an off colour Armagh side who will be looking to set the record straight in Dublin.

Gareth Megaw celebrated his birthday in style on Saturday with two tries in Armagh Thirds’ victory over Instonians Seconds in the quarter final of the Crawford Cup at Shaws Bridge.

In atrocious conditions with heavy rain and a strong wind for most of the match it was Armagh that controlled the game denying Instonians any scoring opportunities.

Referee John Adams judged that the match could go ahead on a pitch that, although waterlogged, was firm underneath.

Captain, Andrew Brady was unable to play due to a foot injury and Sam Shepherd was called in as a late replacement while Brady provided encouragement from the sidelines with coach David Eakin and a good contingent of Armagh supporters.

It took both sides some time to settle into the conditions but on 15 minutes Armagh won a scrum against the head and Megaw was quick to gather the ball and surge over under the posts leaving the simplest of conversions for Andrew Knipe and 7-0. Conor Simms was sidelined with a head injury and Ross Finlay came on as substitute.

The Instonians pack was strong and forced Armagh to concede ground and penalties but they were unable to convert this supremacy into scoring opportunities. The Armagh defence held firm and cleared their try line on a number of occasions.

Armagh’s second try came as the pack worked the ball forward for second row Con Oliver to touch down right of the posts for 12-0.

Armagh’s third came just a minute later when they recovered the ball from the restart. With Instonians drawn in to the centre of the pitch scrum-half, Trevor Girvan, released the ball to the backs through Winder, Knipe and Allen to Dan Reynolds on the right wing. Dan was able to run in unopposed for 17-0.

A fourth try, this time by Neil Lutton and the conversion by Knipe gave Armagh a healthy 24-0 half time lead.

The second half was a dour affair with Instonians chasing the game and Armagh content to consign the opposition to their own half and of course it was birthday boy Megaw who rounded off a man of the match performance with a try under the posts.

The conversion by Knipe rounded off a great team performance where every player from 1 to 15 and the three subs played excellent rugby in awful conditions.

Based on this performance City of Armagh Thirds can go into the Crawford Cup semi-finals on March 21 brimming with confidence.

In the meantime the same Instonians side will be the opposition next week in Provincial League 2 at the Palace Grounds.