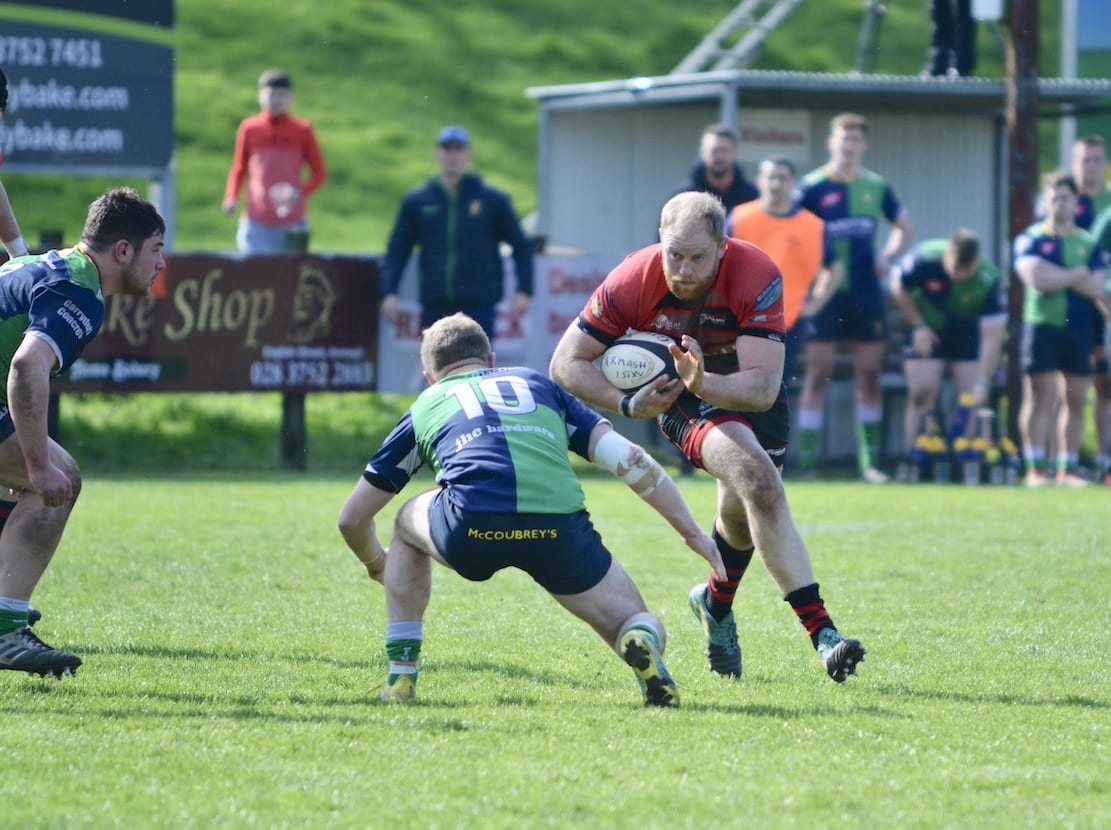 In glorious sunny conditions, visitors Ballynahinch kicked off at the Palace Grounds looking to cement their position as league title contenders.

The Co Down side put in a clinical display to defeat the hosts, and with Old Wesley slipping to defeat in Dublin, the Hinch climbed to the top of the table and look odds on favourites to win promotion to Division 1A next season.

For City of Armagh, it was a second defeat in a row and the team that was in second place at Christmas, have now slumped to eighth position in an ultra competitive league.

On a brighter note, Banbridge’s defeat of Buccaneers meant safety in Division 1B for both the Ulster sides and condemned the Athlone club to a relegation playoff.

The game itself started positively for the Orchard County side and outhalf, Cormac Fox opened the scoring on six minutes with a straightforward penalty in front of the posts.

Former Armagh player Richard Reaney then replied with a 40 metre effort on 12 minutes to tie the scoreline, 3-3.

On 16 minutes Ballynahinch scored their first try following a scrum on halfway. Captain Aaron Cairns burst clear on the left wing and chipped ahead, only to receive a lucky bounce of the ball that deceived the
Armagh defender, to touch down for an unconverted try and 3-8.

Two minutes later, Ballynahinch turned over Armagh possession and Reaney kicked another penalty to edge the visitors further ahead 3-11.

Into the second quarter and Armagh looked to get a foothold in Hinch territory. A scrum penalty to the visitors was then reversed for dissent and Fox kicked the points to keep Armagh in touch at 6-11.

Approaching the half hour mark, Reaney instigated a break from halfway and brought play right up to the Armagh line. Slick passing saw Zack McCall unmarked on the wing and the hooker crossed for an unconverted try to give the visitors a ten point lead at 6-16.

An interception following the restart saw the Hinch back on the front foot and a line break almost led to try number three. Armagh turned over possession to relieve the pressure and number eight Neil Faloon then
made a trademark 40 metre burst into the Hinch half.

A penalty for a high tackle gave the home side the chance to reduce arrears and Fox made no mistake to make the score 9-16 as the whistle went for the interval.

The early stages of the second half had City of Armagh on the attack but a good attacking opportunity was wasted when they failed to secure possession at a lineout in the Hinch 22.

The visitors conceded another penalty soon after and Armagh again looked for an attacking lineout opportunity. This time Hinch allowed Armagh to secure possession but didn’t engage at the maul and were
awarded a scrum and another opportunity was lost for the home side.

On 52 minutes Ballynahinch attacked just inside the Armagh half and were awarded a penalty for a high tackle. Flanker James Hanna was dispatched to the sinbin and Richard Reaney converted a superb kick from 49 metres to extend the Hinch lead to 9-19.

With captain Chris Colvin missing through injury, Armagh’s backline lacked a cutting edge and the HInch defence was well organised. As the third quarter came to a close, Armagh looked to break out of defence but the referee brought play back to award them a penalty and sent Hinch’s Bradley Luney to the sinbin.

The home side then did get some momentum in their game and a good catch and drive from a lineout had Hinch under pressure with Armagh’s best spell of the game. James Morton then had to leave the field with a knee injury after a lengthy delay and from the next scrum Armagh had the Hinch pack in trouble and the referee awarded a penalty try. The match was now right back in the balance at 16-19.

From the restart, Armagh’s full back Tim McNeice made a break but the ball was turned over and Ballynahinch counter attacked. Another chip and chase paid off when Rhys O’Donnell crossed for an unconverted try just a minute after the Armagh score.

Hinch now led 16-24 and Armagh had 15 minutes remaining to get a losing bonus point or better out of the match.

Crucially Armagh were awarded a penalty inside Hinch territory but their kick to touch went dead, a costly mistake.

With 10 minutes remaining, the home side made another error when winger Willis was penalised on the halfway line. Reaney stepped up once again and kicked a 50 metre penalty to sink Armagh’s hopes with the score now 16-27.

A second Hinch player was yellow carded for a no arms tackle with five minutes remaining and the home side reduced
arrears to 19-27, Chris Cousens successful with the penalty kick.

Hinch overcooked the restart kick and Armagh won a penalty from the resulting scrum on halfway.

Armagh’s error count continued when they messed up the resulting line-out and Hinch cleared the danger.

With two minutes remaining Armagh won a scrum against the head but the backs turned over possession to sum up the home side’s struggles all afternoon.

The final whistle went with Ballynahinch winning 19-27, with the home side missing out on a losing bonus point.

The Armagh coaching team were disappointed with the side’s performance on the day.

Assistant coach Chris Parker commented: “Ballynahinch put in a very clinical display today, taking their opportunities well and their kicking game kept us on the back foot most of the match. Our guys made too many errors which was disappointing, but we will learn from today’s experience.”

Next up for City of Armagh this Saturday is their final fixture in this season’s AIL, an away trip to Dublin side Old Wesley.