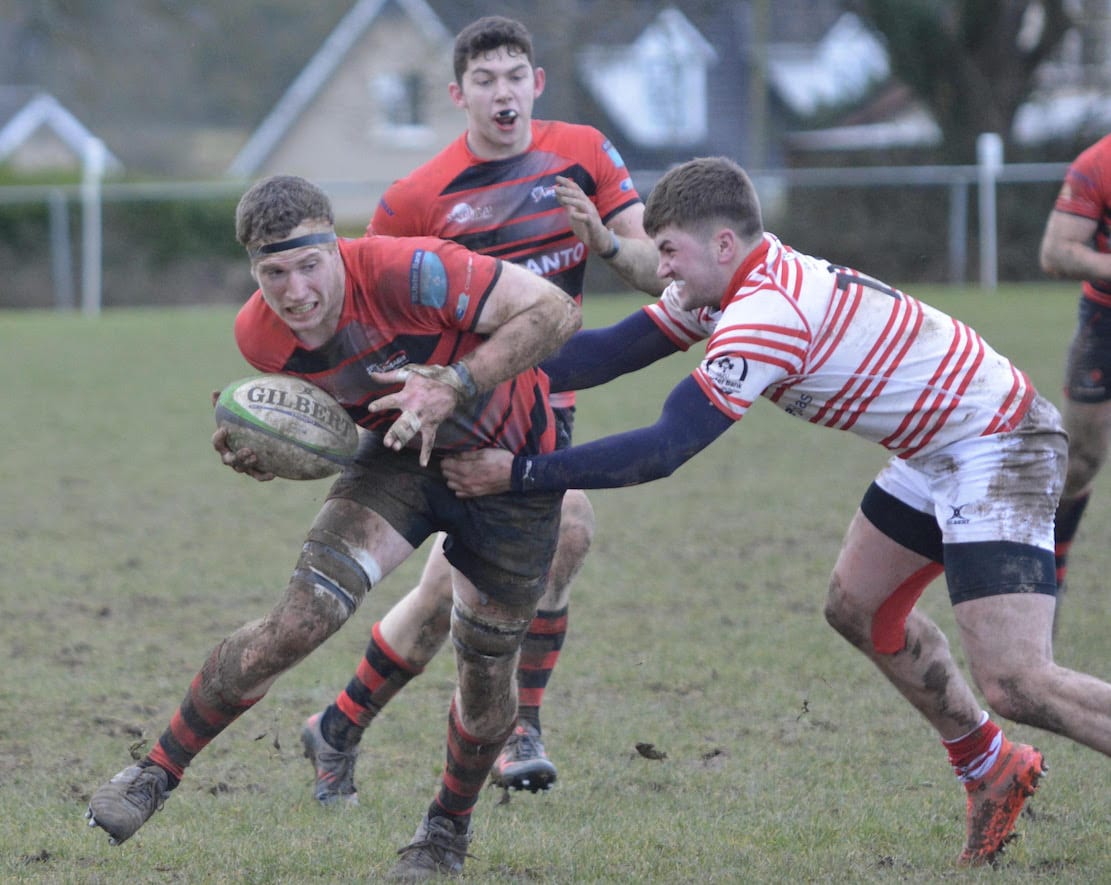 In yet another huge fixture for the club, City of Armagh travelled to Cork on Saturday for the semi-final playoff for promotion to Division 1B of the All Ireland League.

The Armagh side were very much underdogs as Highfield had defeated champions Malone to finish runners-up in the league and had twice beaten the orchard county men both home and away this season.

In dry, sunny conditions, Armagh chose to play with the wind at their backs in the first half as Highfield had the advantage of the playing down the hill.

The home side started well and early pressure led to a penalty opportunity that was converted by Paddy O’Toole to open Highfield’s account.

Armagh regained possession from the restart and went about constructing phases to try and force an opening in the well organised Highfield defence. An indiscretion at the breakdown by Highfield was penalised and allowed outhalf Cormac Fox the opportunity to tie the scores and he made no mistake off the tee.

Armagh were managing the conditions well and a huge clearance by full-back McNiece saw Highfield forced back into their 22.

A crooked throw from the resulting lineout gave Armagh an excellent opportunity and following a number of quick phases of possession it was winger Andrew Willis who stood up his opposite number to dive in at the right hand corner for a superb individual finish. Fox was just off target with the touchline conversion and Armagh led 3-5 after 7 minutes.

Highfield then made a couple of breaks and the Armagh defence had to work hard to defend their line with Hooks and Whitten in the back row getting through a mountain of work. The pressure told on 22 minutes as O’Toole struck another penalty to edge Highfield ahead 6-5.

Five minutes later, the visitors struck back when strong carries by Chris Colvin and Neil Faloon brought play into the Highfield 22.

The ball was then moved to Timmy McNiece who broke the defensive line and rounded the full back to score under the posts. Fox converted and Armagh now led 15-6 with 27 minutes played.

The Armagh front row of Carlisle, Smyth and Mullen were getting across the gain line with each carry putting Armagh on the front foot.

Ten minutes before the break, Highfield were penalised at a ruck and Fox made no mistake to stretch Armagh’s lead to 18-6.

The visitors pressed for the remaining minutes of the half and the whistle went for the interval with the scoreline remaining 6-18 in favour of Armagh.

The second half saw Armagh playing into the strong wind and carries from McKinley and his second row partner Starrett saw Armagh gave Armagh the early initiative.

On 55 minutes, flanker Robert Whitten burst through the defence into the 22 and the Highfield tackler failed to roll away. The referee awarded Armagh a penalty that Fox struck between the uprights for a 6-21 advantage.

The next ten minutes saw Armagh control possession in the Highfield half but they struggled to break down the resolute home defence.

A turn over in midfield by James Morton saw the ball moved through the hands with McKinley making inroads before Hooks made a burst up the middle of the park.

Again the tackler failed to release resulting in another penalty to Armagh and a yellow card for the offending Highfield player. Fox struck the penalty between the posts and Armagh led 6-24 with fifteen minutes left to play.

Highfield, down to fourteen men, battled back and scored a well worked try that was quickly converted to bring the score to 13-24 in the visitor’s favour with 69 minutes played.

The Cork side then threw everything at Armagh in the final ten minutes looking for a further score. With five minutes remaining, the referee awarded a penalty to Armagh and the reliable boot of nineteen year old Fox increased Armagh’s lead to 13-27.

The final whistle went with City of Armagh deserved winners, much to the joy of their many loyal supporters who had travelled down to Cork.

News soon came through of Nenagh Ormond’s surprise victory over UL Bohemians in the other semi-final, resulting in the playoff final now taking place at the Palace Grounds in Armagh this weekend.

The Armagh coaching team were delighted with this victory which they described as the team’s best performance of the season.

“Everyone stepped up to the mark with forwards and backs giving everything on the pitch”, commented coach Willie Faloon.

“This season continues to be a fantastic journey for our club and our First XV. Nenagh Ormond will present a massive challenge but with our terrific home support, we will rise to the occasion.”

Supporters should note that the Play-off Final this Saturday will have a 1.30pm kick-off and full details of the pre-match lunch will be on the club’s social media.

Armagh seconds became conference league 1 champions last Thursday night when they travelled to Ballyclare to play their first fifteen in a game which had been cancelled three times previously due to inclement weather conditions.

From the off, Armagh’s backs looked sharp with the dry firm conditions suiting a fast running game.

An early attack initiated by the forwards led to Luke Crozier being tackled close to the corner flag.

On 7 minutes, sharp passing out wide led to Shane McKeever touching down in the opposite corner for Harry Boyd to add a good touchline conversion.

On 16 minutes more driving play from Gareth McNeice and Michael Hoey led to a crash ball from Crozier who upon going to ground, off loaded to Captain Stephen Morton to finish off from 10 metres out. With Boyd’s conversion, Armagh were 14-0 ahead.

Some Armagh indiscipline led to Ballyclare replying with a penalty and from a 5 metre lineout an unconverted try to close the gap to 14-8.

Willie Martin, Josh Kennedy and Connor Simms were keeping the robust Ballyclare forwards busy with William Holden making several darts to keep the home defence on their toes. On 25 minutes quick hands from Kennedy and Morton led to McKeever sniping over in the same corner as his previous score for another converted try, 21-8.

Again Ballyclare closed the gap due to some weak Armagh tackling with a converted try at the posts which left the score 24-15 to Armagh.

On the restart Ballyclare took play into the Armagh 22 with the ball kicked through and touched down by Crozier. Some clever thinking by Boyd saw him take a quick tap on the 22, pass to Pau Gimeno who took off up the pitch outpacing the Ballyclare defence and unselfishly passing to the supporting McKeever on the line for his hatrick try.

Boyd converted again to stretch the lead to 28-15 at halftime. With the backline in full flow, Boyd made a midfield break to set Holden on his way from 40 metres out outpacing several defenders to touch down at the posts, 35-15.

The scrums had been competitive all evening with Philip Matthews, Michael Hoey and Lutton providing the required solidity against an experienced Ballyclare eight. Owen O’Hagan joined the fray returning from a lengthy period of injury along with Trevor Girvan replacing Holden.

With Pau and Matthew Reaney combining well in the centre, Reaney broke though an attempted tackle on the edge of the 22 to touch down at the posts for a good individual try. Further tries by Karlsen and Crozier brought the score to 54-15 at the final whistle.

This was a very good performance from the seconds to finish top of this league with only one loss and a draw from 12 games which was just reward for some scintillating rugby this season.

The seconds have with 2 games left to play with the team in with a chance of winning 2nd xv league to add to their conference league title.

This is the first time Armagh has won this title at this age group. The result in the final v Clogher Valley on Saturday 21 April was 34-5 in Armagh’s favour with Armagh scoring six tries.

The final was a close affair in the first half with Armagh having to defend for long periods in the opening period however when possession was secured and after several phases the ball was moved wide for James Campbell to slice through the defence after 16mins for the opening score.

In the second half Armagh looked more assured and took control of the game. As the coaches rolled on the subs to Armagh scored five tries in regular intervals. Credit to Clogher to made Armagh work for every score.