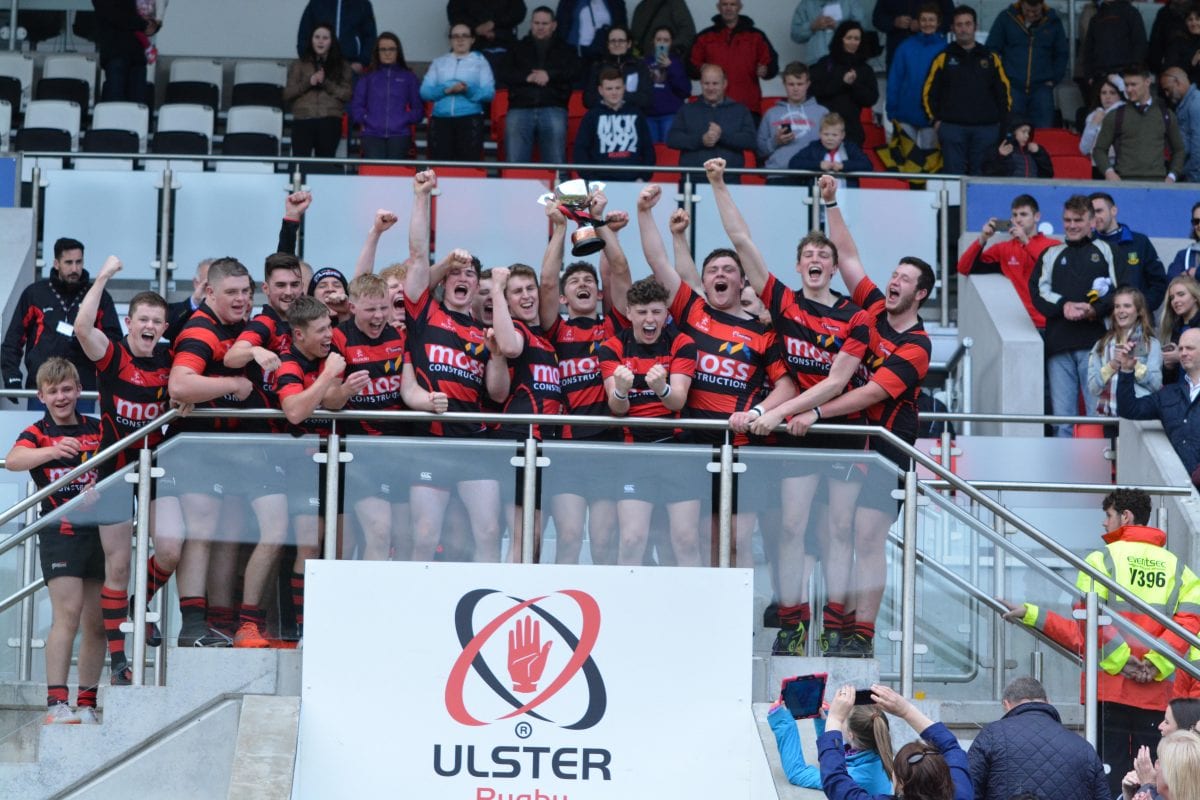 City of Armagh U18s have added the Ulster Carpets Youth Cup to the Palace Grounds trophy cabinet, having already collected the League and Nutty Krust tournament titles this season.

The Armagh lads put in a clinical display at Kingspan Stadium on Saturday, running in eight tries to comfortably see off a spirited Letterkenny challenge to emerge as comprehensive winners 53- 7.

The wet weather forecast had failed to materialise and Letterkenny kicked off in near perfect conditions, playing into a stiff breeze.

Immediately Armagh secured possession and spread the ball quickly along their back-line to set out their tactics for the match ahead.

Wingers Savage and Magowan were set free in the wide channels and created chances, along with full-back O’Brien every time they received the ball.

Armagh got the opening score of the game after six minutes when a well-worked line-out switched play from touchline to touchline for winger Michael Savage to get over in the left corner.

Out-half Cormac Fox struck his conversion attempt well but it just tailed to the left.

Armagh got over for another try six minutes later when full back Shea O’Brien was released following some swift hands across the Armagh backline.

Fox’s conversion opened up a 12-0 lead. Fox further extended the Armagh lead on 18 minutes with a well struck penalty from the 10 metre line, punishing the Letterkenny defence for an indiscretion at the breakdown.

Letterkenny received their first yellow card of the day putting them further under pressure.

Savage skipped in for his second try on 21 minutes, finishing off after Fox released the winger with a perfectly timed skipped pass, The conversion from Fox stretched Armagh’s lead to 22-0.

On 24 minutes, relentless pressure from the Palace Ground side saw number 8 Barry Finn storm through, fending off two attempted tackles to touch down for his side’s fourth try.

On this occasion Fox was unable to land the conversion and the scoreboard moved to 27-0.

As half time approached, Letterkenny number 8 Peter Scott made good headway into the Armagh ’22’. Letterkenny forced a penalty then kicked for the corner, before Scott peeled off the lineout maul and charged over to touch down.

He then picked himself up and knocked over the conversion to narrow the deficit to 22-7. The huge Letterkenny pack then put further pressure on Armagh looking for their second try of the afternoon but Ryan Morton stole a crucial line-out near the Armagh line to allow Fox to clear the danger.

The half-time whistle went with Armagh leading by 27-7, having put on a stunning display of attacking rugby in the first period.

The first score of the second half came on 44 minutes and crucially it was from Armagh again as O’Brien made the initial break through the midfield before swinging his pass wide to Savage who nipped in to complete his hat-trick.

Four minutes later Savage found himself in open space on the left wing once again and he made no mistake, powering over for his fourth and Armagh’s sixth try of the day. Fox’s sideline conversion opened a commanding 39-7 lead.

Prop Paul Mullan then got in on the act on 55 minutes, as he took the offload and crashed over, following good work by winger Adam Magowan, with Fox adding the extra two points.

As the match entered the closing stages, Armagh continued to attack and their enterprise was rewarded on the final play when scrum-half Nathan Rogers darted over for Armagh’s eighth try in what was a stunning team performance.

The final score was 53-7 and credit to Letterkenny for never giving up and showing great spirit against a side who have completed their season undefeated.

Great credit must be given to the Armagh coaching team of Antoine Finn and Gervaise O’Brien, assisted by club youth convenor Richard Black.

The coaches were delighted to add the Ulster Carpets U18 Cup to the League and Nutty Krust titles and the exhibition of fast, expansive rugby was a great spectacle for the neutral supporter at the Kingspan Stadium.