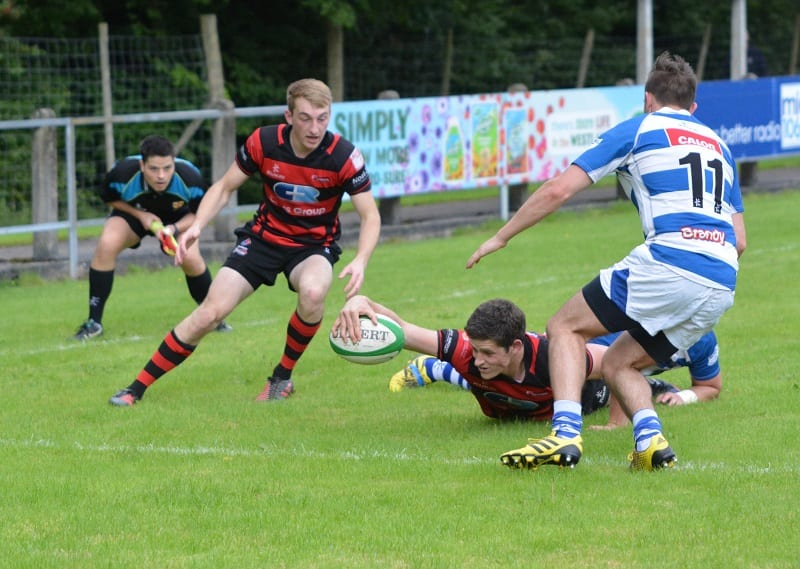 Armagh travelled to Stevenson Park on Saturday afternoon to play Dungannon in the first of three meetings scheduled for these teams over the next six weeks.

They are set to meet in the SONI Ulster Premiership, the Ulster Bank All-Ireland league and also in the First Trust Senior Cup. No doubt the teams will be familiar with each other’s faults and foibles by the end of October!

The last occasion the two teams met was in April, when they played the last fixture of the 2015-16 season.

That game ended with Armagh coming out winners 22-30 in a hard fought struggle. With this in mind and the scheduled future fixtures, both sides were keen to claim the points in the SONI League.

A slight breeze favoured Dungannon from the kick-off and they were seen to put a lot of early pressure on Armagh. Indeed Armagh were pinned inside their own half for the first fifteen minutes play.

Dungannon’s kicker, Jake Finlay, opened the scoring when Armagh were penalised for failing to release following a tackle. For a short period Dungannon continued to dominate play, but as the game progressed the visiting side seemed to ‘find their feet’ and started to show some of the form they exhibited last week in Ballymena.

Ryan Purvis opened the Armagh scoring when he landed a penalty after twenty minutes play.

Ryan Purvis landed the conversion to bring the score to 3-10. Some poor mid-field defence then let the home team score a try under the Armagh posts on the stroke of forty minutes and the conversion levelled the score,10-10 at half-time.

As the second half got under way, some dark threatening clouds were seen to drift over Stevenson Park, but thankfully the rain failed to materialise.

Armagh were penalised for a dangerous tackle and Tianua Poto’s kick put the home side ahead 13-10. From this point Armagh appeared to take control of the game. They were especially seen to dominate the scrums and it was obvious that Armagh’s off season training had benefited their technique.

Armagh’s full-back, Timmy McNiece, scored a beautiful try in the right corner ten minutes after the break and Ryan Purvis landed a difficult conversion into the breeze. Purvis went on to intercept a loose Dungannon pass inside the Armagh half to score under the posts.

Further tries from Jonny Pollock and Man of The Match, Chris Colvin, stretched the score to 13-35.

Deep into injury time Dungannon’s Seamus Mallon scored under the Armagh posts and the resultant conversion closed the afternoon off with the final score 20-35.

The Armagh coaching team were understandably pleased with the result but were emphatic that with the All-Ireland League games kicking off next Saturday when they play Bective Rangers in Dublin, this result must be kept in context.