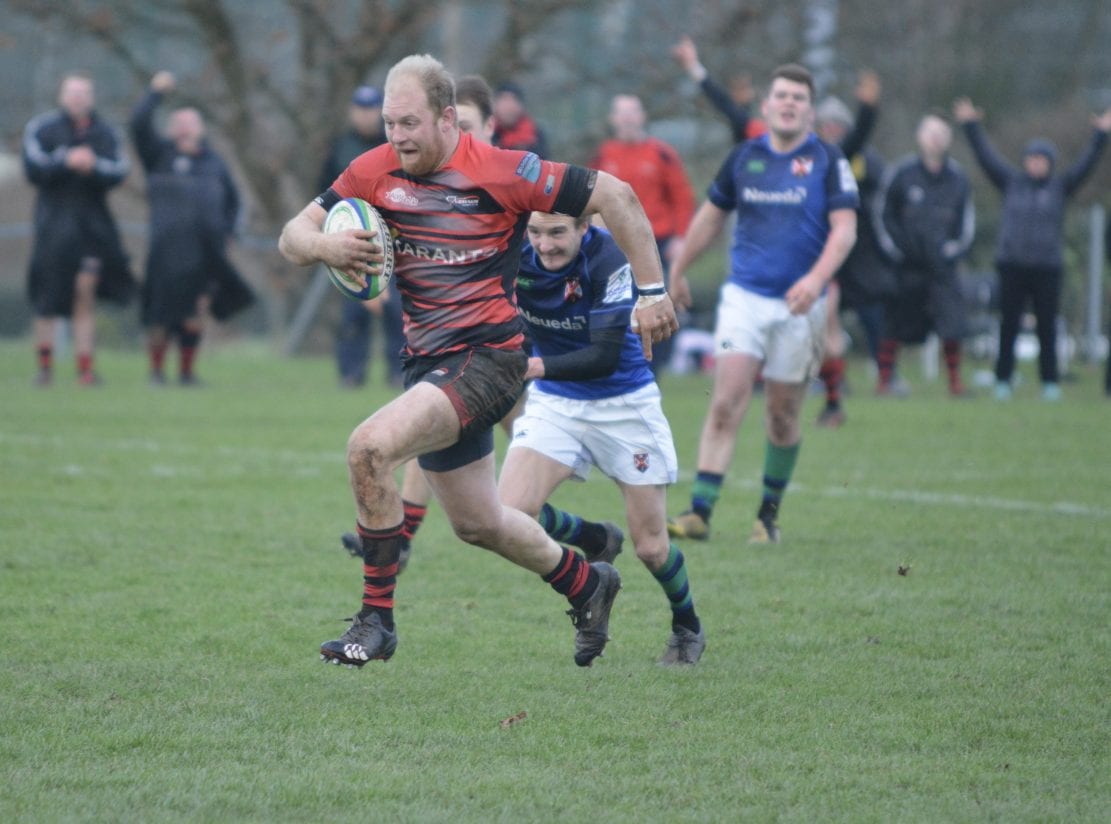 City of Armagh earned a hard-fought victory at The Dub on Saturday when they defeated hosts, Queen’s University in a low scoring match that was dominated by a gale force wind.

Queens elected to play into the wind and kicked off, winning early possession which they kept for the first 7 minutes of the match. Two penalties were tapped in quick succession as the students looked for an early score. Following repeated forward carries, a knock on let Armagh relieve the pressure and the visitors made their first foray into Queens territory.

From an attacking scrum Harry Doyle made a break into the 22 and following a number of phases, centre John Faloon was halted just short of the try line. Queens managed to turn over possession and cleared the danger.

Scoreless after 30 minutes, Armagh were struggling to get their hands on the ball to mount any serious threat to the well-organised Queen’s defence. Their best chances came when captain, Chris Colvin instigated a break for Timmy NcNeice on the left wing and number 8 Neil Faloon had a charge close to the Queen’s line.

A penalty for Armagh in front of the Queen’s posts was reversed summing up the frustration of the visitors in failing to get on the scoreboard. Just before the break, Armagh second row Robert Whitten made a break but his final pass didn’t go to hand and the halftime whistle went on a scoreless first half with Queen’s determined defence taking the plaudits.

The sizeable Armagh travelling support feared Queens would make much better use of the elements in the second half and it was no surprise when Ritchie McMaster opened the student’s account on 53 minutes with a well-taken penalty for a 3 nil lead.

Remarkably the second half was to see a reverse of the first where Armagh, now playing into the wind, dominated possession and kept the ball out of Queen’s hands. Johnny Pollock, Jonathan Morton and Evin Crummie joined the fray for Armagh and young centre Crummie made a break which nearly led to a try.

On 63 minutes the game took a key twist when great driving play by the Armagh forwards saw Neil Faloon burst through a gap to score under the posts. Winger Ryan Purvis kicked the tricky conversion and Armagh were ahead 3-7.

It was Armagh who returned to the attack and some great controlled driving made the hard yards back up the pitch into Queen’s territory. On 70 minutes the home forwards were forced to concede a penalty just outside their 22 and Purvis stepped up again to convert the kick in difficult conditions.

City of Armagh now led 3-10 with ten minutes of the contest remaining. The visitors dominated the final period and kept Queens pinned in their 22 with backs and forwards combining to stretch the Queen’s defence looking for a further score. Queens held firm and at the final whistle had a secured a losing bonus point. Following their tremendous second half performance, Armagh took four points to maintain their position in fourth place in Division 2A.

The Armagh coaching team were delighted at the final whistle to have secures a hard-fought victory in difficult conditions.

“Queens adapted much better to the conditions in the first half and we failed to use our possession wisely. The second half was a contrast and the whole team deserves credit for getting their tactics spot on,” commented Willie Faloon.

This Saturday, action in the All Ireland League continues and City of Armagh face a huge test when Belfast side, Malone travel to the Palace Grounds looking to maintain their position at the top of Division 2A.