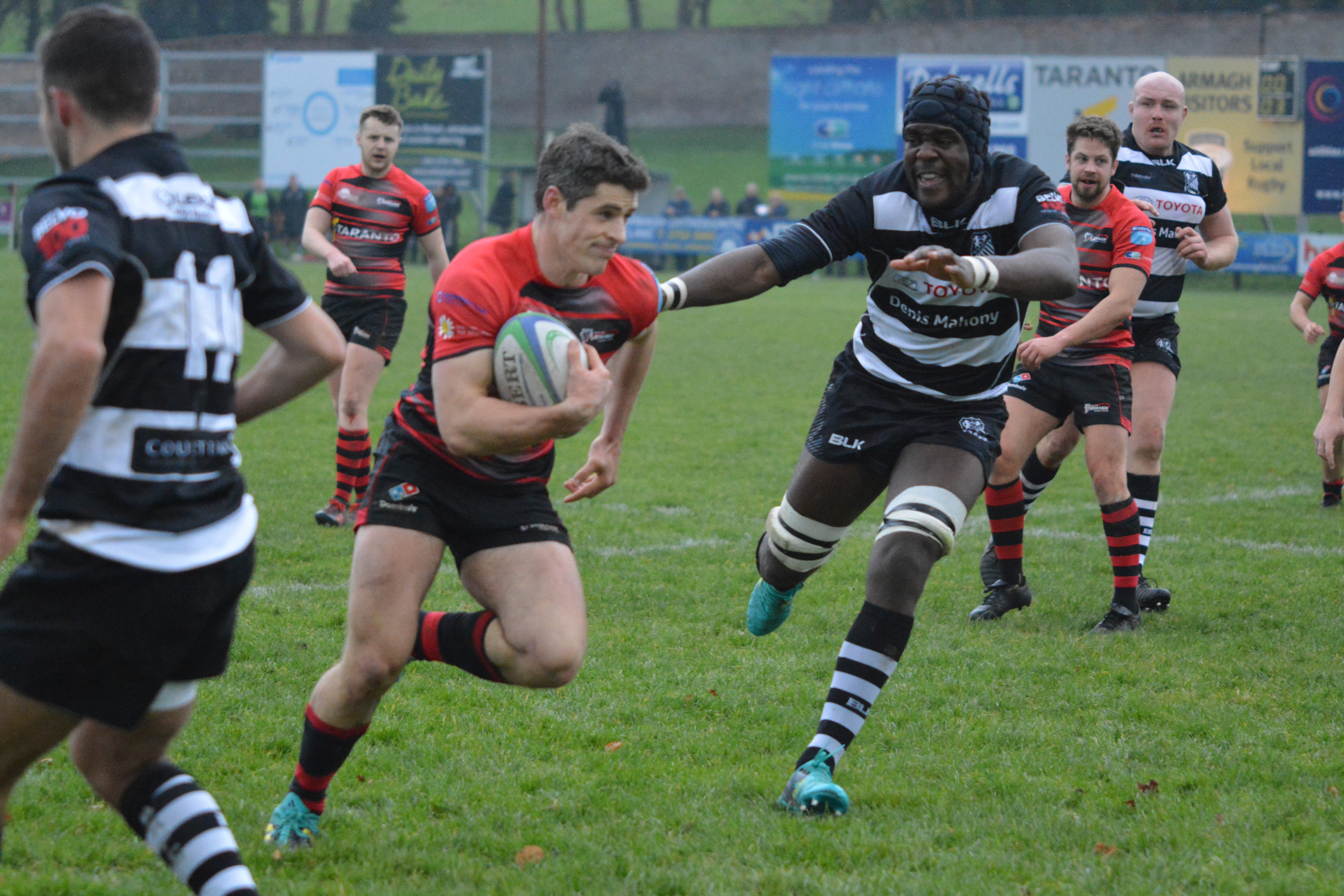 On a murky afternoon at the Palace Grounds, it was the hosts, City of Armagh who came out on top of a closely fought encounter with Dublin side Old Belvedere, outscoring their rivals by two tries to zero, to edge home 15-9 and secure four valuable league points in Division 1B.

Old Belvedere kicked off and looked to impose themselves in the early stages. Dominating early possession, the Leinster side lost their first three lineouts as Armagh earned valuable turnovers.

The deadlock was broken on 15 minutes when the referee awarded the visitors a scrum penalty and outhalf, Steve Crosbie slotted the kick for a 0-3 lead.

Armagh were struggling in the early stages to gain territory as a well marshalled Belvedere defence quickly closed down any attacking opportunities.

At the end of the first quarter winger Andrew Willis latched on to a cross-field kick from Cormac Fox but lacked support and conceded a penalty for the visitors to clear. The Belvedere backline looked the sharper of the two and winger Jack Keating, as the league’s top try scorer, posed a regular threat.

Just before the half hour mark, Armagh had their best attacking phase of the match with forwards and backs linking for Timmy McNeice to almost break through.

Pressure in the Belvedere 22 led to a penalty being conceded and Cormac Fox levelled the match at 3-3.

Five minutes before the break, Crosbie made a fine break from halfway as gap suddenly appeared in the Armagh defence.

A try looked certain but the referee penalised the attacker for a double movement and the home side breathed a sigh of relief as they cleared their line.

It was the home side then who attacked from deep when centre Chris Colvin broke clear from his 22.

Fox then kicked for territory and Belvedere won a penalty at the lineout and a tense first half came to a close with nothing separating the sides, tied at 3-3.

City of Armagh kicked off the second period and won the restart, immediately going on the offensive. A couple of handling errors by Belvo gave Armagh good attacking scrum positions and the forwards took play deep into Belvedere territory.

Second row Peter Starrett made good ground with Doyle quickly recycling the ball for Fox to give a scoring pass to McNeice to score on 45 minutes.

The conversion was unsuccessful with Armagh now ahead 8-3.

From the restart flanker James Hanna burst through a gap and made 40 metres. Possession however was kicked away and Belvedere’s Riordan kicked down the touchline superbly to Armagh’s 22.

The visitors secured possession and forced the home side to concede a penalty on 50 minutes which Crosbie converted to narrow the gap to 8-6.

Armagh then dominated the match for the next 20 minutes and Old Belvedere were pinned back in their half. Wave after wave of Armagh attacks were stoutly defended by the black and white of Belvedere. Eventually the pressure was to pay off and on 72 minutes a penalty for side entry was kicked into the corner.

The lineout was secured and the Armagh pack drove over in the corner with lock, Starrett getting the crucial touchdown. Cormac fox kicked a superb conversion from the touchline and Armagh had some breathing space at 15-6.

Old Belvedere looked to get something from the match and a losing bonus point was secured when Crosbie kicked his third penalty on 76 minutes.

At 15-9, Armagh eventually closed the match out and claimed valuable points to maintain their fourth place position in Division 1B.

The Armagh coaching team were delighted to secure a home win against the odds.

Willie Faloon commented: “The first half was a real nip and tuck affair with two evenly matched teams. Our set piece was strong today and the guys that stepped in to cover injuries were fantastic.

“We dominated that second half and thankfully got the crucial score to secure the points.”

Next Saturday, City of Armagh have an away match in Athlone when they face Connacht side Buccaneers.