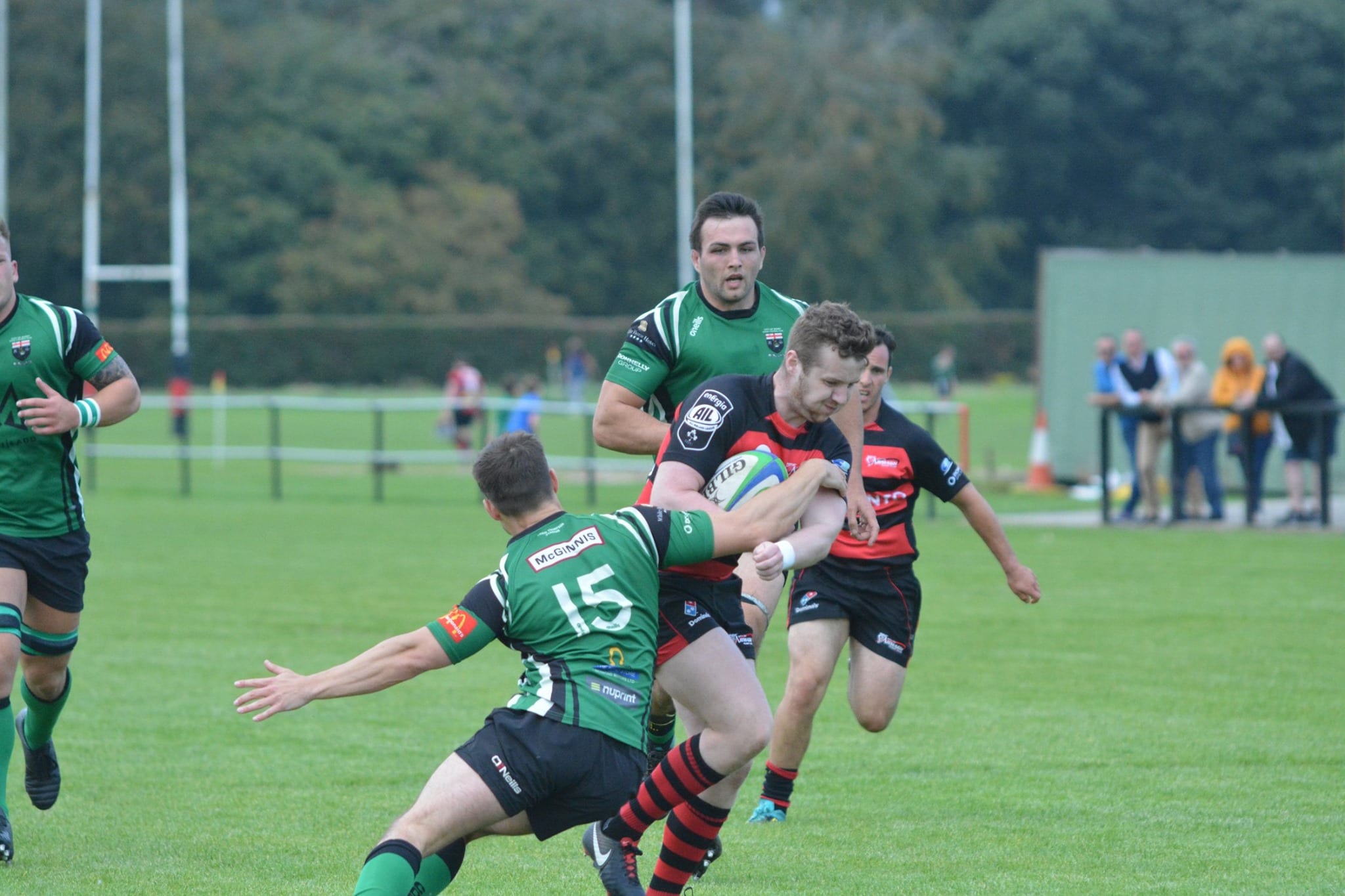 City of Derry 3 City of Armagh 39. Report by Richard Black.

City of Armagh RFC advanced to the semi-final of the Bank of Ireland Senior cup with a well-deserved win against a gutsy City of Derry team.

Armagh had made the long journey four weeks ago for a SONI Premiership fixture and the outcome was another away win, with the visitors playing some attractive rugby.

Armagh won the toss and captain Robert Whitten made the brave decision to play with a very strong breeze. Many pundits on the side lines would have questioned this but Robert knew better having consulted Barra Best and knowing that the wind would drop in the second half.

For the first 10 minutes Armagh couldn’t get their hands on the ball but with their first possession, Shea O’Brien backed himself and sprinted through the Derry defence to open the score after 9 minutes.

Out-half Cormac Fox could not convert, but was having an excellent game linking up with his three quarters and probing down field when necessary.

It wasn’t long until Armagh got their second score when with the Derry defence up flat, Cormac threaded through a neat grubber kick and Daryl Morton was able to dot down to increase the lead. Fox converted and at 12-0 up things looked good for the visiting team.

However, Armagh then got on the wrong side of referee Mark Patton and were penalised for numerous different offences.

As a result they found it difficult to gain momentum in the game and it was only in the 27th minute that they were able to increase their lead with a second try from O’Brien.

This was despite of having Josh McKinley in the sin bin for going in at the side of a ruck. Fair play to City of Derry who came back with a try of their own when their winger burst through some weak tackling to reduce the lead to 5 – 17.

Armagh suffered a second setback when Evin Crummie damaged his shoulder and Harry Doyle made a welcome return with Gerard Treanor having to play the rest of the game on the wing. 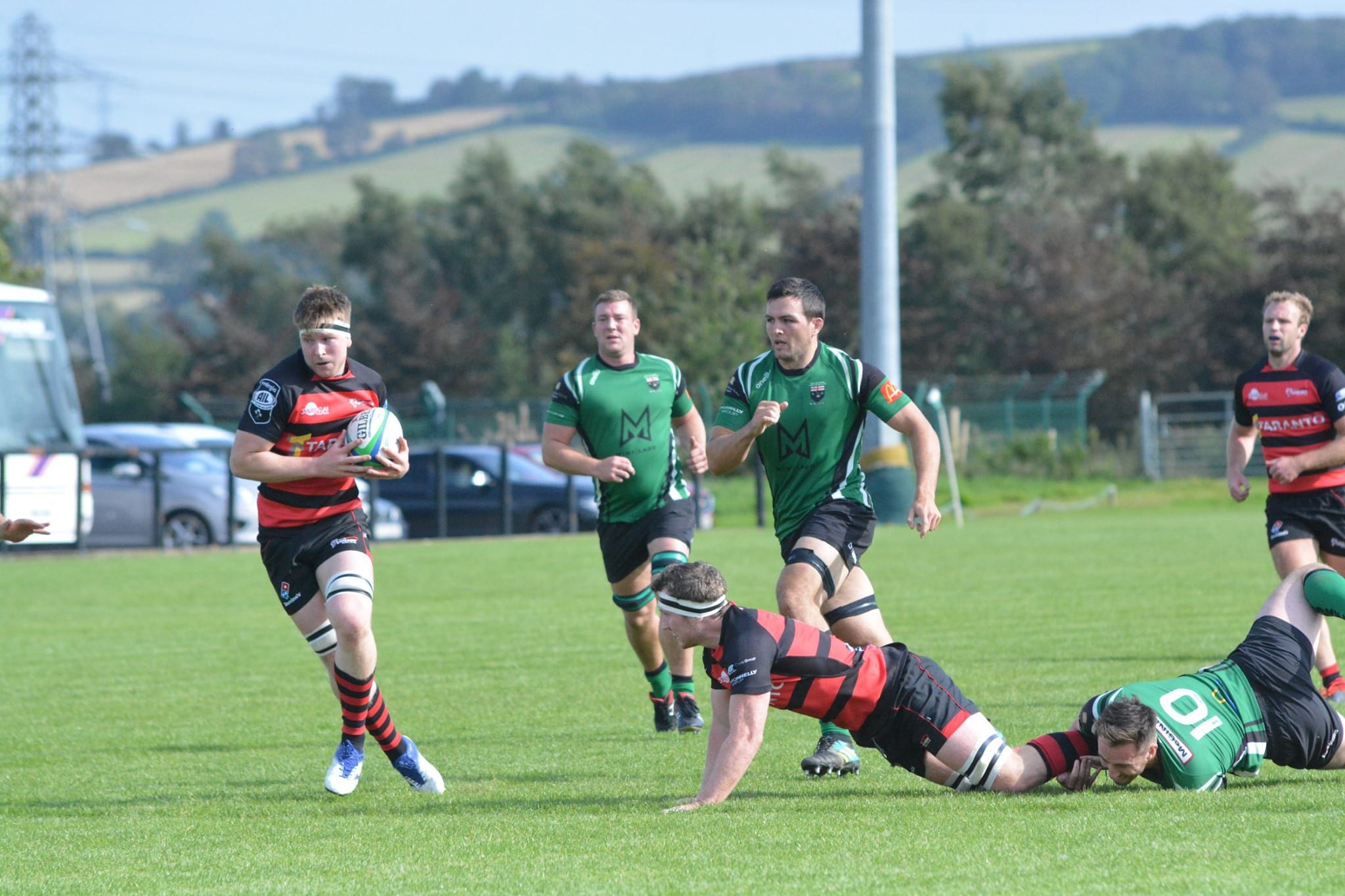 At 17-5 the score didn’t seem to be enough to face the strong breeze in the second half but fortunately Armagh strung a number of phases together and after the ball was moved from side to side, Andrew Willis was able to use his strength to power over for a converted try leaving the half time score 24-5.

Would this be enough in the second half or would Derry be confident in getting back into the game? The answer was that Armagh played excellent controlled rugby and squeezed out any Derry ambitions.

The orchard county side were confident in their own ability and with Hanna, Simpson and Whitten driving forward with the ball, Derry had to infringe more and more and after 48 minutes Fox chipped over a penalty to put more daylight between the sides at 5 – 27.

Prop Daryl Morton then scored his second try of the day in the corner after concerted Armagh pressure, making the scoreline 5 – 32. He was called ashore soon after preventing him from getting his hat trick.

Armagh’s Neil Faloon had returned to play following injury but he then sustained a clash of heads and his nose came off second best. This allowed coach Willie Faloon to rotate his subs and Andrew Smith got valuable game time, with Jonny Morton easing into the back row.

With the result now beyond doubt, Armagh continued to press at every opportunity but they still gave away silly penalties. With the match entering the final stages, Derry flanker Stephen Corr was shown a red card for taking out Shea O’Brien illegally.

With the numerical advantage, captain Robbie Whitten stormed over for another converted try. He blotted his copybook moments later when he too was shown yellow for tackling a man without the ball.

The final whistle went with the result showing a convincing victory for City of Armagh, 5 – 39.

During the match, the Armagh scrum looked solid with Phil Fletcher having to play 80 minutes, something he hasn’t done in a long time. The line-outs were tricky in the swirling wind, but both Morton and Smith hit their men, McKinley and Miller.

The back row combined very well both in attack and defence and always posed a threat.

Half backs Treanor and Fox looked sharp in the first half and Doyle had to come on for Crummie leaving Gerard to go onto the wing. Centres Pollock and Crummie combined well also in the first half and when O’Brien had to shift to the centre with Crummie’s injury, they moved the ball well, giving Willis and Morton ample opportunities out wide.

Stronger tests lie ahead and the only downside of Saturday’s game was the number of missed first time tackles missed and the number of penalties conceded.

This Saturday, City of Armagh return to SONI Premiership action with a match away to Bangor.

Armagh Thirds travelled to the maiden city on Saturday to take on City of Derry Seconds in Provincial League Two with a strong seventeen man squad.

The extremely strong cross field wind made kicking and passing the ball difficult.

In the first half, despite spirited defence, it was City of Derry who used their attacking strength to run in three tries by half time. Armagh had chances but could not convert them into points.

Early in the second half the Derry inside centre was yellow carded for persistent infringements. Armagh took advantage of the situation with props Lutton and Oliver breaking the defence and Lutton touching down between the posts.

Knipe added the points to bring Armagh back into the match. Armagh continued to play well despite the conditions but again could not take advantage and went on to concede further tries with City of Derry running out 33-7 winners.

Next Saturday the team return home to play Ballymoney 2XV.