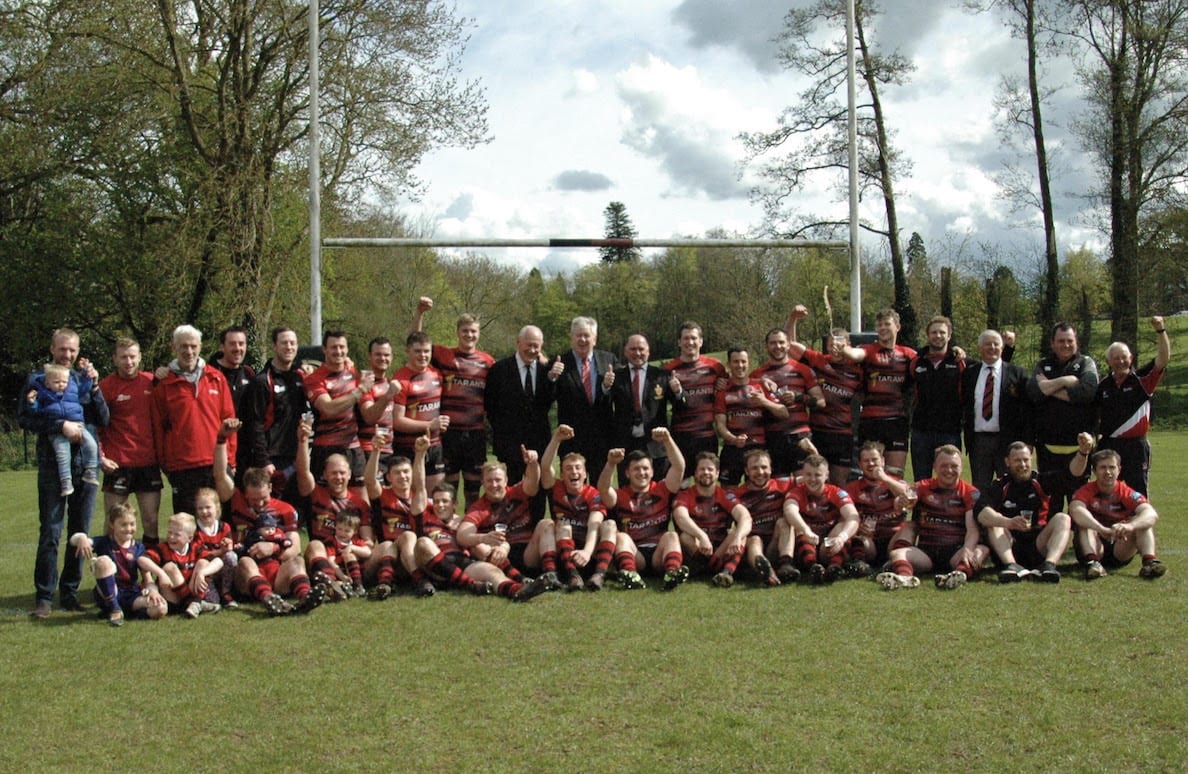 City of Armagh RFC clinched back-to-back promotions with a thrilling play-off victory over Nenagh Ormond at the Palce Grounds on Saturday.

Armagh will now be playing in the second tier of Irish club rugby for the first time in their history.

Both sides had won the away fixture in their league encounters, with over 50 points being shared in each game, so all was set for a tight affair in this decisive fixture.

It was the visitors who started brightest, gaining slight dominance at the set piece and this resulted in an 8th minute penalty from fullback Clayton Stewart to open the scoring at 0-3.

Armagh responded almost immediately when a rolling maul in the Nenagh 22 saw the pack drive over the line for Stuart Hooks to touch down. Outhalf Cormac Fox converted from near the touchline to give Armagh a 7-3 lead.

The lead was extended further when after absorbing a period of pressure from Nenagh, the ball was turned over and Armagh broke from deep with both backs and forwards taking play into the Nenagh 22.

After a number of phases the ball was spread wide for winger Robbie Faloon to touch down in the corner. Fox made no mistake with the difficult conversion and Armagh were now ahead 14-3 with 25 minutes on the clock.

On 28 minutes Nenagh narrowed the gap to 14-6 with another Stewart penalty and seven minutes later, a penalty try saw the visitors right back in the match at 14-13.

From the restart Nenagh infringed at a breakdown and Fox converted the penalty to stretch Armagh’s lead to 4 points. In the final minute of the first half, Nenagh tried to run the ball from deep but Armagh’s captain Chris Colvin was able to intercept and offload for Robbie Faloon to get his second try of the match. Fox was in superb kicking form and again converted for Armagh to lead 24-13 at the interval.

The second half commenced with Armagh controlling possession and territory and edged further ahead on 43 minutes with a Fox penalty. The young outhalf slotted over another penalty five minutes later and Armagh were now comfortably ahead 30-13.

Nenagh however had come back from similar positions to win matches and it was no surprise when they mounted a fight-back.

Firstly, Clayton Stewart converted a penalty to bring the score to 30-16 and then a try through skipper John Healy brought Nenagh within a converted try at 30-23.

With ten minutes of the match remaining, the massive home support were nervous as Nenagh threw everything at the home side. Armagh however dug deep and a dogged and resilient defensive display ensured the visitors were penned back in their own half.

The pressure exerted from the home team paid off when the referee penalised Nenagh for not releasing.

The clock was in the red by this stage and Cormac Fox kept his 100% record off the tee and sent the ball sailing between the uprights for a personal tally of 18 points on the day.

The referee brought the game to a close with the ten point victory for Armagh sparking huge celebrations at the Palace Grounds.

The Armagh coaching team were full of praise for the entire squad which delivered promotion to 1B next season.

As expected, it took an immense performance to overcome a tough Nenagh Ormond side.

Willie Faloon, commenting after the match, said: “We are all proud of the boys and the effort displayed today was a great credit to the club. Our defensive effort in the final ten minutes was crucial to secure the victory.”

Club President, John Lennon congratulated the coaching team and players for making history in bringing Division One rugby to City of Armagh.

“Two successive promotions are exceptional at this level and the dedication and commitment from everyone involved, both on and off the pitch, is a great credit top our Club,” he said.

“This has been an exceptional season and it’s not finished just yet.”

City of Armagh’s final match of the season is the SONI Ulster Premiership League decider, away to Malone on Tuesday night, kicking off at 7.45pm.

The local second fifteen took another step towards the 2 nd xv league title when they comfortably beat Banbridge seconds at the Palace grounds on Wednesday night.

The game started off in a scrappy fashion with possession changing hands several times and it was not until the 10th minute that Armagh put several phases together when good play by Kyle Faloon and Luke Crozier put debutant Andrew Winder in for a good score.

With Harry Boyd converting, the home side led 7-0. Banbridge competed well in the early stages of the game and it was not until the 25th minute that the back line created another try when Kyle Faloon make a break out wide and off loaded to Pau Gimeno who touched down at the posts for another converted try.

The sunny conditions and firm pitch were ideal for running rugby and a further try was added when Neal Lutton took a crash ball for another try at the posts.

With Boyd’s conversion, the score was pushed out to 21-0 however Banbridge offered a timely reminder to the home side of their threat when a kick was charged down on the home 10 metre line for the ball to be gathered by the visiting outhalf for a converted try at the posts. 21-7 to Armagh.

The home front row of Owen O’Hagan, Andrew Morton and Lutton were providing a solid platform with Stephen Morton and Willie Martin the power to give steady ball to the resurgent Holden at scrum half. Another backline move ended with Kyle Faloon scorching in from half way to leave the halftime score 28-7.

With coaches David Eakin’s and Wille Faloon promptings, the team kicked off the second half with renewed vigor and on 43 minutes quick ball from Holden sent Pau on his way with Winder receiving the final pass for his second try of the game, 35-7 to Armagh.

The backrow of Simms, Kennedy and McNeice were sound in defence and put in much good work in the loose creating several turnovers in the process.

Banbridge had a spell of pressure with them carrying the ball up to the Armagh line. Good defence aided by a Banbridge knock on saw Armagh clear their lines and race back up the pitch.

Good interplay by Kyle and Pau created an overlap for Glen Faloon to go over at the posts for a converted try. Winder added his third, another unconverted try to his tally to push the score to 47-7.

Straight from the restart Crozier took a crash ball at pace on the halfway line and finished off at the posts for
Boyd to convert. Banbridge were not finished and to their credit after forward pressure on Armagh’s line, an unconverted try was scored to leave the final score 54-12 to Armagh.

Another good result for the seconds which leaves them to focus on the last game of the season on Wednesday night away to Malone (7.45 KO) where they play the local seconds in the 2 nd xv league decider.

All support would be very welcome for this young exciting team.

Nutty Krust man of the match centre Sean O’Brien bagged a hat-trick of tries as the Orchard County boys finally put the Hinch to the sword.

The impressive O’Brien, well supported by fellow centre Matthew Rainey, opened the scoring after four minutes when he crossed for his first try.

It was 10-0 when O’Brien and Rainey combined after good work from the pack to send hooker Jordan Parr over. O’Brien landed an impressive touchline conversion and then a penalty for a 15-0 lead after 13 minutes.

O’Brien went over in the ninth minute of the second half for his second try, adding the extras but Hinch dug in and dominated for lengthy spells, but were unable to break down the Armagh defence.

Two tries in the last two minutes, the first from O’Brien and the second from outhalf Nathan Rodgers – O’Brien converting both – gave the scoreline a lopsided finish.

As usual with the Nutty Krust Tournament the players all received a post-match meal which was sponsored by Jim Hewitt Meats, prepared by the staff in “Scrummees” kitchen and organised by the ever present Sid Rowe. All players, as well as their coaches, then received a Nutty Krust loaf on departure.