City of Armagh 32 vs 9 Tullamore 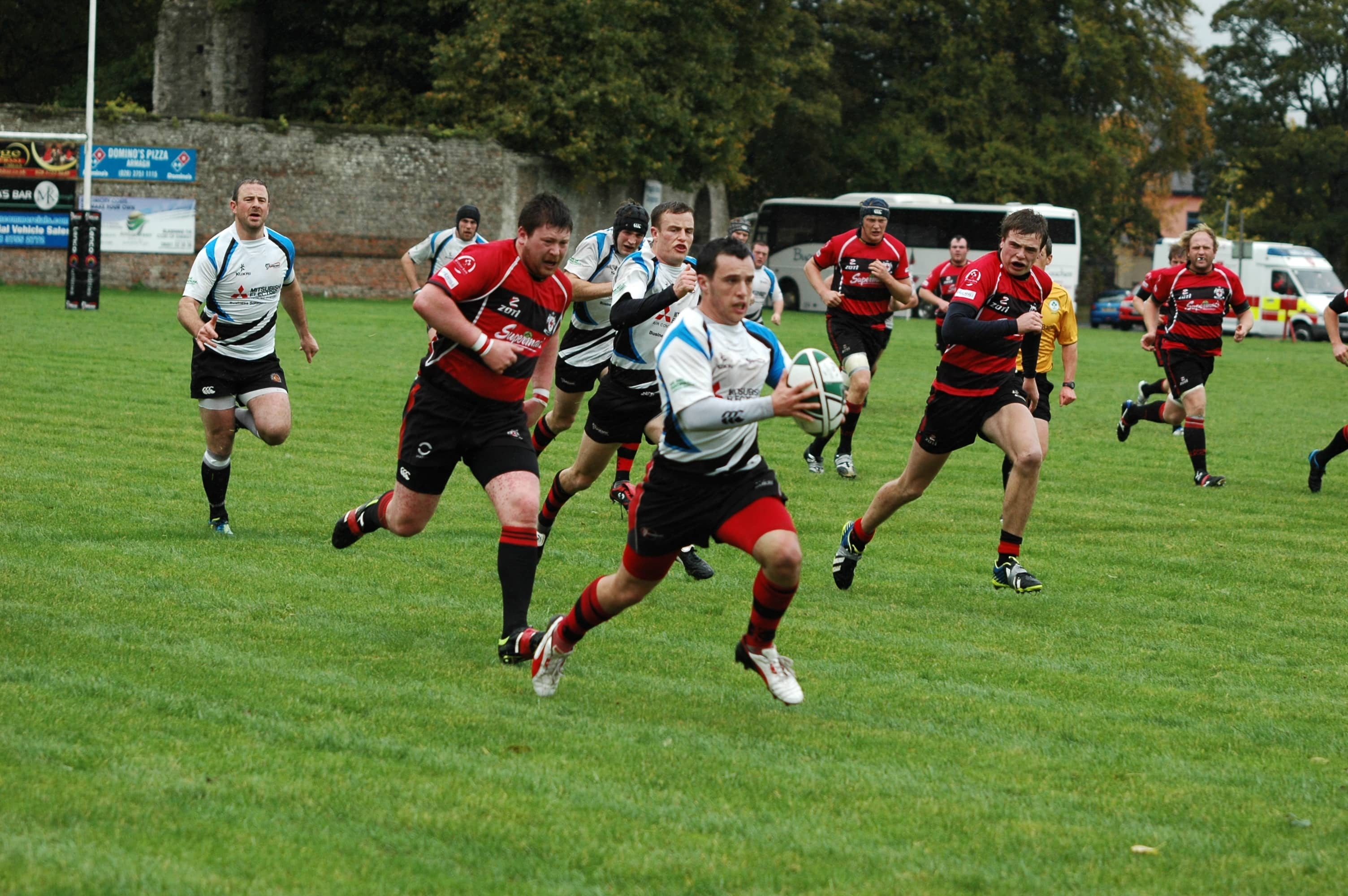 Armagh played their third game in the Ulster Bank All Ireland League on Saturday when the entertained the Leinster side, Tullamore at the Palace Grounds.

Prior to the game the newly promoted Leinster side had won their way to the league spot above Armagh securing two wins from their first two games in the league.

With this in mind the home side facedTullamore with a degree of apprehension.

The visitors kicked off with a stiffish breeze at their backs but with steady rain everyone expected a tight, forward orientated game.

The first five minute play certainly dispelled these ideas as both sides excelled by passing the ball about with apparent ease.

The Tullamore side, if anything,  looked the more dangerous and when Armagh were penalised in the sixth minute for not rolling away after a tackle the Tullamore kicker, Donal Corbett, was the first to put points on the score-board.

This appeared to force the Armagh side to settle into their game and illustrated their attitude by quickily winning two ‘choketackes’ in quick succession.

To further stamp their mark on the game scrum half, Harry Doyle, made a break and passed to left winger Andrew Willis who touched down in the corner. The wind appeared to catch the conversion and carried it to the left of the posts.

Armagh were penalised again for another rucking offence and the Tullamore kicker landed the kick to bring the score to 5-6.

Twenty eight minutes into the game sawArmagh’s response when they put another try as the in-form Richard Reaney sold a beautiful dummy to the visiting defence and scored under the posts.

This time his conversionwas on target bringing the score to 12-6. Tullamore kept their presence in the struggle as their backs made repeated efforts to penetrate the home defence but to no avail!

The only remaining points earned by the visitors came when Armagh, again were caught entering a ruck from the side, the resultant successful kick put the score to 12-9 at half-time.

After the break Armagh’s attitude seemed to change andthe whole team generally appeared up a gear and they put a period of ten minute of sustained pressure on Tullamore.

This forced the Tullamore defence into a penalty situation in front of their posts which gave Reaney the invitation to take another three points which brought the score up to 15-9.

Shortly after this yet another penalty opportunity as grasped by Reaney to bring the score up to 18-9.

Armagh now began to stamp their mark on the game when the centre, Seamus Mallon, broke the first tackle and fed a beautifully timed pass to winger, Stuart Lester who scored in the corner.

Reaney’s conversion was right ‘on th money’ to open out the score to 25-9. Coach, Andrew Hughes, now began to use his trump card as he fed the younger players off the sub bench.

It wa very encouraging to watch the skill and attitude of these players blend into the game seamlessly to push home the home win for the Armagh team.

It has to be said that the visiting Tullamore team never gave up but to see the results of several concerted forward drives up the length of the field be totally negated by the simply beautiful kicks from Reaney driving the Tullamore team back into their own ’22 area’ must have been demoralising to say the least!

This was emphasised when Armagh secured their fourth try from flanker, Riddell, which, again Reaney converted. Most importantly, this try secured the bonus point for Armagh.

In the last minutes of the game Tullamore made a final effort but the home defence held firm, granted with the expense of a yellow card when substitute Daryl Morton was caught with his hands in a ruck.

The final score 32-9 coupled with a winning bonus pointreflected the resolution of the home team coupled with the skill and enthusiasm of the young players coming up off the bench.

Coach, Andrew Hughes named Richard Reaney as his man of the match. This win must add to the confidence of the squad as they head into Munster next Saturday to play Richmond in Limerick.