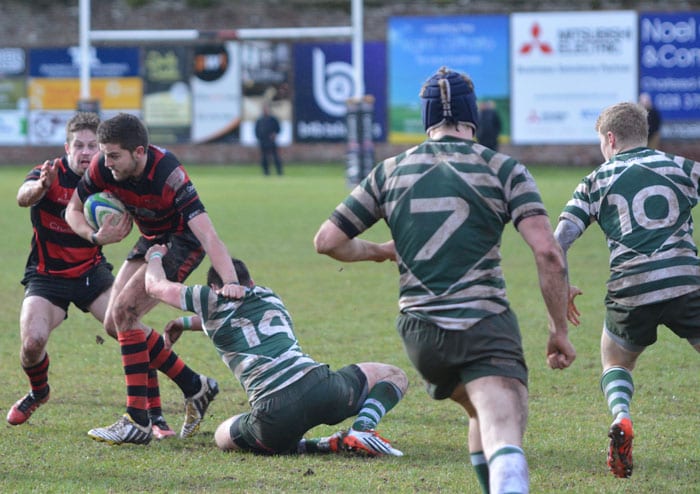 With Armagh slipping down to sixth position in the Ulster Bank All-Ireland League it was more than evident that the last home fixture of the season demanded a special effort! In September past the teams met in Greystones and the game ended with Armagh losing 17-16 when the last kick of the game secured the result for the home side.

Despite the particularly favourable weather which had run for almost two weeks, Saturday’s match conditions threatening to change at any minute from bright sunshine to blustery showers and with the direction of the stiff breeze changing by the minute as Hurricane Katie approached!

Armagh kicked-off and immediately showed their determination by dominating both open and set pieces. They were seen to turn over the Greystones forwards time after time. The Referee caught Greystones off-side just inside their half but surprisingly Harry Boyd chose to go for touch rather than points. Armagh managed to lose possession in the resultant line-out and found themselves being sent deep into their own half. Although Armagh had dominated the scrums all half the referee penalised the front row for failing to bind correctly! The attempted kick went just wide but again Armagh strayed off-side and this time the Greystones out-half, Killian Marmion, was on target to open the scoring. Just before the break Greystones were caught off-side and Harry Boyd evened the score 3-3 at the break.

At the restart Armagh appeared to step up a gear and seizing on the opportunity when a visiting forward fumbled a ball Andrew Willis scored a fine try while the referee played advantage. The wind carried the conversion wide but with the score now at 8-3 Armagh looked as if they could just win this one! Armagh kept the pressure on but found themselves penalised for ‘lifting’ a player in a tackle. The resultant line-out gave Greystones possession and The visiting no.8 scored in the left corner. The conversion came off the upright to leave the score at 8-8. Shortly after the re-start the Greystones out-half took advantage of an intercepted pass and scored a try under the home posts. This time he made no mistake and converted to bring the score up to 8-15.

With the clock ticking down Armagh continued attacking but a strong Greystones defence kept the score at bay! That was until, with two minutes remaining The Armagh centre, Hooks, forced his way through two tackles and scored in the left corner. With the score at 13-15 and one minute left the pressure certainly was on Harry Boyd to land the conversion. Despite the ever-freshening breeze The ball sailed between the uprights to even the final score at 15-15.

Isn’t it ironic that the final results of both Armagh v Greystones games this season were determined by the final kicks of each game? At the end of the day this was a really entertaining game of Rugby played by two very evenly matched sides.

The Armagh coaching team were well pleased with the improved attitude displayed by the home side. They are now in a much better frame f mind to travel to Dungannon to play the final game of the 2015-16 season. It certainly promises to be a nail-biter!