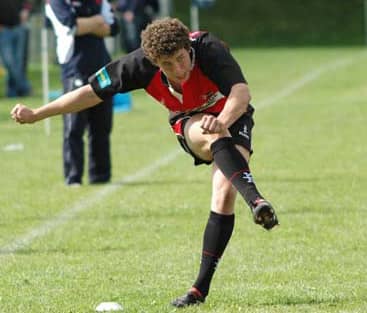 HAVING already turned over AIL Division 1B sides Belfast Harlequins and Ballynahinch, Armagh were entitled to approach Saturday’s Ulster League game in confident mood. After all, Banbridge had only managed one victory and that against an Ards side nestling uncomfortably at the bottom of the table.

But from the outset it was the visitors who called the shots, eventually running in six tries for a winning margin that was only made respectable by two late touchdowns for the home side when the win was already in the bag.

No 8 Jonny Graham, who got through an immense amount of work over the 80 minutes, opened the scoring. From a set piece in home territory, Bann recycled through five phases, giving Jonny Pollock and Mark Wilson the chance to make penetrating runs. The attack was carried on by Simon McKinstry before Stephen Irvine gave Graham the pass that allowed him to score in the corner.

Ashley Finlay’s break made inroads deep behind the Armagh lines. The ruck ball was turned over but, when Armagh were forced to concede a lineout, Finlay found Pollock with a quick throw and Irvine burrowed over the line from close range.

Armagh hit back before the break when the backs combined to send Johnny Steenson over for a well-earned try in the right corner. That same man went on to make the conversion to leave it 10-12 at the break.

But two tries early in the second half put clear water between the sides. Andrew Morrison’s scything run from a midfield scrum took play inside the home ’22’. Props Michael Cromie and Colin Bickerstaff carried ball further towards the line, allowing the third member of the front row gang, hooker Jonny Weir, to touch down at the posts and Pollock to convert.

Then Irvine grabbed his second after Graham’s pick-up and run from the base of a scrum had put the initial dent in the Armagh defensive line,

Armagh doubled their try tally after dispossessing Bann close to the visitors’ line, and Colin Atkinson touched down under the posts.

But two further tries sealed the win for the Rifle Park side. All the backs handled in a slick move finished off by Finlay, with Pollock slotting over the conversion.

Then Irvine showed his strength when he stripped the ball as Armagh mounted an attack inside Bann’s ’22’. Ryan Patterson and Pollock supported to set Morrison off on a 75 metre run to the posts, with Pollock again converting.

Armagh finished the scoring with a fine try from Matthew Steenson.

Armagh’s two late tries would have given a degree of comfort to the home supporters but in all likelihood their confidence will have taken a knock in advance of their long journey this weekend to take on Cork side Clonakilty in the All Ireland League, kick-off 2.30pm.

Armagh 2nd XV, meanwhile, are away to Banbridge in the Junior Cup, the Thirds at home to Randalstown in Junior League 5 and the Fourths at home to Rainey 4 in the Minor League South. All kick-off at 2.30pm.