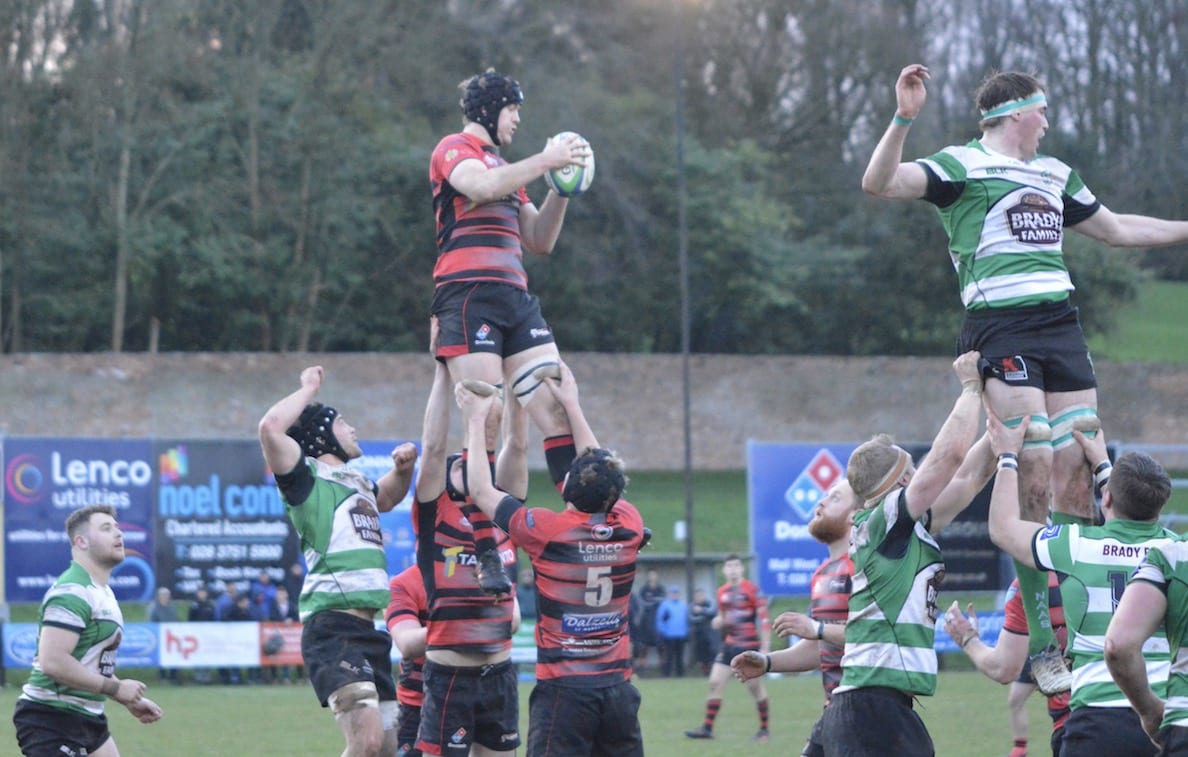 City of Armagh hosted league pace-setters, Naas, on Saturday and in a keenly fought contest, came from 3-11 down to win 16-11 and put in an excellent performance to claim four valuable league points.

Neil Faloon returned from long term injury at No8, with Harry Boyd starting at outhalf after some excellent performances for the seconds.

The match kicked off in light rain with Naas on the offensive, kicking an early penalty into the corner and with just five minutes on the clock, opened their account with 3 points from the boot of Peter Osborne.

Armagh found themselves pinned back in their half and Naas were making good use of their possession.

Naas outhalf, Peter Hastie kicked into the Armagh 22 and the home defence failed to clear, giving the visitors an attacking scrum. The ball was moved swiftly wide and experienced winger, Fionn Carr ghosted past two defenders to score in the right corner with just 15 minutes on the clock. The conversion was unsuccessful but Naas were now ahead 0-8.

The visitors threatened a second score shortly after, but a lineout 5 metres from the Armagh line misfired allowing Armagh to clear. Naas were dominating the first quarter and Hastie cut through a static home defence and a certain try was lost with a poor pass to the winger.

Armagh responded by taking play into Naas territory and put tougher some good phases with Hanna and Starrett prominent. On 25 minutes the visitors infringed close to their line and winger Ryan Purvis knocked over the penalty to reduce arrears to 3-8.

Armagh then infringed in front of their posts and Osborne stretched the visitor’s lead to 3-11 after 30 minutes.

Armagh then had a good attacking spell as halftime approached with their lively pack putting Naas on the back foot.

Following several forward drives, Harry Body Boyd put in a crossfield kick dropping on the try line. The Naas defender failed to secure the ball and winger Andrew Willis was alert to dive on the lose ball for a try. Purvis converted and City of Armagh were right back in contention at 10-11.

Naas attacked for the last few minutes of the half but a resolute Armagh defence held firm and the whistle blew for halftime with a solitary point between the sides.

Armagh kicked off the second half and seemed to have renewed energy as they took the game to Naas.

An early penalty was kicked into the corner and the Armagh pack drove for the line only for the referee to award a penalty for blocking, allowing Naas off the hook.

The home side continued to probe for a gap but the Naas defence was well marshalled. On 54 minutes, prop Paul Mullen was hit by a no arms tackle and the referee awarded a penalty which Purvis converted from 30 metres to
put Armagh ahead for the first time at 13-11.

On 61 minutes Purvis popped over another penalty to edge Armagh ahead 16-11 and a tense final 20
minutes was on the cards.

Armagh’s defence was first class as Naas looked to spread the ball at every opportunity. Shea O’Brien replaced Willis on the wing and never missed a tackle.

With five minutes remaining, outhalf Boyd picked off an interception on the Naas 10 metre line and charged into the 22, but Hastie made a try-saving tackle on John Faloon, forcing the centre into touch.

Robert Whitten then stole the Naas lineout as pressure on the visitors mounted with the experienced James Morton driving for the line.

A knock on allowed Naas to clear as the match drew to a close with Nass unable to break out of their
half. Final score, City of Armagh 16, Naas 11.

The Armagh coaching team were delighted with the team’s overall performance this week following the disappointment of the previous weekend at Buccaneers. Willie Faloon commented: “We did start a little slower in the first quarter this week allowing a good Naas team to dictate play but thankfully we pegged them back with that crucial try just before halftime.

“Our second half performance was excellent with a really sound defensive display which was needed in a tight match like this.”

Next up for City of Armagh on Saturday is a short trip to Banbridge for a local Ulster derby match, with just a single point between the two teams in Division 1B, with Armagh in fourth place and Banbridge fifth.

Armagh seconds travelled to Portadown to play a Conference League One game which turned out to be a thriller with both teams providing plenty of entertainment.

With the firsts playing Naas at the Palace grounds and there being a few late call ups, the seconds welcomed Matthew Steenson, Andrew Magowan and Michael Rolston into the squad.

Armagh played into the breeze in the first half and proceeded to go through the gears moving the ball with confidence and on five minutes had a line out five metres out.

Kennedy collected the ball with Steenson playing at six receiving and showing good feet to crash over for the opening score. Cormac Fox kicked the difficult conversion to give Armagh the perfect start, 7-0.

On 14 minutes, Kyle Faloon made a good break on the home 10 metre line to beat two defenders to touch down at the posts for a converted try. With the forwards working hard for possession and Philip Matthews Pete Lamb, and John Clark providing a solid platform in the scrums, quick ball was moved left by Gerard Treanor through the hands to Ollie Millar on the wing who made it in at the corner. The conversion was missed on this occasion, however the score was pushed out 19-0 for the visitors.

Pete Lamb made a good break up the middle for Luke Crozier to collect and touch down at the posts for another converted try, 26-0. Shortly after, a great break by Ryan Morton paved the way for Millar to collect and go over for his second to bring the score to 33-0.

At this stage Armagh started to concede penalties and after three in a row, Portadown scored at the posts for their opening points. There was still time for left before halftime for Portadown to add another converted try to reduce Armagh’s lead to 33-14.

The coaches pointed to the error count as one of the reasons why Portadown were mounting a comeback. The second half resumed in the same vein with Portadown adding two more tries, one of them converted to close the gap to 33-26.

Captain Stephen Morton rallied his troops and shortly after, Jack Treanor made the hard yards for Fox to kick to the corner.

A Portadown mistake from the resulting lineout led to Clarke snapping up loose ball for Stuart Lester and Crozier to combine, with the latter cutting a good angle to go over at the posts. Fox knocked over the conversion to stretch the lead to 40-26.

Portadown attacked again from the visitors 10 metre line and an alert Millar picked off a loose pass off to intercept and race off downfield to go over at the posts. Fox added the simple conversion and the referee blew for full-time with the score at Armagh 47 Portadown 26.

Lessons will have been learned from this game regarding game management and keeping to the game plan.

Next game up is Grosvenor at home on December 29.