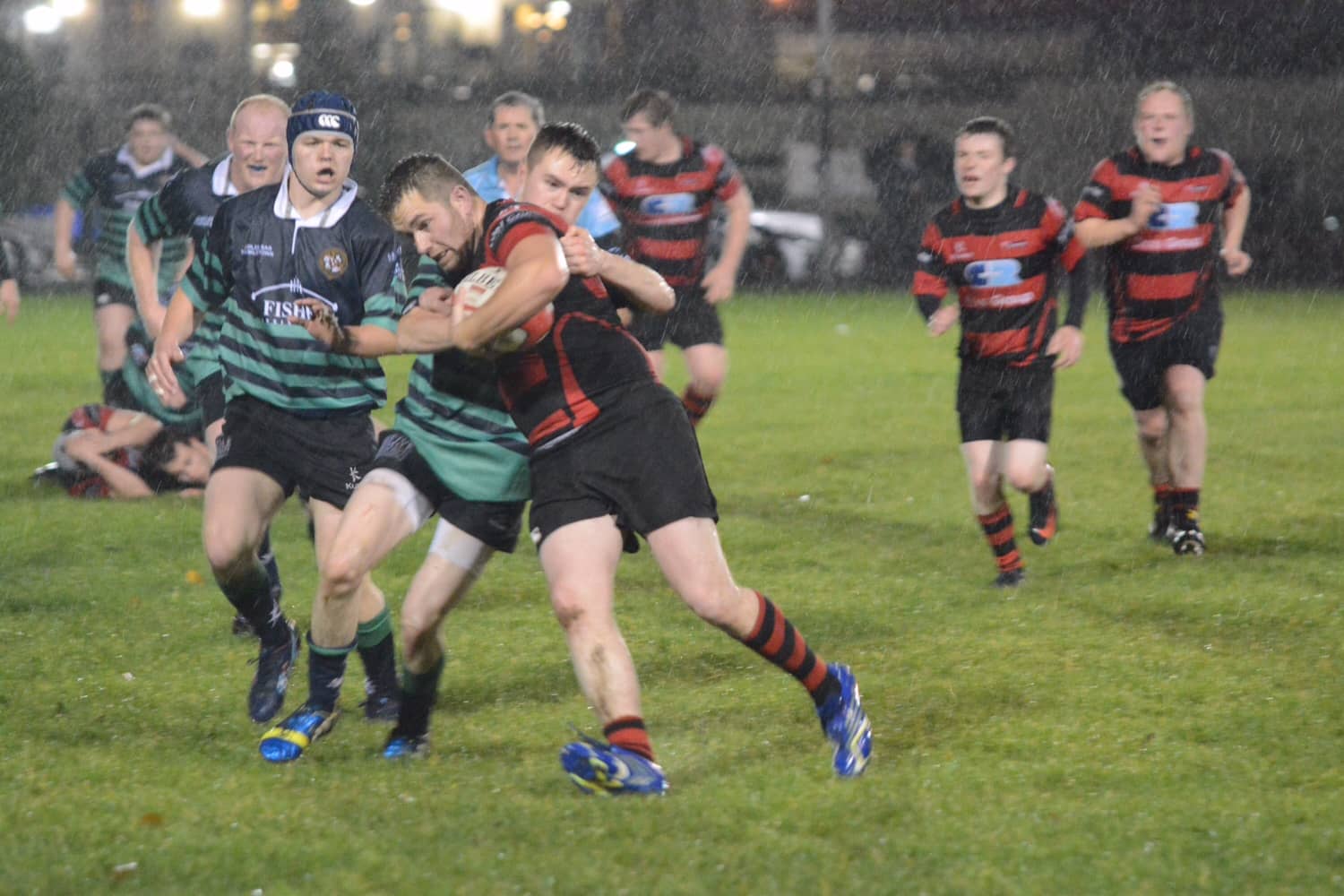 With both teams at opposite ends of the Minor League South this was not going to be easy for the lads. There were a few familiar faces in the Clogher side with past players Stanley Hamilton and Liam McElroy lining out for the Fermanagh men following their respective transfers in the off season.

The heavy rain resulted in some handling errors for both teams, it was not going to be a night for expansive rugby and this was reflected in the early exchanges of the game with both number tens opting to kick the ball deep into enemy territory.

It was the visitors who got off the mark first with a long ball deep into the Armagh 22, this saw the lads frantically trying to clear the ball from danger by running it up the field, the ball was turned over and Armagh were having to defend their line much earlier than anticipated.

After some great defensive work it was none other than Stanley Hamilton who managed to find a gap in the Armagh defence from inside the 5m and crawl over the line to score the first try of the game. Thankfully for the home side Stanley missed the conversion narrowly putting it to the left of the up rights.

The home team responded almost immediately working their way up the field and gaining great territory through the trusty boot of number ten Matthew Heaney.

The Armagh lineout wasn’t as effective as the lads would have liked however their response was, the ball was turned over and a quick tap and go saw the ball held up just shy of the whitewash. A lack of support saw the ball turned over once again and the visitors found touch.

This time however Armagh’s line out was successful and the ball was passed through the hands, the two strong centres Nathan Hall and Matthew Campbell were exploiting huge holes in the Clogher defence and making some serious ground.

With arguably Armagh’s best chance of the half there was a huge overlap on the far side of the field, a lack of communication and vision from the ball carrier saw Armagh fail to make the most of an overlap.

Not long after this Armagh found themselves mere meters of the oppositions line following a great move where Fullback Paul Campbell combined with Winger David Loughran to send Nathan Hall hurtling towards the line only for a knock on to relieve the pressure on the visitors.

The ball was swiftly cleared down field following the scrum. Another series of fruitless exchanges by both teams saw the action cease for the half with the Half Time score, Clogher Valley 7 Armagh 0.

Armagh knew when they emerged following the break that if they were going to get something from this game then they would have to start converting their wealth of possession into scores on the board.

Unfortunately they didn’t get off to a good start where this was concerned with Clogher opting for a penalty following some indiscipline from the Armagh forwards at the breakdown. The penalty was scored by Stanley Hamilton to leave more than one score between the sides.

The hosts responded with a penalty of their own from the boot of Matthew Heaney in front of the posts, however this was as good as it was going to get as Armagh would fail to score for the remainder of the game.

Clogher introduced some reinforcements and began to cause Armagh some considerable trouble, wave after wave of attacks were successfully defended however Armagh could only weather the storm for so long.

A try was successfully held up in the corner by Robert Dougan and Andy Fletcher; however this success was to be short lived.

From the resulting scrum Clogher went round the blindside of the scrum and great defensive efforts from Eoin O’Hagan and Gordon Rowntree could not prevent the try. Stanley Hamilton made it three kicks from four when he scored the conversion.

From the restart the hosts were put under pressure once more with Clogher working the ball up the field. It wasn’t long before they scored again, this time in somewhat controversial circumstances.

The ball was kicked through the crowded Armagh defence and was caught in the air by Armagh full back Paul Campbell, however in a bid to get his players back on side in great territory the encroaching Stanley Hamilton appeared to tackle the ball carrier just as he was coming back to earth.

The Armagh players switched off and did not play to the whistle as they clearly thought there had been an infringement. The Clogher lads crossed the line once more and as if the try wasn’t controversial enough there were substantial claims that Oisin McGleenan and David Loughran had held the ball up.

The referee did not seem to think so and awarded the try. The conversion was dually scored by Stanley. A spate of injuries to Gordon Rowntree and Captain David Loughran in the space of five minutes meant Armagh could empty their bench as well.

Whilst it was not the result this team wanted, they can take huge pride from the way they played the game at times especially in the first half against a much more experienced Clogher side who are challenging for honours.

Thankfully the injuries suffered by both Gordon and David are not too serious and the lads should be back in action in the coming weeks.

A busy schedule sees the fours away to Rainey next week and at home to Malone 5’s in the McCambley cup the following week.