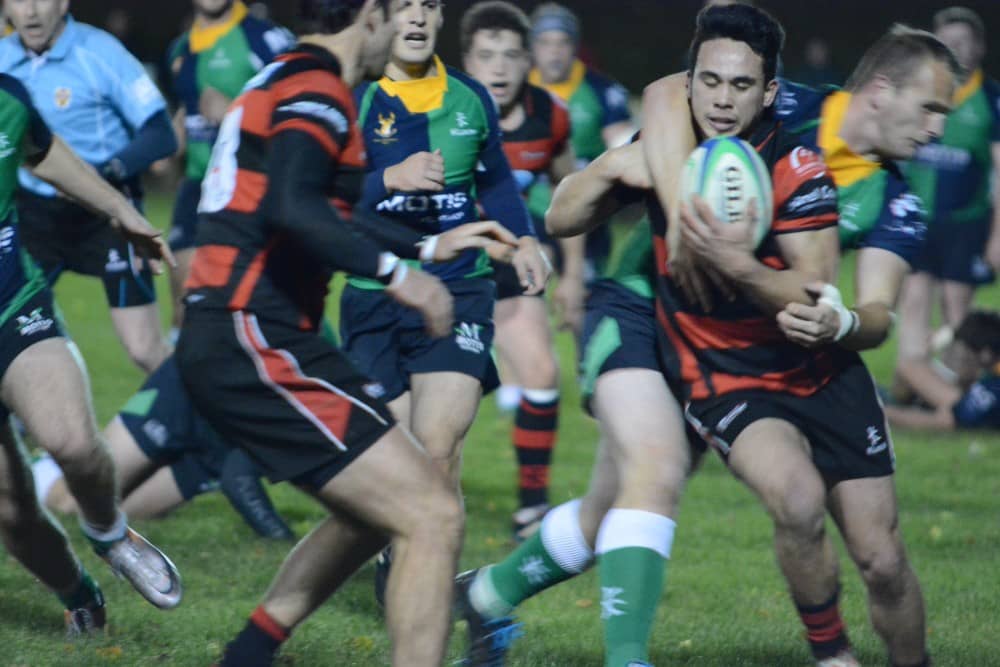 City of Armagh 16 vs Ballynahinch 17

On Wednesday evening Armagh entertained Ballynahinch in the first round of the First Trust Senior Cup.

The previous fixture when these two sides met in April last season left Armagh taking a significant six try to nil 36-3 defeat. With this in mind the Armagh team have, justifiably, generated an aura of confidence following their unbeaten 2014 season record.

Action from City of Armagh vs Ballynahinch

The playing conditions were perfect with a stiffish breeze at Armagh’s backs from the kick-off. After only 10 minutes play Armagh’ out-half, Manihera Eden burst past his opposite number and fed the ball to Seamus Mallon who scored under the ‘Hinch posts.

Matthew Steenson converted to bring the score up to 7-0. Armagh continued to show enterprise and after 35 minutes play Steenson landed another well-placed penalty kick to put Armagh 10-0 ahead. Ballynahinch, however, replied with a fine try from Kieth Dickson. This was converted by ex Armagh player, Richard Reaney, to bring the half-time score to 10-7.

The second half started off with the home side being awarded a penalty when Ballynahinch were caught off side, again, Matthew Steenson’s kick was on target.

Ballynahinch, however managed to penetrate the Armagh defense with a try from substitute out-half, McBrier.

This was converted by Richard Reaney. It has to be said that this fine try and conversion both came from ex Armagh players. Some consolation came Armagh’s way with a penalty when Steenson put the home side 16-14 ahead.

This slender lead stood until Armagh were penalised in the dying minutes of the game for improper rucking. Painfully, Richard Reaney kicked Ballynahinch into the next round of the Ulster Senior Cup as the match ended on 16-17 points to Ballynahinch.

Whilst Armagh absorbed this defeat, statistics show that the home side have matured into a seriously strong side.

As stated earlier at the tail end of last season Armagh were defeated by Ballynahinch in a 36-3 six try-fest whereas Wednesday evening’s one point losing margin match convinced the large crowd that Armagh are now progressing into,possibly, the strongest phase of the club’s senior rugby history.