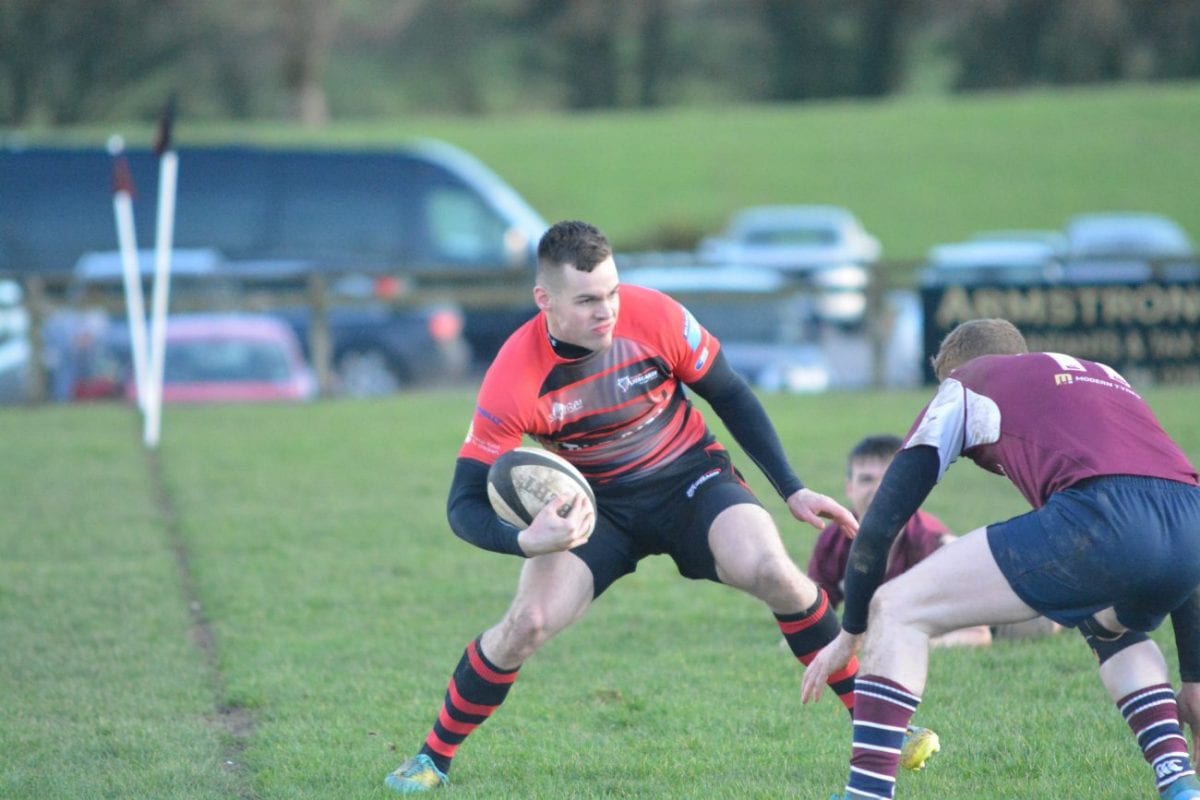 Try as they might Armagh could not get round the Enniskillen defence.

For the second time this season City of Armagh Seconds lost out to a very determined Enniskillen team in a cup match.

This time it was the Towns’ Cup in Enniskillen, where the home side ground out a narrow 12-3 victory to progress to the quarter-finals.

Enniskillen won the toss and immediately showed that they were not going to play expansive rugby but to keep it in their bulky forwards and continually drive at Armagh. These tactics worked well as Armagh couldn’t really get a foothold in the game. Initially it looked as if Armagh were going to struggle quite a bit at scrum time and they did concede a couple of early penalties. They stuck to their task though and gradually gained some parity in the scrums.

An off the ball incident had Armagh’s Stephen Morton laid out for several minutes just 15 minutes into the game. As a result he soon had to come off, being replaced by the 19 year old Aaron Whyte. The young referee had travelled from Limerick and had a difficult day maintaining order. It was when Stephen was struggling that Enniskillen struck the first blow with a sharp try by their scrum half Mattie Dane.

This was converted to give Enniskillen an early lead, 7-0. Shortly afterwards, Enniskillen worked a clever overlap to score in the corner leaving Armagh with a mountain to climb at 12-0. It didn’t help matters when full back Mervyn Brown was sin-binned for retaliating after a late and high tackle.

In the second half Armagh knew they would have to lift their game and this they did. They still had much to do but some of their decision making left their many supporters baffled. They had to get points on the board early on, but they elected to kick a penalty instead of going to the corner when they had a reasonable line-out functioning.

Harry Boyd struck the penalty well, but it came off the upright and the opportunity to reduce the score was lost. Several minutes later they had a similar opportunity and this time Boyd struck it over to give Armagh some hope at 12-3.  Try as they may, they could not break down a resolute Skin’s defence and some stray passes didn’t help their cause.

Enniskillen continued to stifle the life out of the Armagh side and the home side kept their line intact to see the match out, winning 12-3.

As far as the Armagh players were concerned there was no one who stood out in what was a very flat performance full of errors. One plus was the performance of prop, John Fletcher playing in only his third game this season in a position where Armagh have 3-4 players out with injury.

Against a powerful front row John held his own and if he can get himself fitter, he will be an asset to the side.

The side now returns to Second XV League action and will travel to play Omagh this Thursday evening in a rearranged fixture.