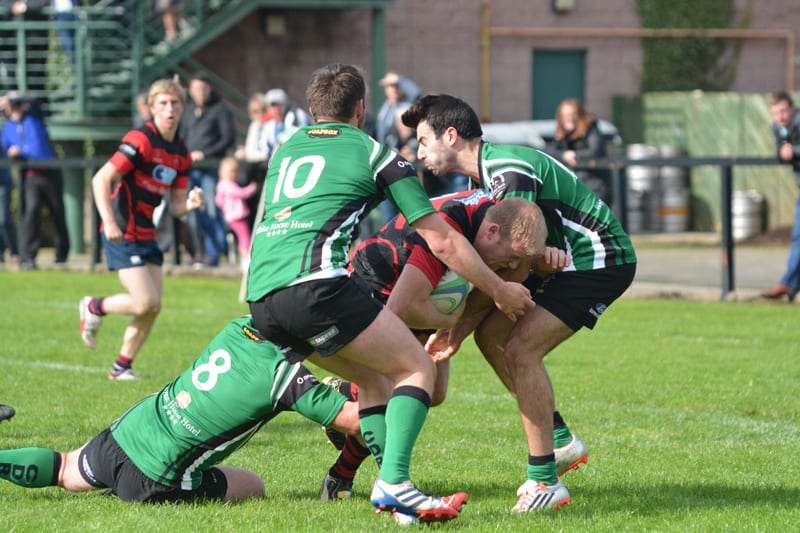 Armagh first fifteen made the long journey north on Saturday to Judges Road to play the first round of the First Trust Senior Cup against their old rivals, City of Derry.

This was always going to be a ‘Tricky’ fixture for the team. Tricky in the sense that,as it was a cup fixture, the date was arranged by the Ulster Branch.

Not 24 hours prior to the game Stephen Morton married the lovely Hanna Simms. Most of the team had attended the ceremony and, Armagh folk being Armagh folk, the festivities ran on well into the night & then on into Saturday morning!

Nevertheless, the team managed to scrape themselves together to take the field for the game. Indeed, the groom even took the field with the new Mrs Morton on the touch-line in support of her husband!

Armagh kicked-off the game in near perfect conditions but with a stiff breeze in their faces. Almost immediately they found themselves 7-0 down as Derry ran in a try only to be followed by a second followed then by a third!

It was obvious to all present that the reputed Armagh defence had been left somewhere about the Glenshane pass!!

City of Derry kept the pressure on up into the final quarter of the game when Armagh’s right winger, Luke Crozier, ran in a try in the corner.

Armagh’s Johnny Pollock sent a fine conversion over despite the freshening wind! Neill Faloon then scored Armagh’s second try five minutes later when he forced his way over the Derry line with three defenders in tow!

The final score of 40-18 was a fair reflection of the game.

But the general feeling from the Armagh quarter was to get this fixture played and start preparations for next week’s game against Dungannon in the Ulster Bank All-Ireland League.