Another massive derby win for City of Armagh against Dungannon 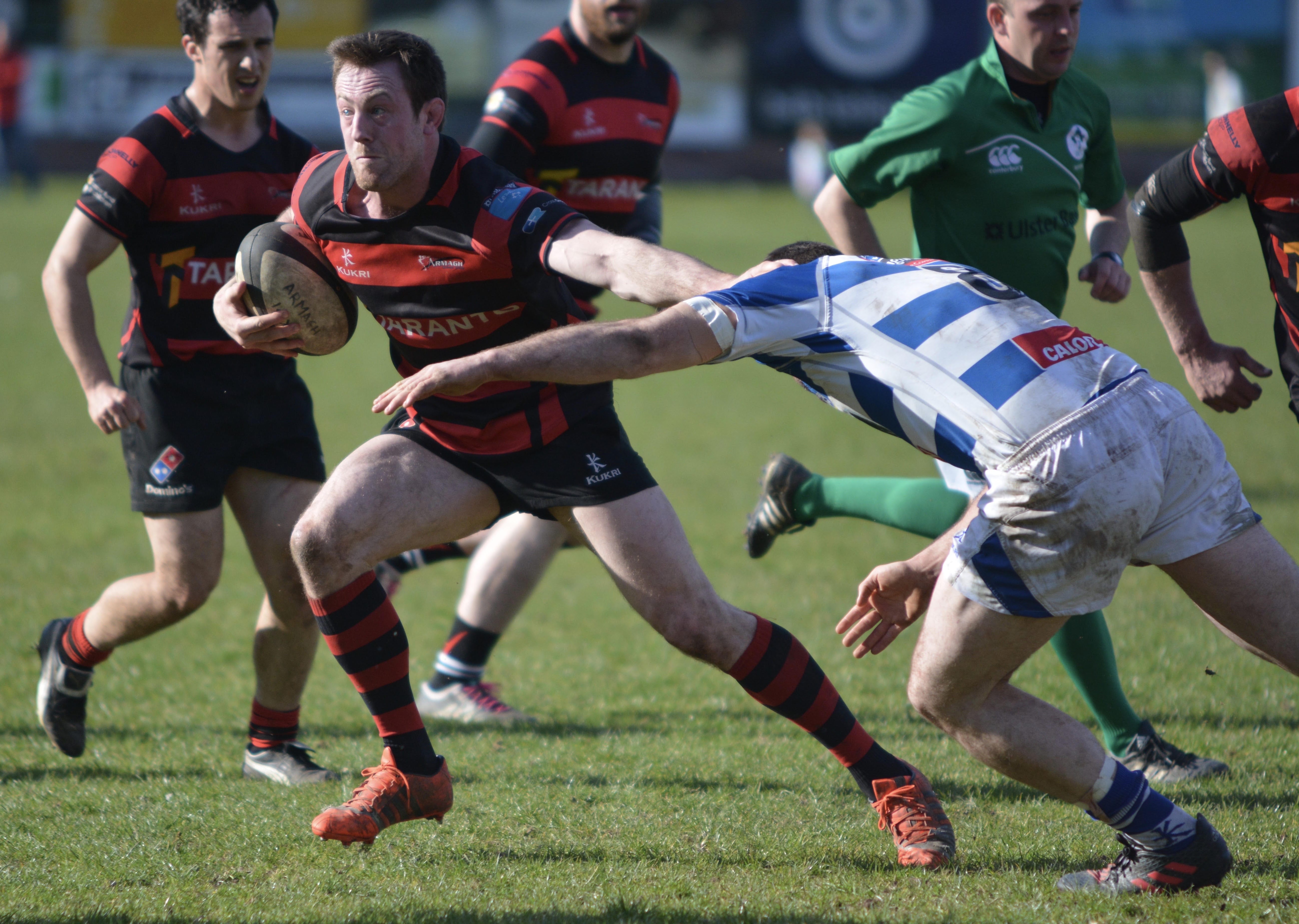 City of Armagh made it five wins in a row in AIL Division 2B and completed four victories over Dungannon this season in all competitions.

A massive crowd had gathered for this huge derby match and the glorious sunshine was an unexpected bonus. Armagh were missing their influential number eight Neil Faloon while Dungannon were boosted by the return from injury of captain James McMahon and the inclusion of dual-status Instonian players.

Dungannon kicked off and Armagh immediately took play into the visitor’s half and won a penalty from the first scrum of the day. A few phases later Harvey Young had a chance to open Armagh’s account but he pushed his penalty kick wide.

Another penalty to Armagh was kicked to touch but Dungannon didn’t contest the resultant maul and were able to clear their line. Armagh’s high intensity play almost brought them reward but a knock on close to the Dungannon line cost them a try on 12 minutes.

Young had the opportunity for another kick at goal on 14 minutes and the outhalf made no mistake to give the home team a 3 nil lead.

Dungannon then had an attacking spell in the Armagh half and a missed tackle saw Armstrong break down the wing and chip ahead.

A knock on denied the visitors a try and a series of forward drives by the Dungannon pack were repelled by Armagh to keep their line intact.

A handling error then let Armagh clear the pressure but on 27 minutes outhalf Tianua Poto kicked a penalty for Dungannon to level the match at 3-3.

Winger Andrew Willis then had a storming run on the right wing as Armagh sought to convert their dominance into points. Tim McNeice, returning at full back then took a high ball and made a good break but play was stopped as two Dungannon players had collided and second row Doran had to leave the field.

The Armagh backline looked threatening through Young and Colvin but handling errors were letting Dungannon clear the pressure.

Five minutes before the break, Armagh got the breakthrough they had been looking for. Good driving play from Birch, Morton and McKinley in the Dungannon 22 led to James Hanna crossing for the first try of the match. Young converted from in front of the posts and Armagh led 10-3.

Armagh immediately returned to the attack and a great lineout drive was halted illegally by Dungannon and McMahon received a yellow card. The Armagh forwards brought play in field and prop Daryl Morton looked certain to score under the posts but spilled the ball and the referee blew the whistle for half time.

The second half began and it was Dungannon who took the initiative and on 45 minutes Poto kicked his second penalty from 35 metres to close the gap to 10-6. Armagh then put some good phases of play together in the Dungannon 22 but Armstrong made an interception and relieved the pressure up to the half way line.

The match then took a twist on 65 minutes when Dungannon secured lineout ball following a penalty and their right winger burst through the Armagh defence. Good support play saw scrum half Gerard Treanor score under the posts. Poto’s conversion put Dungannon in the lead at 10-13. The Armagh team however bounced back immediately and put Dungannon under pressure in their 22. Harry Doyle was alert to take a quick tap penalty and scored a converted try to make the score 17-13.

Armagh’s indiscipline then saw them penalised for not releasing in the tackle and Poto’s successful kick made it a one point match at 17-16.

In a tense final quarter, Doyle made another break from the Armagh half following a quick tap and fed Andrew Willis who stormed down the wing. The pass inside unfortunately went forward and the chance was lost.

With 8 minutes remaining the Armagh forward pressure paid off as Birch drove from a five metre scrum but was held up on the line. James Morton in support made no mistake and touched down for Armagh’s third try. Young’s conversion made the score 24-16 and Dungannon were denied a losing bonus point.

The final five minutes saw Armagh push for a bonus fourth try and Dungannon’s defence became more desperate, conceding three penalties.  Armagh’s final chance saw Birch forced into touch at the corner flag and the home team were unable to breach the visitor’s line as the referee brought an exciting match to a close.

Another massive derby win pleased the Armagh coaching staff but they did rue the failure to secure a bonus point because the team were not clinical enough in the opposition half and failed to turn their dominance into points.

Next up for Armagh is an away trip to Ballymena on Saturday for their final decisive SONI League fixture.