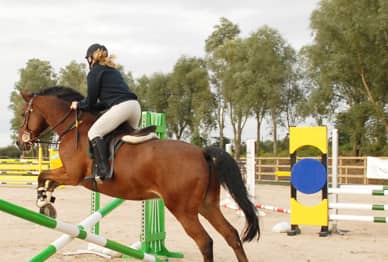 The recent wet and blustery conditions did nothing to dampen the competitive spirit at The Meadows Equestrian Centre where teams gathered as the first glimpses of day light were just about evident for the penultimate leg of the very popular Inter-Schools’ Showjumping league.

The stamina of the riders, parents and chefs d’equipe is worthy of gold medals and, as always, action began even before the scheduled 9am start.

This week Arena 2 began with the Primary Schools section where there was a little disruption to the trend of the past few months with the two Moira teams slipping down the leader board a little in favour of The Rascals who won on this occasion with a clean slate from all four combinations. The Funky Fillies from Fairview and Kildarg did likewise in a slightly slower time to fill in second place but they went one step better by winning the tack and turn out which, this month, was judged by Eventing Ireland’s Northern Region Chair, Catherine Abbott, who braved the elements to cast her critical eye over every competitor.

The individual winner was Kerry Magill and Another Chance, who zoomed around Aaron McCusker’s testing track over a second faster than second placed Laura McKay on Darcy.

The Novice Team competition had its usual high number of starters and, thanks to the valiant efforts of Cathy Young, the class completed ahead of schedule.

Royal School Armagh, who have been fielding strong teams this season, had yet another victory, finishing five seconds clear of Our Lady’s Grammar School who also caught the eye of Catherine Abbott and were awarded top marks for turn out. Credit was also given to the team from Regent House who very deservedly won the most festively dressed award.

Action was very fast and very furious in the Individual class where the red rosette eventually went to Trudie McCosh and Princess who took all possible turns in a very professional manner which proved impossible to beat. Coming closest was Lucy Savage and the very aptly named, Young Ryan’s Son.

The afternoon saw the start of the Open Team Event where no teams finished on a zero. However, fastest of the four faulters was Royal School Armagh who had a two second lead over BRA’s Pottinger Team.

Tack and Turn Out winners were a very dapper team from Friends School Lisburn.

Sincere thanks goes to all the judges, Catherine Abbott as tack inspector, starters, course designer and arena parties as well as all the competitors and their supporters whose enthusiasm and infectious enjoyment of this League make it worthwhile. Sincere thanks also goes to sponsors, Horseworld Northern Ireland for their generosity and support.