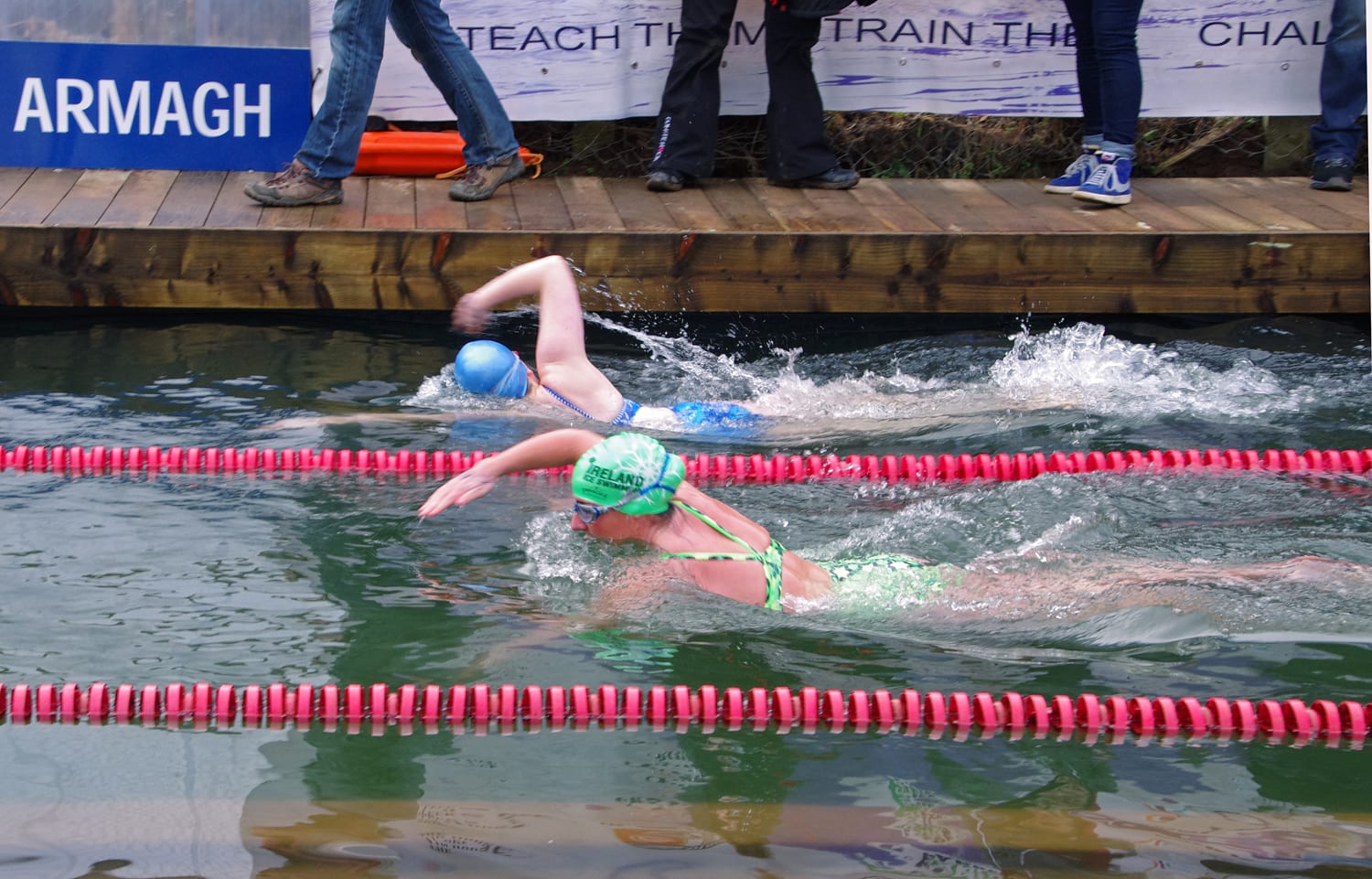 Armagh City and District Council has hosted a reception to celebrate the success of the recent Irish Ice Swimming Championships held at Wild Water Armagh, which saw a number of world records smashed.

The International event was managed by Camlough Lake Water Festival Committee, which initiated a unique programme to promote the new growing sport of ice swimming, allowing participants to experience the cold waters of our lakes and seas in a safe and supported way.

This was the first time that any country in the world had set up such a training programme and it was run under the rules of the International Ice Swimming Association. Over 40 hopeful swimmers signed up in November and started the intense physical and physiological training initiated by ice swimmers Pádraig Mallon and Nuala Moore, Ambassadors for the International Ice Swimming Association.

After four months of training, 16 swimmers qualified to swim in the inaugural Irish Ice Swimming Championships at Camlough Lake, alongside invited international swimmers.

But the unpredicted severe weather conditions in early February made Camlough an unsuitable location for the event.

Thankfully members of the committee were aware of a new project being worked on in Armagh, which included an outdoor fresh water swimming pond, a possible alternative for the event.

CLWF committee made the difficult decision to move the event to Wild Water Armagh, which then became the host to Ireland’s first International Ice Swimming Championships.

Moving to Armagh was a not just a big hurdle logistically for the team, but mentally for the swimmers, who had been used to training in an open water setting. The idea of swimming 40 lengths of a 25m pool was a new aspect to the challenge.

It is to their credit and the credit of their support teams that they were able to make that leap.

Vital members of the event were the support crew; swimmers would not be able to compete without their team managing their training and recovery.

Nuala Moore and Victoria Brylin were exceptional with the knowledge they brought to the recovery process and enabled swimmers and teams to deal with the amazing recovery challenges ice swimming brings.

As well as the participants in the Camlough training programme from both sides of the border, the event was attended by ice swimmers form Scotland, Estonia, Poland and Russia.

It was a fantastic event. All entrants successfully completed their one kilometre ice swim, two world records were broken.

Henri Karmma from Estonia set a new record for the men’s event and Donna Cooke, from Newry, set a new female record.

The team were delighted with their success and with the knowledge they gained from both their mentors and the international participants.

Ice swimming in Ireland is becoming firmly established on the international scene.

Each individual involved in this event added to its success and are to be congratulated.

Wild Water Armagh, a unique outdoor swimming pond, hopes to inspire a new generation of outdoor swimmers. They will offer an opportunity for swimmers young and old to make the transition from the indoor pool environment to the open water setting in a very safe and controlled environment.

They hope to run similar cold and warmer water international events in the very near future.

Pictured: Armagh City and District Council hosting a reception for the ice swimmers.