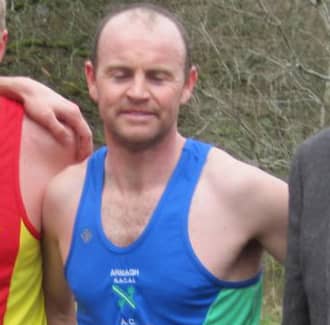 ARMAGH Athletic Club’s Paul McAnespie will be hoping his ‘run’ of good form of late continues later this month.

Paul – who has made a name for himself in the world of mountain running – will represent Northern Ireland in the Home International at Melmerly in the North Pennines on September 22.

The Armagh AC man kicked off his year with a superb second placing in the opening race of the season in the local club’s race at Slieve Gullion in March, on a time of 39:36.

His steady stream of results have so far secured a couple of International team selections, including a place on the Northern Ireland team which raced in the Snowdon International at the end of July.

Impressive Paul came in at 27th in the International section of the race when a total of 503 lasted the distance.

He had previously run a superb Flagstaff to Carlingford race in June, finishing fourth overall on a 1hr 40 min time and breaking the club record previously held by Kris Muldoon.

Most recently Paul had back-to-back successful runs in August, winning in Rostrevor and then, a week later, taking third in the Donard-Commedagh race over two of the highest peaks in the Mournes on a time of 1hr 13 mins.

Armagh’s hopes will now be resting on Paul’s shoulders when he sets off for the Pennines the weekend after next.