Big numbers on track as all five formulas entertained crowds 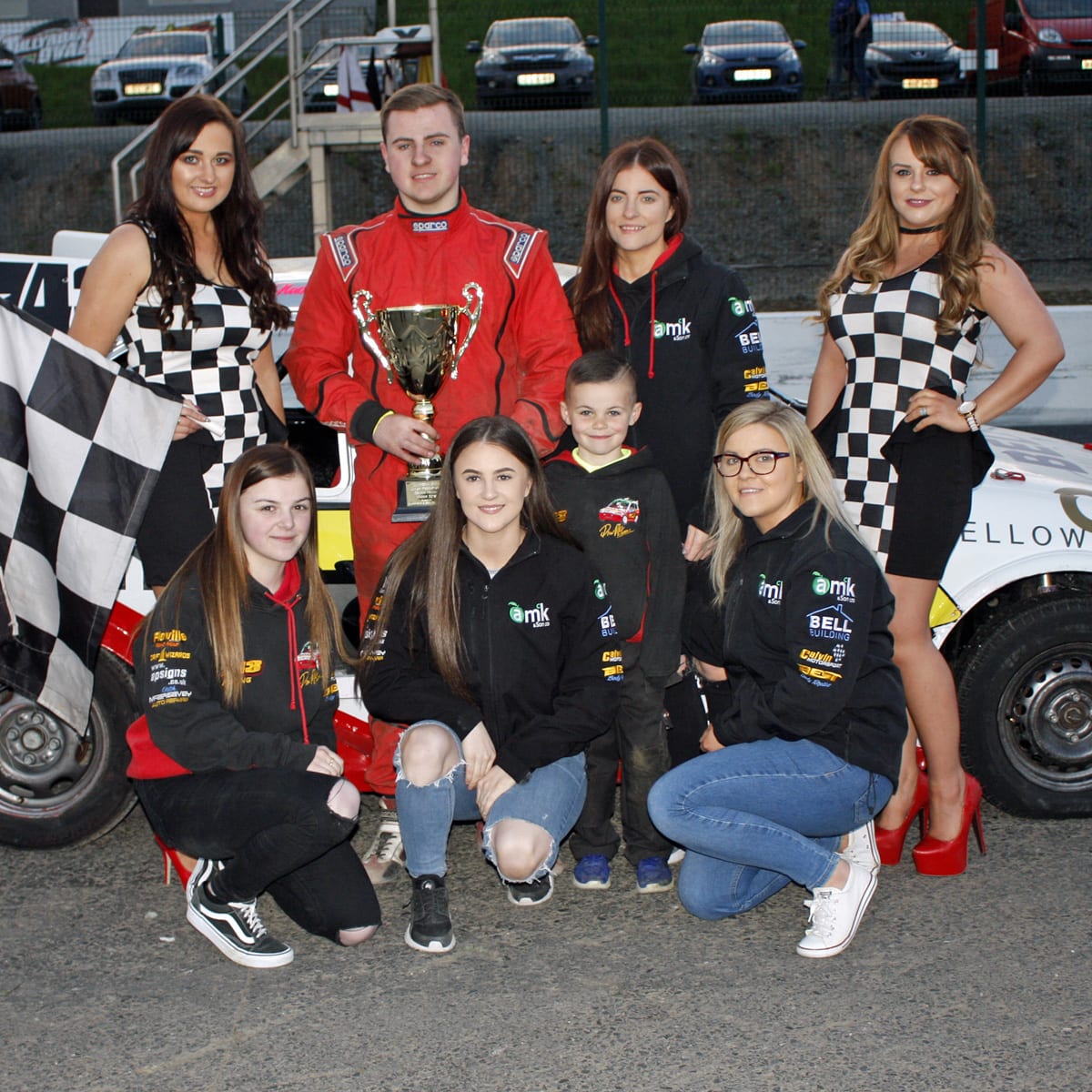 Drew McKeown won the Junior Productions Golden Helmet and is presented with the trophy on behalf of A McK and Son Fruit & Veg.

Another outstanding night of short oval racing at Tullyroan Oval on Saturday evening saw some fantastic battles on track, with Ahoghill’s Shane Murray the big winner as he scooped the spoils in the National Hot Rods final with a superb outside pass in the closing stages.

All five formulas at the A McKeown & Son Fruit and Veg sponsored meeting entertained during the evening with big numbers on track, with the other feature races falling to Bleary’s Drew McKeown in the Junior Productions Golden Helmet, Portadown’s Ryan McClure (2.0 Hot Rods), Draperstown’s Aaron Brunton (Lightning Rods) and Cavan’s Christy Bradley in the Rookie Bangers.

The National Hot Rods were contesting Round 12 of the Hankook Performance Tyres World Series NI with Andrew Stewart showing great pace in the opening heat. He quickly demoted early leader Kenny McCann and raced home to a clear victory.

Keith Martin got the better of a great scrap to take second on the line ahead of Simon Kennedy and Derek Martin. McCann again set the early pace in heat two, before he lost out to Kennedy and then a fast charging Adam Maxwell. Maxwell hit the front and just held off the advances of D Martin to take the win, with Adam Heatrick in third.

The final paired D Martin and Maxwell on the front row, with Adam getting the jump at the green flag to take the lead. D Martin quickly fought back, getting under the leader down the home straight. Maxwell fought hard to close the door, but Martin was through and into the lead.

Derek continued to pull clear out front, before disaster cruelly struck on lap 19 when he slowed with what looked like broken suspension. That handed the lead to A Heatrick who was now being tracked by Maxwell and Shane Murray’s Ginetta. Maxwell looked outside but fell back, before Murray hit the outside with just five laps to go.

Shane really had the bit between his teeth and hauled himself right around the long way to take a sensational victory over A Heatrick and Jaimie McCurdy.

For the 2017 Golden Helmet the local Junior Production aces were joined by welcome Scottish visitor Kris Watson for his track debut. Matthew Nicholl demoted early leader Aaron Ward to take the lead and the flag in heat one, but he was unfortunately disqualified for a technical infringement in post race scrutineering. That handed the win to Adam Weir over defending champion Drew McKeown and Sam McNeice.

There was very little to choose between a number of drivers, and in heat two Nicholl made amends for his earlier exclusion by taking the win which he kept this time. Ward excelled in second ahead of Graham Meek and Adam McFall.

The points were very close to determine the grid for the Golden Helmet final, with McKeown and Meek sharing the front row ahead of McFall and Weir as just four points covered the top three. McKeown led them off with Meek making an outstanding effort over the opening laps to hang in there on the difficult outside line.

It was a superb race, and McKeown was able to break free and edge into a lead that he kept all the way home to defend his title, whilst a huge battle between Meek, McFall and Nicholl went all the way down to the wire. Nicholl came home second but was docked two places for contact on McFall during the race, which elevated Meek and McNeice to the podium at the end of a great evening’s sport from the young drivers.

Amongst the seventeen 2.0 Hot Rods on track was a welcome visit from Tipperary’s Ken Moloney, with a recent regrading shuffling the pack somewhat.

Thomas Morrison and Davy Potter set the pace early in heat one, before they were all brought up short when Noel Tierney found the back straight wall. At the resumption Allen Cherry quickly worked his way through to the front to take the win over Mark Madill and Ryan McClure. The yellow graders weren’t troubled in heat two, as Potter rolled back the years to take the win over Morrison, as Aaron Beattie held off allcomers to take third ahead of McClure and Cherry.

Morrison set the pace early doors in the final, but McClure was the one to watch this time. Ryan quickly scythed through to the front and pulled clear to land a morale boosting victory over Madill, Cherry and Morrison as the star graders again failed to make an impact.

Once again the great year for Lightning Rods continued with numbers well into the twenties. This was another formula that had been given a shake up by the recent regrading and it made it hard work for the star graders all evening. Former Irish Champion Richard Stewart made the most of his drop to the blue grade with a clear heat one victory over Dylan McCann and former World Champ Scott Cochrane.

The action was frantic all evening on a packed raceway with Dermot Tynan setting the heat two pace, before another former Irish Champion Gordy McKee took his first victory since returning to the formula this term. Cochrane impressed again in second with Jonny McMillan in third.

Tynan was the pacesetter again in the feature final, sponsored by A McKeown & Son. Following two non-finishes in the heats it soon became apparent that Aaron Brunton would be a major player in this one as he rocketed out of the yellow grade. Aaron hit the front on lap 14 and was never headed all the way home to a very creditable win indeed. McMillan, Cochrane and Mark Corry were next up with Ricky Shaw the best of the star graders in fifth.

Twenty three Rookie Bangers completed the programme in style, with some excellent action on track for the fans to enjoy. Paul O’Connor was a long time leader in heat one, but he was sensationally spun by a backmarker on the exit of the final bend!

That handed the win to Sammy Fisher ahead of a recovered O’Connor and Micheal Smith. Heat two saw the action continue as National Bangers star Stevo McGrath pulled clear before spinning out of contention. That opened the door for former Shamwreck winner Mike Flaherty to power through to take the win over Fisher and Stephen Murray.

Murray led the final after passing Smith as cars went in all directions on the busy raceway. A mid race stoppage when Eugene Cadden got into trouble on the back straight also put paid to Murray’s chances as his Honda boiled up ruling him out of the restart.

As the greens went down Christy Bradley hit the front and took the win over Flaherty and Dylan Connolly after another successful night for the Rookie Bangers.