New season set to blast off the grid in early April 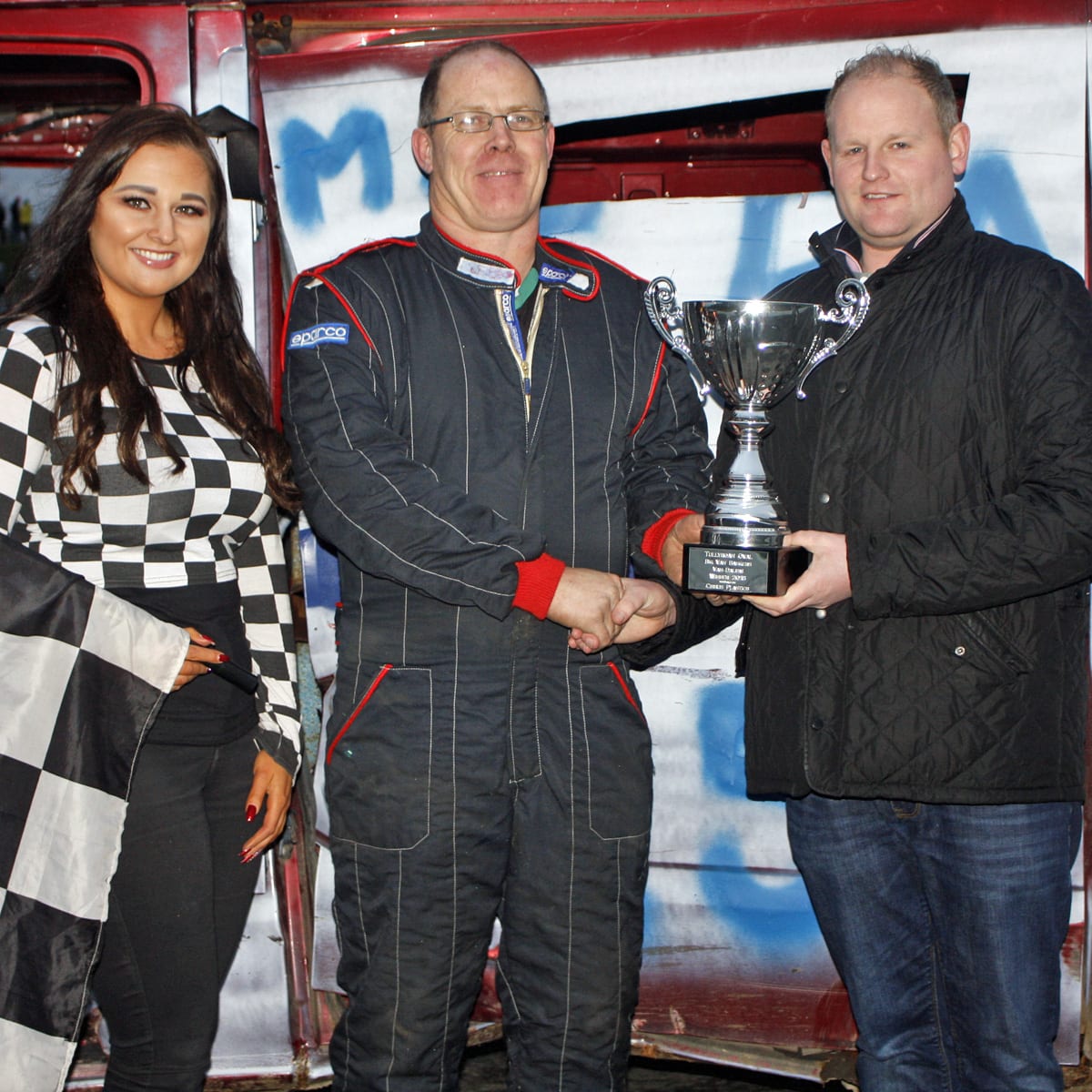 Rodney Herron won the Big Van Bangers Van-dalism feature race and is presented with the trophy on behalf of meeting sponsors Cirrus Plastics.

The Big Van Bangers headlined the annual festive meeting at Tullyroan Oval on Sunday afternoon, and served up some fantastic action for the bumper crowd.

Lisburn’s Rodney Herron avoided the carnage to land the 2018 Van-dalism title, whilst Ahoghill’s Karl Smyth overcame a huge 30+ car entry in the Rookie Bangers to take the feature race victory.

One of the best Big Van Bangers entries in recent years took to the track, and proceeded to put on three fantastic events. Dublin duo Stevo McGrath and Paul Gaffney did their best to block the track in the main Van-dalism race, with Leonard Dunn hitting the front before he lost out to a flying Stephen Boyd.

Just when Boyd looked to have victory sewn up, he was taken out in style on the final lap, which opened the door for Rodney Herron to steal through for the win in his Transit. Dunn and Gaffney filled the podium

There were more huge hits in the Allcomers race, with Matthew McKinstry getting his Transit well and truly squashed for the second time in as many races! Dunn again led and proceeded to once again get involved in aggro with McGrath and Gaffney. Herron again took the honours, this time ahead of Gaffney who was the only other finisher.

The pits crews worked miracles to return quite a field for the Destruction Derby, and once again some huge hits were handed out. Tony Gillespie’s LDV was all but destroyed, as it boiled down to a shoot-out between McGrath and Gaffney. Gaffney went in with the killer blow on the Tullyroan Bend to take the win, with McGrath awarded Entertainer of the Day.

Over 30 Rookie Bangers took to the circuit, and right from the off there was action galore right throughout the field. James Goodman and Josh McKinstry battled for the lead in heat one, with Goodman getting the nod at the line ahead of Ger O’Beirne and Aaron Eager. Heat two some more great racing, with McKinstry, Stephen Clarke and Paul O’Connor contesting the lead until they all tripped over each other on the back straight. That opened the door for Deano McGrath to take the victory over Josh Goligher and O’Beirne.

Again some amazing work in the pits returned almost 25 cars for the Final, with a battle quickly developing between McKinstry, Goligher and Karl Smyth. Smyth went in hard on Goligher on turn four, slipping through to take the chequered flag in some style. Goligher had to make do with second ahead of Eugene Cadden in third, after another action packed afternoon from the Rookies.

Debutant Simon Halligan had a start to his Superstox career that he will care to forget, as he spun on the opening lap of heat one and was collected at full chat by World Champion Lee Davison. At the restart Sean Mark came through to take the flag and continue his recent good run of form, ahead of Chris McArdle and Aaron McNeilly. Davison bounced back in style by taking heat two, ahead of Cyril Hawe and Mark.

Hawe led for a number of laps in the final, but he had no answer to the flying World Champ as Davison powered through for his second victory of the day. Stephen Stewart took second ahead of Hawe.

British Champion Dan Shannon took the victory in the opening ProStocks heat over Sam Stewart, before European & Irish Champion Steven Haugh snatched the win in heat two by nudging past Conor McElmeel on the final bend.

There was a Junior Productions debut for Jack Morrow in a fine looking new Corsa, the former Ninja Kart star acquitting himself very well during the meeting. Aaron Ward took the opening heat win over Graham Meek and Sam McNeice, the latter duo elevated to the podium after a number of penalties were handed out to the placemen.

Meek was relishing the slippery conditions, racing home to the heat two win on the outside line ahead of McNeice and Irish Champion Adam McFall.

Ward led the opening exchanges of the Cirrus Plastics sponsored final, but Meek again looked very strong as he cruised past to take the chequered flag after a very accomplished drive. McNeice and McFall completed the podium finishers.

The new Tullyroan Oval season blasts off the grid in early April 2019 – check out www.dmcracepromotions.com for more details.