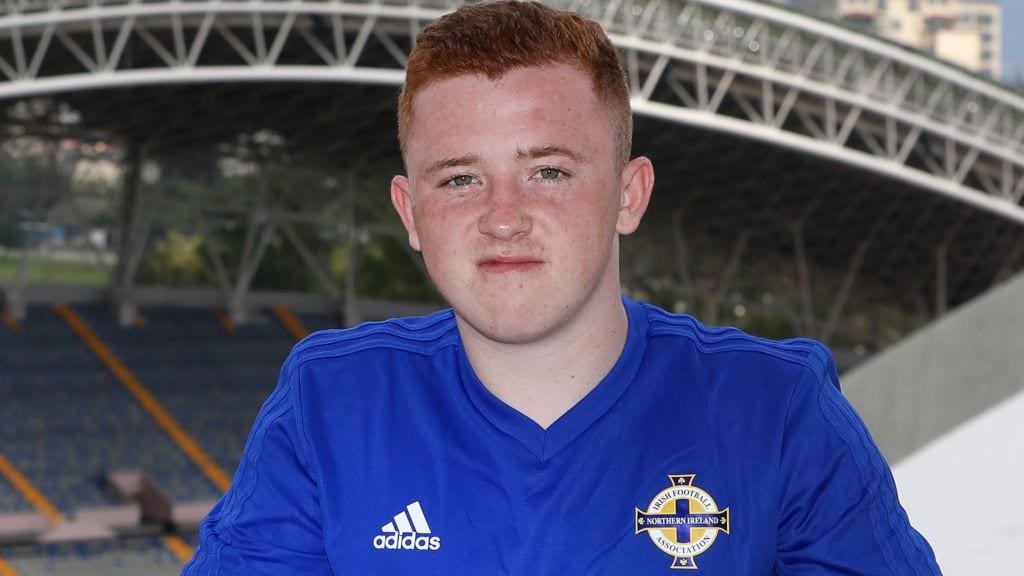 Northern Ireland will take on Bosnia & Herzegovina in Euro 2020 Qualifying on March 26.

It’s a one-off game that leads to a Path B decider, which would see Michael O’Neill’s squad take on either Slovakia or the Republic of Ireland.

Hailing from Aghagallon in Co. Armagh, Lavery started his career in the Everton youth system and was named in the first-team squad on occasion. Following a loan move to Falkirk, in which he featured in six games, he left Everton.

As a 20-year-old striker with the pedigree of coming through Everton’s academy backing him, Lavery would have had many suitors. However, the young forward decided to come home and play in the NIFL Premiership for Linfield. The move raised a few eyebrows, with some news outlets declaring that Lavery is too good for the league. Based on his playing time and statistics, coming to the NIFL Premiership was the right move for the emerging striker, and could well earn him a place in the Northern Ireland squad once again.

Coming back to Northern Ireland

After scoring his 11th goal of the campaign, against Dundalk in a 1-1 draw in the Unite the Union Champions Cup, Lavery joined up with the national team again but then drifted into somewhat of a dry spell – going eight league games and a League Cup game without just a single goal.

On New Year’s Day, Linfield fans rejoiced as Shayne Lavery got his name back on the score sheet, netting the third in a 3-0 win over Institute. Team manager David Healy praised his young forward for not hiding when things weren’t going his way and was glad that he snagged a goal.

The Northern Irish striker from the small village of Aghagallon has been fundamental in what has been a strong campaign for Linfield so far. At the 24-game mark, Linfield stood third in the table, trailing first place by two points with a game in hand. Alongside teammate Joel Cooper, at the time of writing, Lavery sits in joint-eighth in the league’s scoring chart with nine Premiership goals – none of which had come via penalties.

Assuming that the hot-shot striker can get back to scoring ways, his newfound experience could prove to be extremely useful for the national team in the games to come.

Armagh native playing for his country

While Shayne Lavery was given his first cap for Northern Ireland in May 2018 in a friendly against Panama, his first real international action came not long before he joined Linfield, in early May 2019. Since his 30-minute taste of international action against Luxembourg, Lavery has continued to be a part of O’Neill’s squad, making a couple of substitute appearances as a 20-year-old.

Now, however, the Armagh striker has earned himself bucket loads of professional experience and is much better for it – potentially making him a more viable option for Northern Ireland. When he’s on form, as seen in the Premiership, Lavery can be a game-changer: one which the national team will need.

Northern Ireland are the 7/2 underdogs against Bosnia & Herzegovina, but with the favoured Hungary at 5/4, Iceland at 6/5, and Slovakia at 6/5, it’s clear that the experts aren’t quite decided just yet. As fans have the option to cash out or partially cash out in big games, making a call on these close games or any big close games can still yield a win, should the cash out be taken.

Of the four strikers Lavery shared the Northern Ireland squad with last time out, only one is outscoring the Armagh striker so far. At the 33-game mark for Burton Albion in League One, Liam Boyce had notched eight league goals, totalling 14 goals in all competitions. Lavery had notched nine goals by his 20th game of the season.

Other Northern Ireland mainstays Josh Magennis and Kyle Lafferty haven’t been finding the back of the net as regularly as their national teammates. Magennis, playing for Hull City in the Championship, has three league goals and one cup goal across 14 games season.

Lafferty, on the other hand, moved to Sarpsborg 08 FF in the Norwegian Eliteserien in September, finishing the season with them having scored one goal in nine games. With the Norwegian season over, Lafferty moved to Sunderland on the 10th January, having only been given a cameo substitute appearance by the time of writing.

At the League One side, Lafferty may be given a chance to line-up alongside compatriot Will Grigg, who has three goals across 26 games this season. Grigg shouldn’t prove to be competition for Lavery’s place, however, as he hasn’t featured in the national squad since December 2018, with an ankle injury also contributing to his national team absences.

Shayne Lavery will almost certainly add to his goal tally before the date with Bosnia and Herzegovina, increasing his chances of featuring in a larger role in the massive games for Northern Ireland.