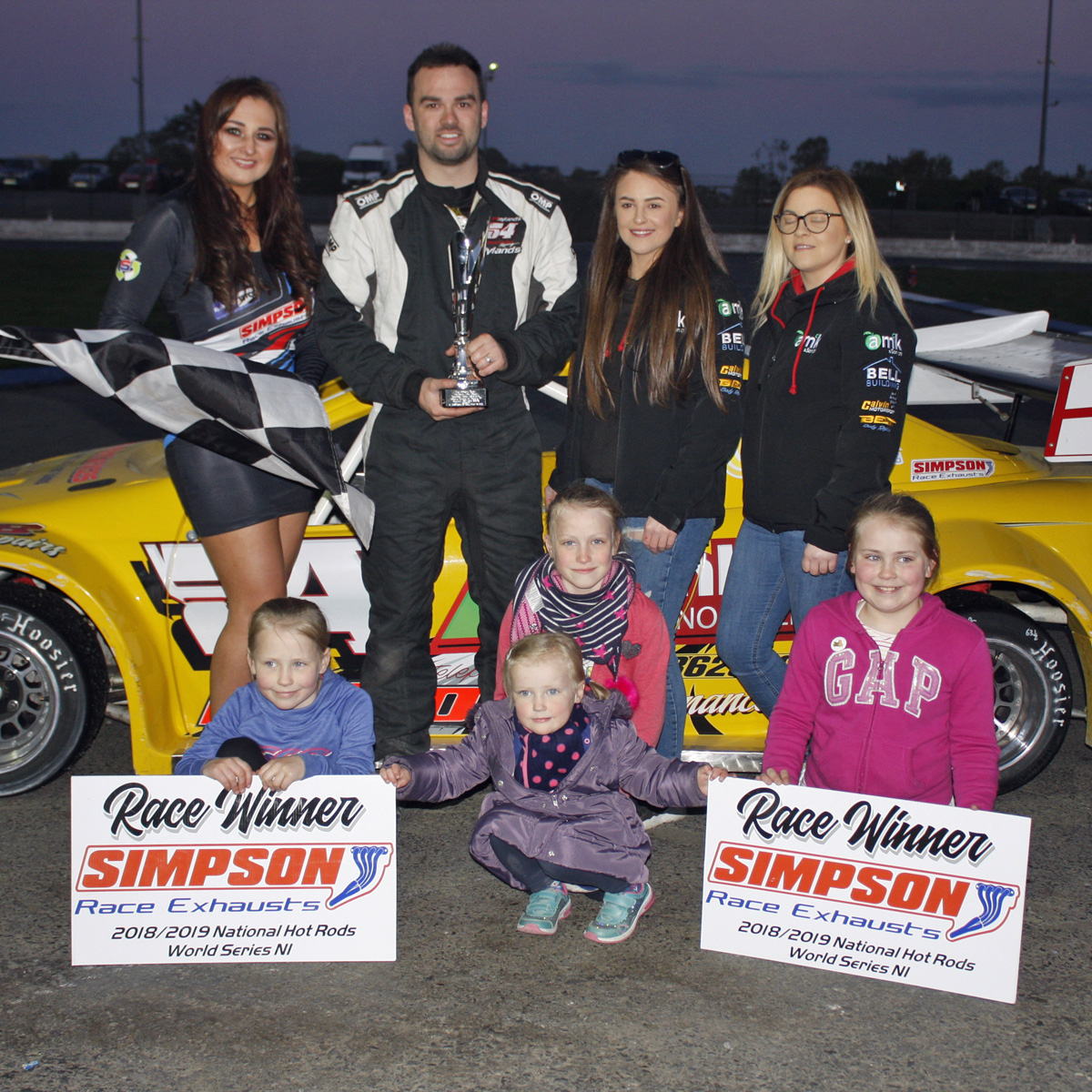 Portadown’s Adam Hylands took a huge step towards defending his Northern Ireland Championship title when he took victory in the National Hot Rods final at Tullyroan Oval on Saturday night.

On a crisp, dry evening which produced some great racing, the other feature winners at the A McKeown & Son Fruit & Veg sponsored event were local Tullyroan ace Allen Cherry in the 2.0 Hot Rods and Lurgan’s Graham Meek in the Junior Productions Golden Helmet, whilst Garvagh’s William McFaul took a heat and final double in the ProStocks.

There was drama before racing even commenced in the National Hot Rods, as a blown engine in practice sidelined Philip McCloy for the evening. That left 16 cars to contest the eleventh round of Simpson Race Exhausts World Series NI, with Simon Kennedy having a great drive in heat one to take the win over Gary Woolsey, Gary having just pipped Ian McReynolds on the line. John Christie looked racy in fourth ahead of Adam Hylands. Kennedy repeated the feat in heat two, again taking the victory, this time over a rapid Hylands, Andrew Stewart and Woolsey.

From pole spot Kennedy was first to show in the final ahead of Woolsey and Hylands. Hylands was on top form, and he quickly relegated the top duo with some great driving on the outside line. Adam’s pace was simply electric, and he stormed home to the win over Christie and Glenn Bell, with Carl Sloan and Derek Martin next home.

There was a dream debut in the 2.0 Hot Rods for former Junior Productions Irish Champion Drew McKeown, as he took victory in his first ever race ahead of fellow impressive novice grader Dean McFarland.

Adam Best was the first of the star men home in third ahead of Allen Cherry. McFarland held sway out front in the second heat, before McKeown pulled off a superb pass late in the race to take his second victory of the night, which earns him an immediate rise to the yellow grade. Gary Wilson was right on his case at the end, but he had to settle for second over McFarland and Cherry.

With a closed grid format for the final in the opening round of the Hoosier Racing Tyres Challenge Series, it left rookies McKeown and McFarland on the front row ahead of the experienced Cherry and Best. As the greens came out McKeown got slightly out of shape as the power went down, allowing Cherry to pounce down the inside to grab the lead. From there he extended his advantage to finish well clear of the pack, winning a brand new Hoosier race tyre courtesy of the series sponsors. Best made it through to second but was docked for contact on Scott Cochrane, which elevated Wilson to the runner up slot ahead of Cochrane and Best.

The opening Junior Production heat saw a great win for Randalstown’s Sam Percy, as he romped home clear of Mark Crawford and Irish Champion Adam McFall. The second heat saw James Stewart this time take the win, holding off Graham Meek and Jack Morrow all the way to the flag.

There was a closed grid formation on points scored for the A McKeown & Son Golden Helmet Award final, with Meek simply powering away out front to claim a fantastic win.

Graham really is on top form at present, and he received the magnificent perpetual trophy ahead of Matthew Nicholl and Morrow. McFall had crossed the line second but he found himself disqualified by the Race Stewards for spinning Morrow from second spot.

Once again the ProStocks were back on form, producing four excellent outings as the numbers continue to hold up. Dylan Booth took a clear win in heat one over Darryl McAleese and British Champion Dan Shannon, with the bumpers put to good use in a great race. Heat two saw William McFaul burst through to the win over European Champion Steven Haugh and Shannon.

The feature race final was outstanding, as David McKinnon led early on until he was finally outdone by McFaul late in the race. There was great racing in the pack, as McFaul took his second win of the evening to earn a rise to the star grade for the next meeting. The ever improving Sam Stewart and Booth completed the podium.

The night finished with a winner takes all Dash For Cash, which saw another great event with McKinnon, McFaul and Joe Largey exchanging blows and the lead over the final few laps. Largey was ahead when it mattered though, ahead of McKinnon and McFaul.

Racing continues at Tullyroan Oval on Saturday evening (May 11th) with a six formula festival of racing. The National Hot Rods once again take centre stage with the latest round of Simpson Race Exhausts World Series NI, whilst also in action are the Lightning Rods, Superstox, Rookie Bangers, Junior Productions and Ninja Karts. Racing starts at the slightly earlier than usual time of 6pm.