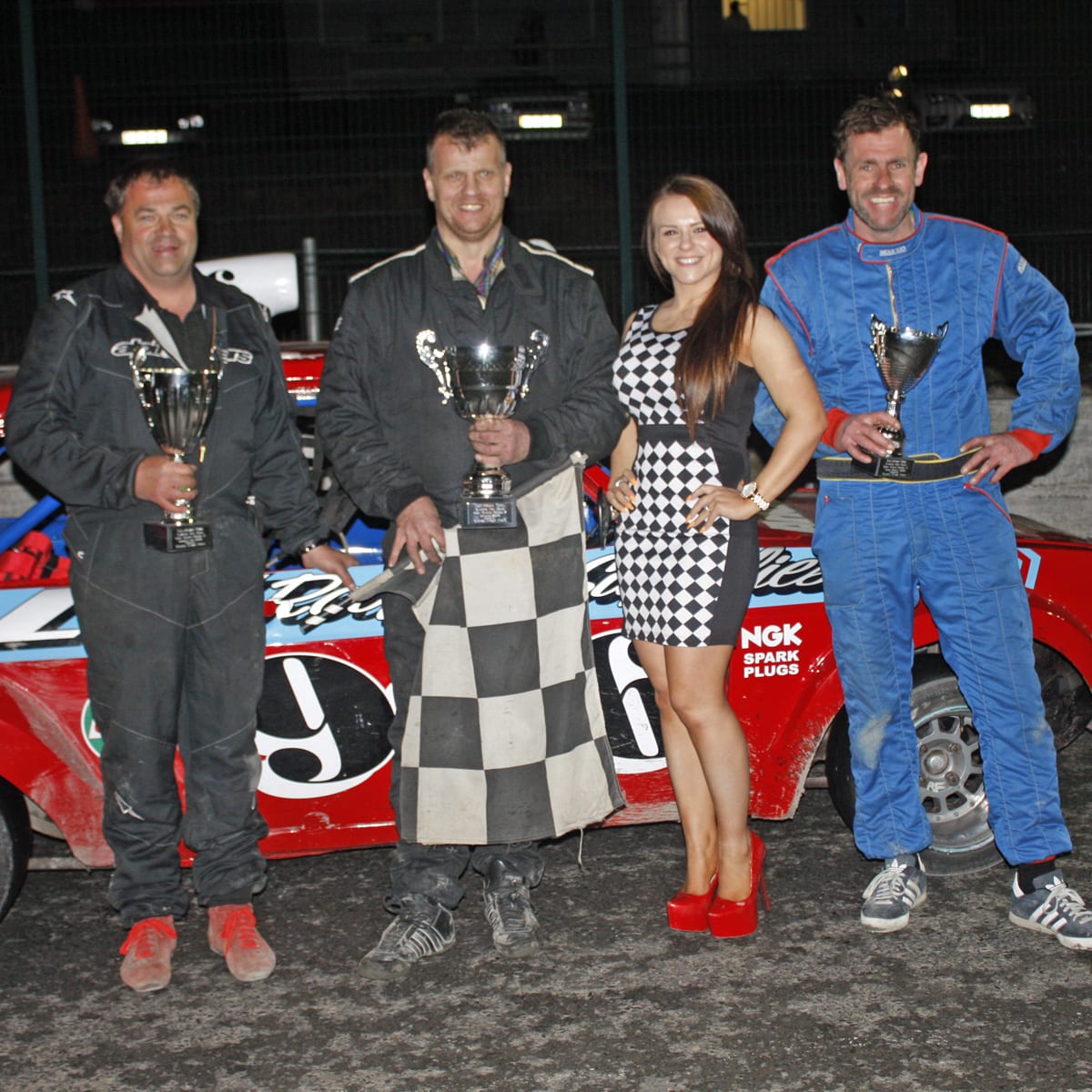 Following a very wet afternoon, the drivers at Tullyroan Oval on Saturday night were fortunate that the rain cleared and the track remained mostly dry to produce a fine evening’s racing.

The big winner was local ace Thomas Dilly, who reeled off a hat-trick of Classic Hot Rod wins in the second round of the Irish Series.

An excellent entry of ten superb Classic Hot Rods greeted the race fans in the pits, with the older generation cars certainly attracting some much warranted attention. Amongst the entry were class debuts for Alan Leonard’s stunning Opel and Jeff Richardson’s Mk 2 Escort. Dungannon’s Thomas Dilly was soon chasing down Co. Cork’s Austin Fitzgerald in the opening heat, powering ahead on the outside line on lap six. Annaghmore’s Clive Richardson impressed on a run through to second, with Andy O’Donnell and Ant Morgan tripping over each other late on. Fitzgerald again set the pace in heat two, with Dilly again playing catch up once he had demoted O’Donnell. Dilly again went ahead, but a misfire was robbing him of valuable speed. An inspired Clive Richardson quickly got on terms with the leader, but couldn’t make the outside move stick and had to settle for second ahead of Fitzgerald.

Fitzgerlad again took the lead from the off in the final of Irish Series Round 2, and again had the flying Escort of Dilly chasing him down.

Clive Richardson was again on top form, and he and Dilly began a ferocious battle for the lead. Time and again Clive dragged his RS2000 bodied car alongside Dilly, but he just couldn’t complete the move. At the line they were only inches apart, with Dilly taking his third victory of the night, ahead of Limavady’s Gary O’Neill and Trevor Cusack.

A very pleasing entry of sixteen Superstox included debutant Warren Martin in a very pretty new car indeed. The first of the graded order heats saw Andrew Morrow surge clear early on in his RCE chassis, and despite the best attentions of Cyril Hawe and then Lee Davison, Morrow just couldn’t be caught. He took the flag ahead of Davison and Denver Grattan for a deserved win.

There would be no repeat in heat two however, as Morrow was sidelined early on having been depositing fluid onto the raceway. That opened the door for impressive novice Martin, who led the way until just three laps from home. Gary Chambers then bumpered his way past to take the win, ahead of Grattan and Martin.

It was a closed grid on aggregate points for the George Fegan Tyres Tullyroan Challenge Cup, with Chambers on pole ahead of Grattan and Davison.

There was an immediate red flag when Hawe lost a wheel amongst the shenanigans of the initial start, before Chambers established himself up front at the second time of asking. There was little to choose between the top three all the way home, with Chambers taking the win in style over Grattan and Davison.

A great entry of twenty Stock Rods were boosted by welcome Tipperary visitor Alan McCormack and returnee Ivan McMillan, with early heat one leader Ed Davis quickly losing out to Jonny Gillespie. Gillespie had no answer to flying Ahoghill man Marc Morrell, who moved ahead with five to run to take a great win over Micky McFall and Steve Gooch.

Davis was much more to the fore in heat two, establishing himself out front ahead of Gillespie. McFall was fighting a rearguard action in third, holding off allcomers until Gooch got by to chase after the leaders. They were just too far down the road though, with Davis taking a deserved win over Gillespie and Gooch.

Gillespie and Davis shared the early lead in the final, before losing out to a flying Colin McNiece.

He had Rod Fleck right on his case for a number of laps, before things got messy out onto the back straight which led to the demise of McNiece. Fleck completed the final laps to take the chequered flag, but was docked in the final analysis for the earlier contact on McNiece. That handed the victory and the silverware to Taggart, ahead of the impressive Gooch, Fleck and McFall.

Novices Mark Overend and Dermot McGirr battled for the early lead in the opening Lightning Rods heat, before Ally Neill powered ahead to take up the running.

He had no answer to rapid star man Jordan Rochford though, who sped by to take a deserved victory ahead of World Champion Scott Cochrane and Winston Weir. Overend was again the early leader in heat two, before losing out to his stablemate Mark Corry. Portadown man Corry then reeled off the remaining tours to take the win, ahead of a very sharp looking Weir and Neill, the latter at the expense of a demoted Alastair Stewart who fell foul of the stewards for contact.

Overend again gave way to Neill at the front in the final, before he in turn had to give best to Stewart as they approached half distance.

A late race caution brought the pack onto Alastair’s tail, but saw reigning NI Points Champion Richard Stewart unfortunately disqualified from the restart for overtaking under the yellow caution flags. Alastair Stewart looked to have all under control up front, before he was punted wide by Corry into the final turn. Corry took the flag but was unsurprisingly docked two positions for the illegal contact, handing the second victory of the evening to Rochford.

Weir inherited second ahead of the relegated Corry, with Alastair Stewart the unluckiest man in the stadium as he trailed home in sixth having been so close to the silverware. In times gone past the Malcolm Girling rule would have rescued Alastair and reinstated him to the win, but with it no longer in the rule book, except for exceptional circumstances, he was left to rue what might have been.

The Junior Productions fielded an excellent twelve young drivers, including the first outing for the new Ben Bruce car.

The opener was controversial to say the least, with a number of retirements following various skirmishes around the circuit. Shea Duff was the first across the line, but he was adjudged to have jumped a restart and was docked to third, handing the win to Ballymena lad Jack Hazlett ahead of Drew McKeown. McKeown was the man on a mission in heat two, pulling off a superb opportunist pass to take the lead in the closing stages and grab a fine win over David Gurney and Duff.

Sam McNeice was the first to show in the final, holding off Hazlett early on before the heat one winner found a way past on the inside to take up the running. Gurney and McKeown were now chasing young Jack down, but he showed maturity well beyond his years to hold them off to take his second win of the evening ahead of Gurney and McKeown, at the end of what was an excellent feature race from the young stars.

Racing continues at Tullyroan Oval in two weeks time (May 21st), when the feature event is the A McKeown & Son Golden Helmet for the Junior Productions. 2.0 Hot Rods, Lightning Rods, Stock Rods and ProStocks complete the bill, starting from 6.30pm.

Picture: The Classic Hot Rods made their first appearance of the season at Tullyroan on Saturday night and Portadown racer Thomas Dilly took the win leading home Clive Richardson and Gary O’Neill.