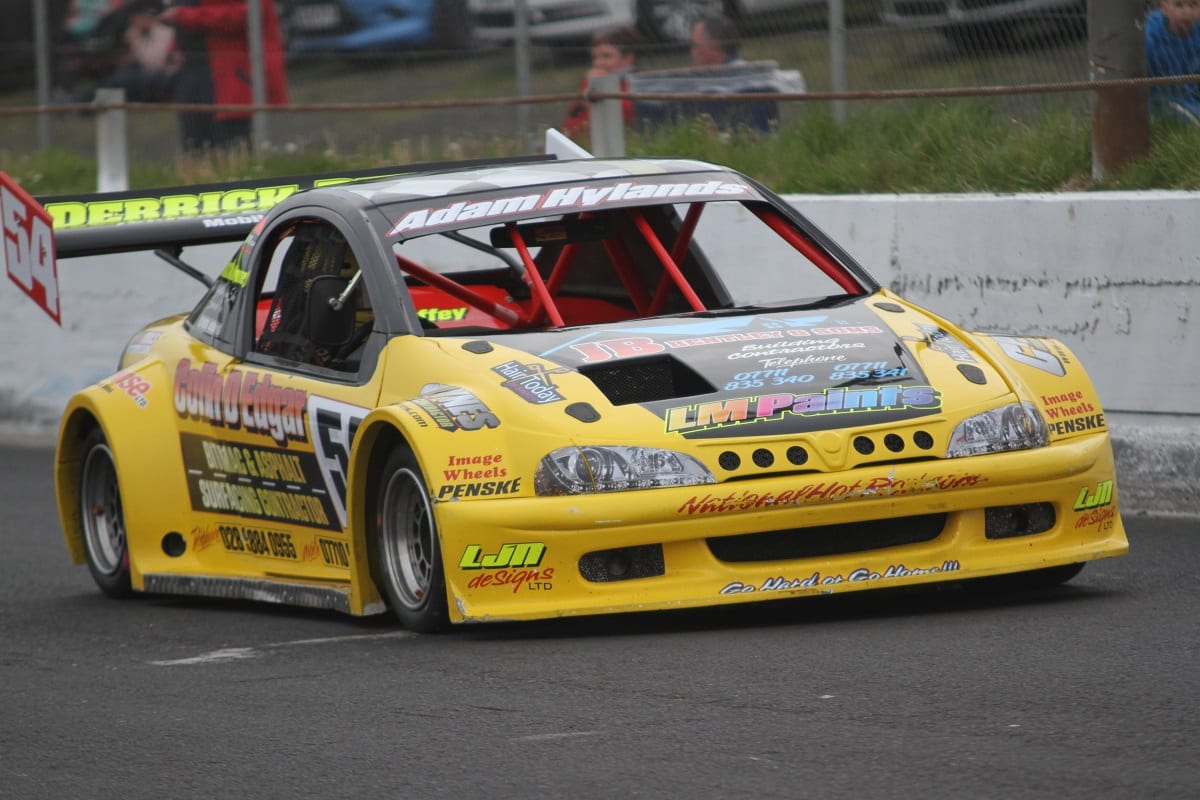 Portadown based National Hot Rod star Adam Hylands will put his British title on the line when the event headlines the Tullyroan Oval September Speedweekend on Saturday 2nd (4.30pm) and Sunday 3rd (1pm).

A full programme of racing action is programmed for the two days, also including the Superstox European Championship and the Classic Hot Rods Irish Open Championship.

The National Hot Rods are the elite formula of the short oval circuits, and some breathtaking action lies in store across the two days as they chase the Dilly Roofing Supplies British Championship. Hylands always excels around his home Tullyroan circuit and will be keen to repeat his success of last season, but he will face stiff opposition from fellow Portadown driver Glenn Bell. Bell is a two times former British Champion, and also ran Hylands very close in last season’s British showdown. Northern Ireland Champion Shane Murray will be another major threat in his new Ginetta, whilst crowd favourite John Christie will be chasing the only major title he has yet to add to his CV.

Dungannon pair Derek Martin and Keith Martin, Portadown’s Adam Heatrick and Mark Heatrick, Broughshane’s Jaimie McCurdy and Portadown’s Stewart Doak will be amongst the challengers too, with the field also bolstered by some very impressive visitors. Scotland’s Robert McDonald has carded podium finishes in both the recent World and National Championships and will be hoping to climb the top step of the podium this time, whilst Billy Wood from Hampshire is the reigning NHRPA Champion. Les Compelli, former British Champion Dave Casey and Sean Kenny are expected from the Republic of Ireland, with Chris Crane, Mikey Godfrey and Gavin Murray other English stars expected to grid. Also on the bill over the weekend for the National Hot Rods will be the coveted Leslie Dallas Memorial Trophy, defended by Derek Martin.

A field of over thirty Superstox will provide the contact element to the weekend’s proceedings, as they chase the Mk2 Escort Shells and Spares European Championship. Current World and English Champion Jason Cooper from Norfolk heads a strong visiting contingent which also includes British Champion Jordan Salmon and Scottish Champion Bryan Forrest. Of the local drivers, Banbridge brothers Denver and Grattan Grattan and Portadown duo Lee Davison and Stephen Stewart are sure to star, with some hard hitting action guaranteed.

The largest field of Classic Hot Rods ever assembled in Ulster will contest the Irish Open Championship, and the iconic cars of the 70’s and 80’s are set to thrill the local fans. The Mk1 and Mk2 Escorts, Anglias and Austin A40’s are sight to behold in full flight around Tullyroan. Local Favourites Thomas Dilly (Dungannon) and Clive Richardson (Annaghmore) will be keen to win on home ground, but Sussex based Hughie Weaver, Scotland’s Kenny Purdie and Norfolk’s Gary Goodswen will be amongst the many visitors hoping to cause an upset.

There is a full programme of support action planned too, with racing getting underway from 4.30pm on Saturday and 1pm on Sunday at Tullyroan Oval.