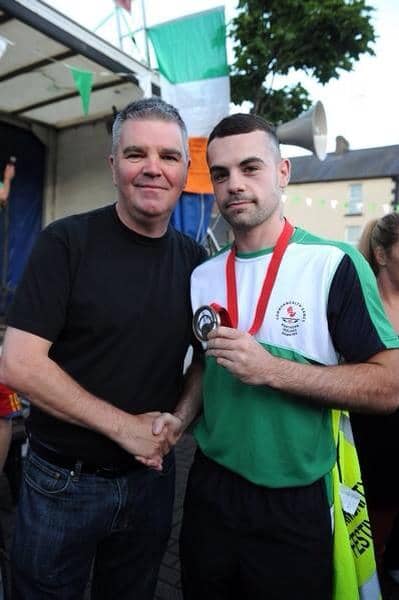 Sean – buoyed by the huge support back home – earned himself a bronze medal after making it through to the final eight in the men’s light welterweight (64kg) class at the Glasgow Games.

He received a rousing and fully deserved reception at his homecoming, where he thanked everyone for their support and took time to pose for photographs with all those keen to meet the hero of the hour.

Among those attending the boxing champ’s special street celebration was Newry and Armagh MLA Cathal Boylan, who paid tribute to the 23-year-old sportsman.

“Sean’s commitment, drive and success has made him a real role model to many young people across the greater Keady area,” the Sinn Fein Assemblyman told Armagh I.
“We are all proud of how well Sean has performed and we wish him well in future challenges as he will undoubtedly have a positive boxing future ahead.
“Sean’s victory will also be greatly celebrated by the Sean Doran Boxing Club in Keady, who of course are no strangers to international boxing success at the Commonwealth Games, as we all shared in Marty Renaghan’s victory back in 1994, when he won a silver medal in the men’s lightweight class.”
Main picture: Sean Duffy and Newry/Armagh MLA Cathal Boylan at the homecoming in Keady on Monday night, photographed by John Merry.
Read more news: