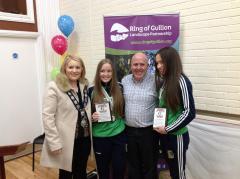 Three young boxers have been welcomed home triumphant with a huge crowd gathering to hail their success in the European Women’s Youth and Junior Boxing Championships in Hungary.

Newry, Mourne and Down Chairperson Naomi Bailie was on hand in Crossmaglen Community Centre last night (Friday) to present the girls with special awards.

A huge crowd gathered in the Community Centre to welcome the girls, who were dropped off at the venue in style by the local Fire Brigade.

Handing them each awards from Newry, Mourne and Down Council recognising their achievements Chairperson Naomi Bailie said all three of the girls were inspirational.

“It’s always fantastic when people from the area are chosen to represent the country but these three girls went one step further and got Team Ireland on the podium,” she said.

“The amount of dedication, talent, hard work and training the girls put into the European Championships is truly inspirational, especially when you consider they achieved all this while still dealing with the ordinary pressures of being young women. “As Chairperson of the new super-council I want to let you know that the entire council area of Newry, Mourne and Down, but South Armagh in particular, is immensely proud of you.”

“What a tremendous evening. I have to say I’m filled with immense pride to be from this area tonight. Not only did these tremendous ambassadors for Crossmaglen and Dundalk go to Europe to represent Ireland, but they really proved their mettle by bringing home this haul of medals,” he said.

“This is an incredible achievement but I have no doubt that we have yet to see the best of these athletes. When I look at the girls and the grit and determination they have displayed what I see are the Katie Taylors of tomorrow.”

“I must say I’m particularly pleased to see young women from the area excelling to such a level in sport, especially a sport not traditionally associated with women,” she said.

“These girls have shown us all what you can achieve with hard work and self belief. They are terrific role models, not just for the young women of south Armagh but for young women across Ireland.”

Pictures: Shauna and Orla, who attend St Joseph’s High School, Crossmaglen, with Principal John Jones, who presented them with a special award from the school, and Chairperson Naomi Bailie.