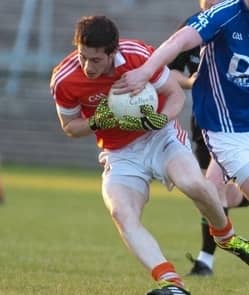 The senior footballers travelled to Clann Éireann on Sunday getting off to a slow start conceding two points in the opening period.

It took 18 minutes before the Tones got going, with James Martin’s effort rebounding off the crossbar and Niall Geoghegan being the first man to react, burying the ball to the Clann Éireann net.

Jonathan McCarron and James Lavery scored either side of a Clann Éireann effort but with the half time whistle looming, a speculative Clann Éireann shot lobbed goalkeeper Gerard O’Neill to give the home side a fortuitous goal.

Peter Nugent responded for the Tones in added on time to leave the sides level at half time 1-3 apiece. Points were traded at the start of the second half with Kieran Murray provider for the Tones, before Clann Éireann went on to gather four points in a row.

Connell O’Hagan was making his senior debut for the Tones in attack, but despite fouls by three Clann Éireann defenders on him in the closing seconds, the referee bizarrely awarded a free out. Clann Éireann went down the field from there to win a free, which was duly converted to give the two points to the home side.