A pulsating finish sees Armagh progress to fourth round 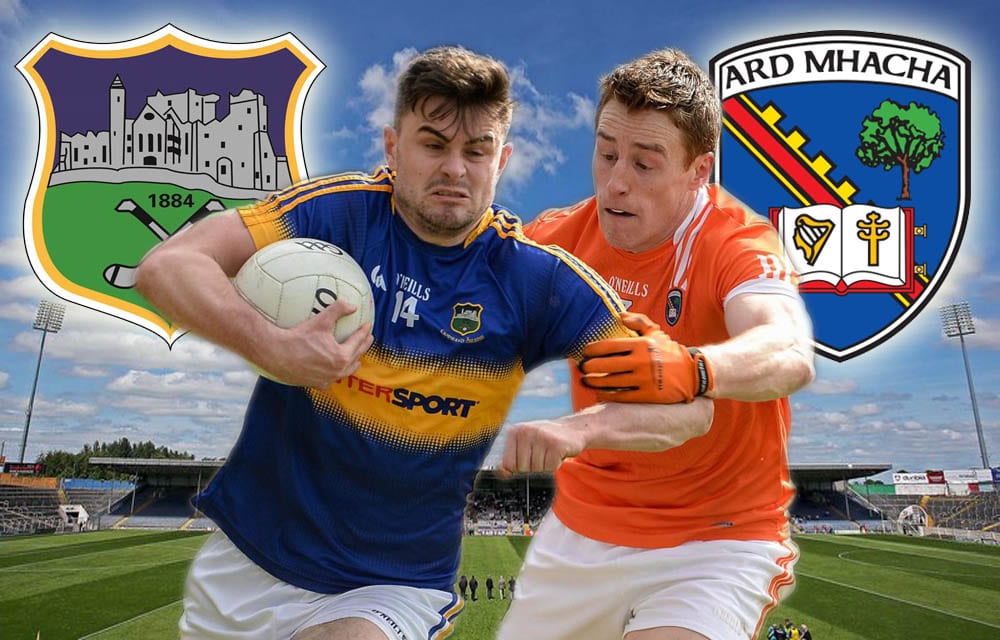 Armagh progressed through to the fourth round of the All-Ireland qualifiers after a pulsating victory over Tipperary in Thurles this afternoon (Saturday).

The Orchardmen will progress to the final qualifier for the first time in three years and did so with some breathless attacking.

Niall Grimley was the star of the show, hitting eight points in a game which saw Armagh dominate a second-half.

The victory will have been even sweeter given the fact a last-minute Michael Quinlivan goal denied Armagh promotion from Division Three back in April.

Quinlivan did manage to bag himself another goal today – a score which put Tipp’ four to the good early in the second half but that was about the height of his contribution throughout the eighty-plus minutes.

It was a nervy end as Armagh were forced to line the goal twice in the nine minutes of added-on time.

Despite criticism earlier in the championship, Kieran McGeeney can now look forward to a last-12 tie in a few weeks time.

The game began in Tipperary’s favour with Kevin O’Halloran opening the scoring with a delightful long-range free off the ground from the right.

The visitors responded through Gregory McCabe who was making his first championship start.

The Shane O’Neill’s clubman waltzed straight through the Tipp’ defence and with the outside of his right boot blazed between the posts, levelling the scores up after eight minutes.

Liam Casey put the hosts back in front before the impressive Niall Grimley opened up his account for the day.

Grimley’s second point came from another free moments after Jack Kennedy and Connor Sweeney had registered for Tipp’.

Then came a huge talking point in the game. A great bit of work by Jamie Clarke deep in the left-hand corner allowed himself some space to whip across a fantastic ball straight into the path of the onrushing Gavin McParland, who nipped in front of his man and slotted past the ‘keeper, into the net.

However, some controversy ensued as referee Paddy Neilan brought the play back and awarded Armagh a free for a foul on McParland, much to the consternation of the Armagh bench.

Captain Rory Grugan tapped over the resulting free from 14 years to level proceedings for a third time in the game.

The pace of the game increased as the rate of scores came with each passing attack.

O’Halloran and Brian Fox extended the Tipperary lead by two points before another splendid Niall Grimley point reduced the arrears.

Kennedy knocked over another free before Armagh ended another flowing counter-attack with a point. The move was initiated by Mark Shields, who placed it on a plate for McParland who took pointed with a cool head.

It was the turn of Aidan Forker to open his tally for the day; with two men hanging off him, the Maghreb man scored a fantastic point with the outside of his left, after the referee allowed the advantage to be played.

As the half drew to a close it was the hosts who took command of this enthralling encounter, with three points on the bounce through Kennedy, Josh Keane and Casey.

But with both side’s adopting a rather gung-ho approach to defending, Armagh were granted one last opportunity and a lightning counter, following a great block by Andrew Murnin, allowed Grugan to tap over an easy eighth at the end of a flowing attack in a pulsating half.

Kieran McGeeney would have wanted to elicit a response after the interval and he certainly got one when McParland swung over a beauty of a left-footed strike 25 seconds after the throw-in.

But just as Armagh looked to assert some control, Michael Quinlivan – the hat trick hero back in April – squeezed his way around James Morgan before burying past Blaine Hughes.

Andrew Murnin was then denied an immediate and emphatic response when he saw his goal-bound effort repelled by Ciaran Kenrick in the Tipperary goal.

Niall Grimley got his fifth and sixth point of the game with two straightforward frees but it was his seventh that showed a stunning bit of class.

The Madden man broke through the tackle of two players and with the swing of the right boot, reduced the deficit to a single score once more.

And it would be no surprise to guess that Grimley levelled the scoring with a long-range free from 45-plus metres.

Tipperary did end a terrible 20-minute scoring drought when Keane tapped over a free from the left.

Armagh responded once more, levelling for the sixth time, and it was a delightful dummy from McParland who slipped his marker before slicing it between the sticks.

And what McGeeney’s men had been threatening for the entire second half came when Jamie Clarke hoovered up a loose ball to put Armagh in front for first time in the game, with 10 minutes of normal time to play.

But Armagh’s undoing for most of this contest up until this stage was their indiscipline in the tackle from scoreable ranges and Conor Sweeney duly obliged, the sides even again.

Less than a minute later Stefan Campbell drew a huge roar from the travelling support with his first score since being introduced as a second-half substitute.

A pulsating finish saw a resolute Armagh defence dispossess a Tipperary attack; Stephen Sheridan broke free, accelerating beyond desperate lunges to stop him before shipping the ball to McParland who laid off Clarke who rounded the ‘keeper to slot home and put four between the sides.

It was a huge moment in the last minute of normal time.

Conor Sweeney added a free for Tipperary who failed to score a single point in the second half from play. And that trend continued deep into injury time with Keane knocking over another.

Michael Quinlivan went for goal with a 14-yard free but the Armagh wall saw it out for a ’45 and with two minutes over the allotted seven, the Tipp’ goalscorer had another chance. This time his effort came back out only for Phillip Austin to blaze over.

Armagh were the superior team and for the first time in three years, they progress to the fourth round of the qualifiers.

This was no smash and grab – it was a thoroughly deserved win over last year’s All-Ireland semi-finalists.