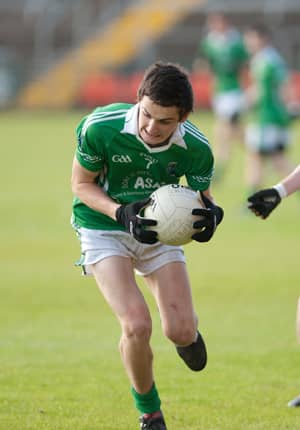 FOR the first time in the club’s history Shane O’Neills will compete at Armagh’s top table and team manager Martin Lynch cannot wait. Shane O’Neill’s Mark Feehan will be hoping to make an impact in this weekend’s league encounter against Whitecross. Photo by John Merry.

“I’m looking forward to the season big time,” Lynch stressed when speaking to Armagh I. “There’s a little bit of nerves but a good feeling, an absolutely good feeling.

“We have never been in Division One before so this year it’s a massive step for the club. For me personally it;s a double bonus as I never got to play in Divison One as a player.

“Our aim would most definitely be to remain there and if we were to do that it would be a big achievement because as it’s happens so many teams go up and come straight back down again.”

Lynch, who has been at the helm five years, knows all too well the task at hand for his young side in the coming months

Shane O’Neill’s start their campaign away to Whitecross this Sunday (however due to renovations their first few ‘home’ matches will be played away from their normal ground) and Lynch is targeting two points.

“The first match, every team will be up for that in a new league. It’s very important for Shane O’Neill’s to get a winning start but I’m sure Whitecross are also thinking the same – they’ll be saying ‘we don’t want Shane O’Neill’s coming down and beating us’.”

For the first time in a long time – if ever – Shane O’Neills will be competing in the same division as close neighbours Carrickcruppen and with the pair due to meet in the latter part of the league – divisional survival could hinge on that result.

“That game is a long way down the line – of course it would be nice to think that going into that game we would stay up if we beat Carrickcruppen but that’s a long way away yet.”

With senior league status but competing in the Intermediate Championship, Lynch also believes a good couple of months in the top tier could give his side the upper hand come August.

“In Division One teams are very sharp and that’s not taking away from any other teams at all but I would like to think that the sharpness of those other teams would give us an edge. Playing against the best players week in and week out will give you that advantage.”