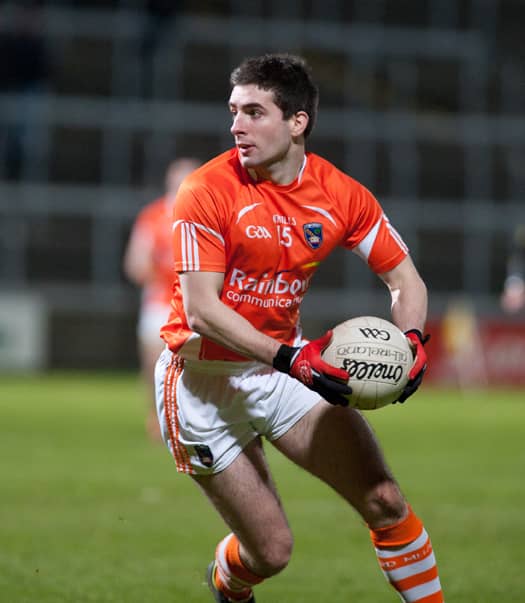 WITH this season’s league cut by seven games from 22, a good start could set the tone for the whole season – that’s the view of Armagh and Tir na nOg forward Brian Mallon ahead of this weekend’s curtain raiser. Brian Mallon in action for Armagh during this year’s National League campaign. Photo by John Merry.

Mallon’s club Tir na nOg travel to promotion hopefuls Madden this Sunday in the opening weekend of the Intermediate League.

Speaking to Armagh I, Mallon told of the Portadown club’s ambitions for the year and returning after Armagh’s league campaign.

“I’m definitely looking forward to the club season this year,” he said. “It’s good to get back to the club.

“We probably looked upon last year more to building a team for the future and putting in some foundations for further down the line.

“I think our ambition for the year is to get a good start and maybe push for promotion but Madden away in our first game is a real tough opener. They are a good side and showed us that in the Championship last year.

“We’ll be looking at ourselves however and with only 15 games in the league this year a good start is so important. If you lose one or two games early on you could find yourself in a battle at the wrong end of the table.”