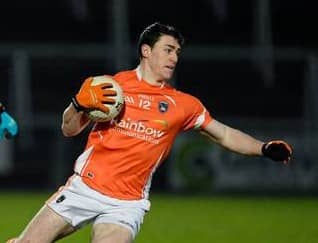 Armagh’s 100 percent win record in Division Three finally ended after Fermanagh scored with the last kick to earn a point at the Athletic Grounds.

Ryan Jones hit the decisive score for the visitors deep in injury time to take a share of the spoils and leave the sides level at the top of the league.

Kieran McGeeney’s men were leading by five points half way through the second half, but an unanswered onslaught left the home side reeling.

The first half began with Armagh playing with a huge wind at their back and they really made that count in the early parts of this contest.

However, it was the impressive Sean Quigley who opened the scoring after just two minutes for the visitors.

Rafferty was equally adept from the dead-ball, knocking over two from distance to stretch Armagh’s lead to two points after seven minutes. He added another from play on 15 minutes before Micheal McKenna got in on the act.

He slotted over with the left on 21 minutes after some fine build-up play from Aaron Findon and Andy Murnin.

Then came the Armagh goal, again great play from McKenna, who showed magnificent strength to stay on his feet after a shove on the back, to smash past Thomas Treacy in the Fermanagh goal.

Aidan Forker added another on 23 minutes to extend the Orchard’s lead to eight points.

Pete McGrath’s side needed to stem the flow of the game and that’s exactly what they did, firstly with a Quigley point, and then a fantastic individual goal from Ruairi Corrigan, who weaved his way through the Armagh defence before slotting past Niall Geoghegan.

Thomas Corrigan reduced the deficit to three on 30 minutes but Michael Murray had the final say of the half with a great drive from distance to leave the score 1-07 to 1-03 at the break.

Ethan Rafferty opened the scoring in the second half with Sean Quigley responding shortly after.

Eugene McVerry took it back to four points shortly after arriving as a second-half substitute.

The two sides traded points on 50 minutes with Richard O’Callaghan pointing for the Lakeland county and then Murray adding a marvellous second point from distance.

That was to be it on the scoreboard for the hosts as Fermanagh hit five unanswered points in the closing stages. Quigley managed three with Ryan Jones hitting the other two.

The turning point late in the game came when the Armagh players reacted after a free was awarded to them, however, with that decision revoked, Fermanagh made them pay with a vital league point.