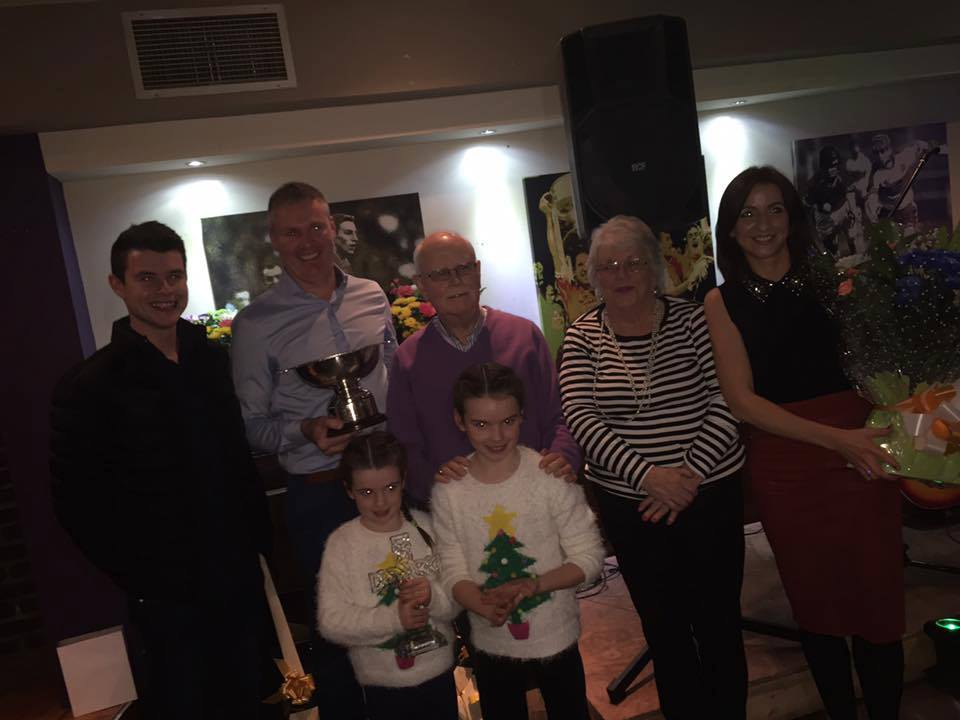 The award, reserved for those who have made a significant contribution to the club over the years, was initiated in 2002/2003 at a Gala Night to celebrate Armagh’s victory in the 2002 All-Ireland Final and has been presented to members of great renown such as Harry Loughran, Eugene Mee, Petie Mee, Gerry Murphy and Brian McGuinness amongst others.

During the proceedings, John’s illustrious career was recalled beginning with his early days as a young inspirational U-12 captain and how he went on to captain Keady Dwyers at every age level with much success.

At school, he was the Captain of the St. Patrick’s High School 5th Year team and received the Sportsman of the Year Award in 1995.

John was drafted into the county minor team at the age of 16 and transferred from Keady to St. Patrick’s Armagh to complete his A’levels.

He played at midfield during his two years at St. Patrick’s and captained the side that went unbeaten in the league before narrowly losing out to St. Patrick’s Dungannon in the 1997 MacRory Cup Final.

His efforts were rewarded with an Ulster College’s All-Star. John had captained the county minors and, while his studies took him to the University of Ulster Jordanstown, his reputation as a fiercely committed and steadfast county player saw him called up to the Armagh U-21 team.

Indeed, at the tender age of 19, John was also asked on to the Armagh Senior panel.

In 1998, Armagh won their first ever Ulster title at U-21 level and John was instrumental in that one-point win over Derry.

The following year, he was captain of the U-21 county team. In Jordanstown, John soon found his way to the football field and captained the team that won the All-Ireland Fresher’s Ryan Cup.

John’s senior county debut came in a one-point defeat to Donegal at the Athletic Grounds on the 31st October 1999. Armagh had won their first Ulster Championship in 17 years that summer and were a team on the rise. John played a key role in midfield for Armagh in these glory years and won Ulster Championships in 2000, 2002, 2004 and 2005, Armagh’s first and only National League Division 1 in 2005 and, of course, Armagh’s first and only All-Ireland Senior Football Championship in 2002.

For John, the Ulster Championship win against Tyrone in 2005, played in Croke Park, was bitter sweet as he had been injured, as the result of a late challenge, in the drawn game. John’s recovery from such an horrific injury was inspirational and his name was known the length and breadth of Ireland for his determination to get back playing football.

Despite his best efforts, however, John was forced to retire from inter-county football in 2006 but continued to play the following year with his club, Keady Michael Dwyers. His last game in the green and white was a league game against St. Peter’s in Lurgan.

After a short break, John was back involved with his club as Coaching Development Officer and developed a coaching programme and coaching resources for all coaches within the club. In 2009, he became manager of the Keady Michael Dwyers’ senior team who went on and won the inaugural Sean Doran Memorial Cup against Armagh Harps, won Armagh League Division 3 and reached the Armagh Intermediate Championship Final losing out to Newtown.

John is currently involved with Keady Dwyers where he has developed a new strategy for coaching of their underage teams. He will also spend time with each of the management teams and their players in a bid to further their development.

Last night, John was surrounded by family and friends as he received the Damien and Cathy Hughes Perpetual Cup from Ciarán Hughes on behalf of the Hughes family. He received a standing ovation from all in attendance as his name was cemented in the Keady Dwyers Hall of Fame for all eternity. Well done john!