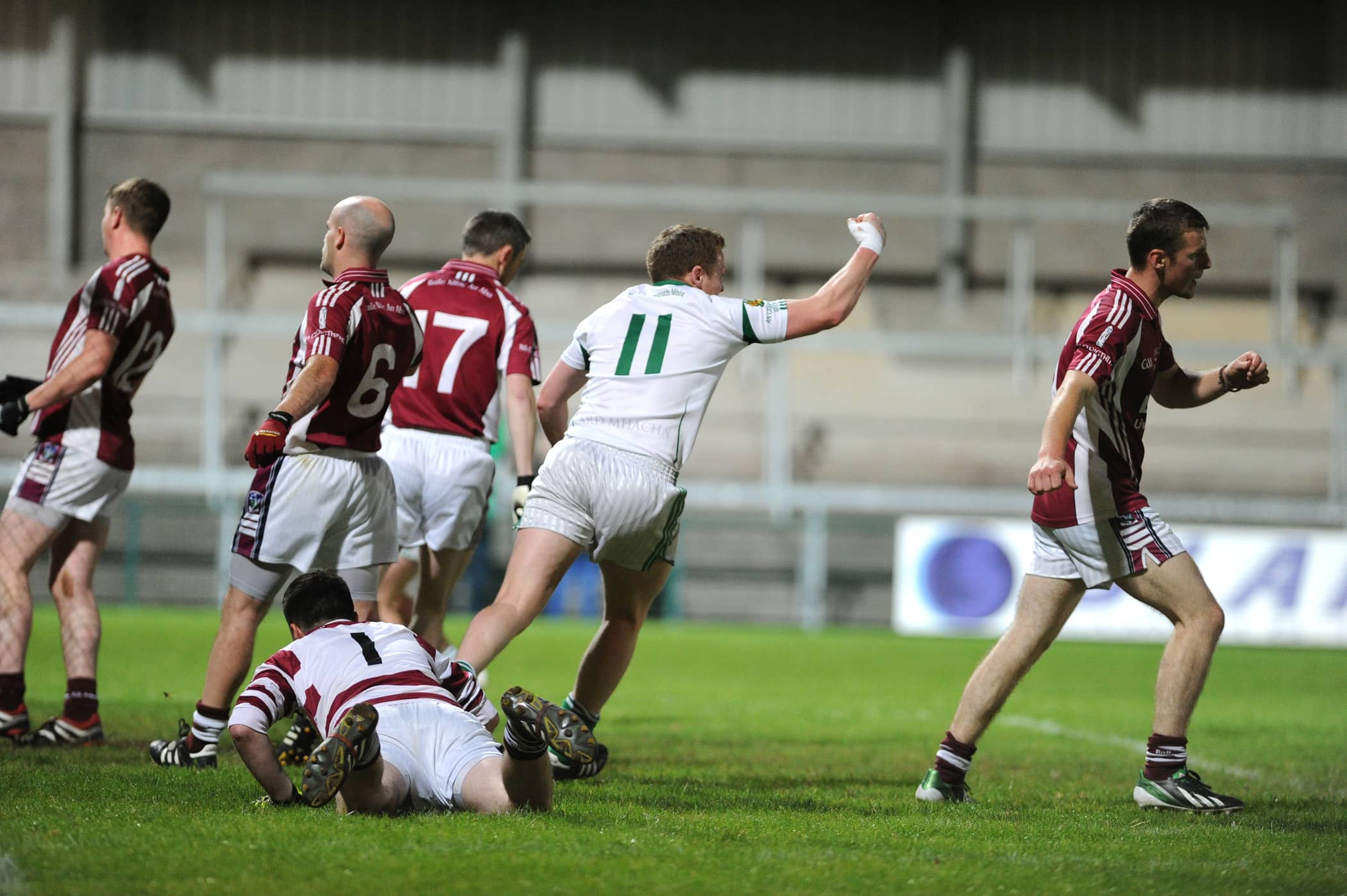 Granemore had to dig deep to grind out a victory over their neighbours Ballymacnab in what was an exciting encounter at the Athletic Grounds in Armagh last night (Friday).

Granemore made a bright start to the game and grabbed some early scores to give them a four point advantage eight minutes into the game. The Nab soon rallied forward and reduced the deficit to just one point going into half time. It turned out to be a point for point second half, but a goal from Jason O’Neill proved to be the pivotal strike as Granemore came out on top by one. The impressive Jason O’Neill scored a great opening point with his left foot, as he quickly turned his marker before lashing over from 30 yards.

Christopher O’Connor scored a free kick after Ryan Rafferty was brought down out wide on the left hand side. This was shortly followed up with a point from Shane Rafferty after a great team move which was started by Ryan Rafferty.

Rory Grugan who was definitely one of the best players on the night, if not the best, got Ballymacnab’s first score with a long range left footed effort.

Gavin McParland added another with a free kick off the ground from quite a tight angle on the right, to leave Ballymacnab trailing by just two points midway through the first half.

The game began to get quite physical at this stage as both teams had brushed off all nerves and were well tuned into the game. There were a number of hard hits and off the ball clashes but this didn’t get out of hand and was probably to be expected, with both teams showing real determination to come out on top.

A great example of this determination was shown on the 20th minute when Finbar Conroy bravely leaped to catch the ball in his own six yard box to prevent a goal knowing he was going to take some heavy knocks from the Ballymacnab forwards on his way back down. Conroy was hurt but fortunately for Granemore he was fit to continue.

Ballymacnab began to put plenty of numbers forward, but they really struggled to break through a well structured Granemore defence, and on the occasions they did find space to shoot they were regrettably wasteful and ended up kicking five wide in the first half.

Ballymacnab were certainly seeing more of the ball but they simply weren’t making their rivals pay, and Granemore went in at half time leading 0-06 to 0-04.

The Nab finally got their shooting boots on in the second half, two tidy scores from Gavin McParland and one from Damien McGeown turned things around and put Ballymacnab ahead just four minutes into the second half.

Barry Toner was introduced for Granemore at half time made a strong impact on the game and levelled things up again on the 41st minute.

Jason O’Neill helped his side take the lead when he showed great pace to meet Barry Toner’s pass before quickly turning on to his ever reliable left foot and striking the ball over from distance. Granemore responded to an equalising point Gavin McParland’s by smashing the ball into Ballymacnab’s goal. Paudie Hollywood burst forward on the left hand side and fed the ball to Jason O’Neill who held his nerve quite admirably and put a powerful strike past Sean Hughes.

Rory Grugan responded brilliantly for the Nab and kicked three great scores consecutively to tie the game with five minutes to go.

Brian McCone fisted the ball over the bar to give Ballymacnab what looked like a match winning lead, and things got worse for Granemore when Jason O’Neill was sent off on the 58th minute.

Granemore went in to injury time trailing and one man short but they never lost hope, Christopher O’Connor levelled things up with his third point of the night.

Stunningly in the second minute of injury time Barry Toner brought every Granemore supporter to their feet with the match winning strike. Toner picked the ball up on the right and accurately knocked it over the bar.

Ballymacnab really tried to fight back in the dying seconds but Granemore put everything behind the ball to hold their lead and were successful with their efforts as the referee blew the full time whistle shortly after sending Jack Grugan off with a straight red card.