Clash of the Titans on ladies club championship finals day! 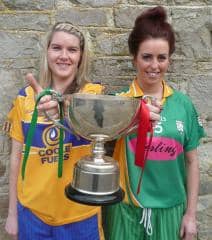 Saturday’s Armagh club championship finals day is set to feature some mouth-watering match-ups between the leading ladies of the Orchard run to the All Ireland semi-finals.

It was confirmed earlier in the week that the finals will take place as a double-header at the Athletic Grounds, a deserved platform for local ladies football’s finest talent.

This season’s Mackin’s Championship schedule has been dictated by the county team’s success but these tasty tussles should prove the perfect antidote to Armagh’s All Ireland semi-final defeat to Cork last Saturday.

There are set to be direct clashes between some of Armagh’s greatest players of all time, including Cruppen captain Caroline O’Hanlon against Clann Eireann star Sinead McCleary in the main match.

The first final will bring together two of the most competitive characters in Armagh history with ferocious Orchard defenders Caoimhe Morgan and Mairead Tennyson likely to be deployed around the middle of the field for their respective clubs.

All these stars are passionate about their clubs and no quarter will be asked or given when those who have united in the Orchard cause collide on finals day.

Sinead Finnegan, who has captained Carrickcruppen in league games this season when long-serving skipper O’Hanlon has been unavailable due to county commitments says Armagh’s result last weekend was never going to have a bearing on these domestic showdowns.

“If Armagh won, the girls wouldn’t have been holding back just because they’d an All Ireland final coming up and likewise they’ll have no problem picking themselves up from the disappointment of being beaten by Cork to fight hard for their clubs,” she insists.

“It’s fantastic for us having someone of Caroline’s calibre coming back in but the silver lining of having had to manage much of the season without the county contingent is that others have had to step up and take extra responsibility so the team has grown.

“We made the big breakthrough by winning our first senior county title in 2010 and were delighted to regain the trophy last year but securing back-to-back successes is a big goal for us.

“That won’t be easy because, with such strong rivalry between the clubs, Clann Eireann are sure to come hard at us to turn the tables from last year.  It will be another tough game but everybody’s really looking forward to it.”

McCleary and Niamh Henderson against O’Hanlon and Caitlin Malone should be a midfield battle well worth the admission money alone which could dictate the outcome of what is set to be another epic encounter.

This is the fifth senior final these clubs have contested in the past six seasons so a domestic decider has more novelty value for Silverbridge and Lissummon, neither of whom made last year’s Intermediate final.

Lissummon won a county final, at Junior level, the only other time Armagh reached the All Ireland semis but Silverbridge can cite a good omen of their own.

Last year’s Intermediate champions Grange had a captain from outside the Orchard county in Kerrywoman Geraldine Scully and Donegal girl Annie McCole will skipper Silverbridge this Saturday.

Silverbridge start slight favourites having edged both league games between these teams and comfortably beaten Crossmaglen and Ballyhegan en route to the final, while Lissummon have had to recover from half-time deficits against both Shane O’Neill’s and Sarsfields.

Lissummon, who heavily rely on the four formidable Marley sisters, can’t afford a similarly sluggish start here against a Silverbridge side starring the irrepressible Tennyson who is backed up by fellow county panellists Megan Burns and Roisin Murphy.