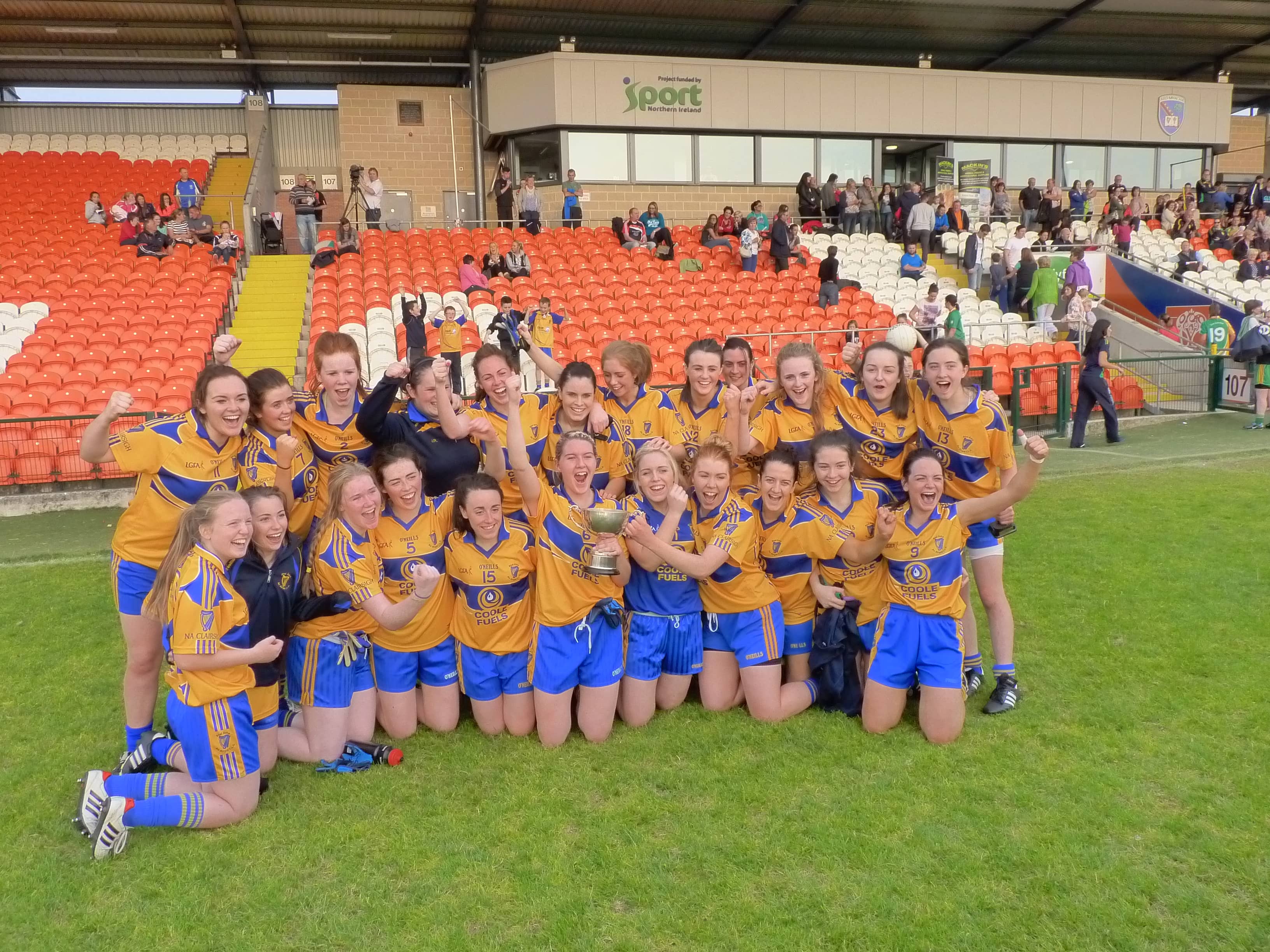 Clann Eireann, Forkhill and Silverbridge (pictured) were the successful sides in the three Ladies Championship Finals over the weekend.

Forkhill began the weekend with a fierce victory over Mullaghbawn in the Junior Championship Final Replay on Friday.  These two originally met last Monday and the game finished 1-12 to 1-12 after extra time.

Forkhill built a strong four point lead in that match and looked to be easing their way over the line, but Mullaghbawn had other plans.  They fought back quite dramatically which resulted in this Final going to a replay.  Forkhill made no mistakes second time round and got their hands on the cup in Silverbridge, winning 2-13 to 1-09.

The Intermediate and Senior finals were held in the Athletic Grounds on Saturday evening.  Lissummon and Silverbridge started the show with an entertaining game that came down to the very last kick of the ball.

Lissummon grabbed an early goal through Sarah Gamble who was smartly poaching and took advantage of a free kick that had fallen short, she instinctively tapped in before anybody could react.

The game was fairly end to end for the next 20 minutes with both teams having strong spells in possession.  The lively Niamh Reel grabbed a goal for Silverbridge to get them back in the game, but it didn’t take Lissummon long to respond.  Sarah Gamble got her second goal of the game which helped them go in at the break with a two point advantage.

The second half was quite hectic as both teams really went at it, Lissummon looked like they were grabbing a firm hold of the match as the clock ticked on.

Sarah Gamble was proving to be impossible to deal with and the lively forward kicked a fine point to give them a five point advantage with just over five minutes to play.

Things turned dramatically in the final few minutes, Mairead Tennyson scored a goal which sent off huge warning signs of a dramatic comeback, but there was very little time left and her side were still two points down.

They grabbed those two points in less than a minute to level the game but Lissummon restored their one point lead again with just two minutes left on the referee’s watch.

Then the unbelievable happened, Silverbridge, the side who trailed for the majority of the match broke Lissummon hearts in the final play.  Their full forward Denise Buckley edged her way into space in front of goal and smashed the ball home to secure victory in the most dramatic of ways.

The Senior Final had a big act to follow and didn’t disappoint.  This one may not have been just as dramatic, but the quality was at a very high standard.

Sinead McCleary and Caroline O’Hanlon got early scores on the board for their sides.  But Clann Eireann soon developed a steady four point cushion after 15 minutes and could have lead by more, only Martina Hoye fisted a major goal opportunity just inches wide of the post.

The Camlough side soon got back in the game when Caroline O’Hanlon was brought down inside the area.  The County captain stood up and calmly converted from the spot to make it 0-06 to 1-01 on the 21st minute.

Carrickcruppen then took the lead minutes later when Caoimhe Murray grabbed a goal to make it 2-03 to 0-08.  They didn’t manage to hold on to that lead for too long though, as Martina Hoye smashed a rebounder into the net after Aine Hoye’s shot came back off the crossbar.  This gave Clann Eireann a three point advantage at the end of a high scoring half.

The second started off quite evenly, with the finalists matching each other point for point.  Carrickcruppen were seeing a little bit more of the ball than their opposition, but were fairly wasteful in front of goal, and failed to close in on the lead.

Natashya Lennon scored an impressive point for Carrickcruppen to leave just two in it with less than ten to go, but a damaging strike arrived on the 57th minute.  Aine Hoye got the goal she deserved, the Clann Eireann corner forward struck the frame of the goal on a number of occasions, but made no mistake this time, with a neat finish.

Carrickcruppen made a big push in injury time but it was just too much to ask for.  Clann Eireann were the deserved champions when the full time whistle went, the match finished 2-15 to 2-11 in the end.