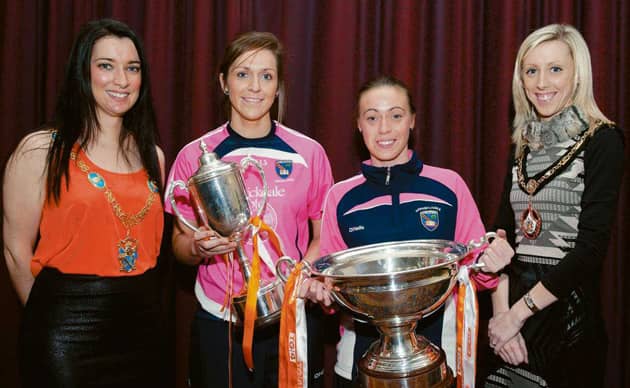 THE young female mayors of Armagh and Craigavon have come together from across the traditional divide to celebrate the significant success of the Orchard county ladies’ footballers in winning this year’s All-Ireland intermediate championship.

Although a Tyrone woman by birth and not in traditional territory for a DUP politician, councillor Lockhart was warmly received by the audience and offered fulsome praise for the team’s achievements in 2012 which included lifting the Ulster intermediate title.

After watching a re-run of Armagh’s Croke Park victory over Waterford on the big screens during dinner, the 27-year-old mayor expressed admiration for the commitment, fitness and skill levels of the players, who she described as inspirational role models for everyone in the local community.

In her speech, councillor Haughey, a lifelong Armagh Gael, highlighted the positive symbolism of having two young female mayors from across the community joining together in celebrating the achievements of successful sportswomen, including captain Mags McAlinden and Allstar Caroline O’Hanlon, who doubles up as a world-class netballer.